Larger, faster, fully equipped and more robust, its ergonomics is entirely designed to increase our rescue capacity and resist the extreme conditions of our operations at sea. Delivered on December 7, 2022, meet our new Easy 1 lifeboat, currently on its first missions at sea.

Max, who was able to test this new asset before the departure of the Ocean Viking from Marseille in mid-December, explains the numerous specificities of this unique tailor-made Rigid-Hulled Inflatable Boat (Rhib), a compendium of innovation in the maritime rescue field. 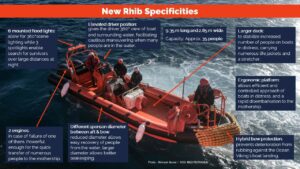 Max was one of the first rescuers to board the Aquarius in 2016. He knows many of the challenges faced by search and rescue teams in the central Mediterranean: boats “deflating and sinking with dozens of people who fell into the water in the middle of the night, clinging to anything they could“, the fateful moment of approach when “any movement of the crowd risks capsizing their boat“, the difficult transfer of the survivors from the lifeboat to the mother ship when “the waves are several meters high.”

He recalls these crucial issues with precision.

Current Search and Rescue manager at SOS MEDITERRANEE’s headquarters, Max has contributed to the continuous improvement of the teams at sea’s expertise, as well as their equipment. With the advice from many rescuers, he designed the specifications for this unique lifeboat and oversaw its manufacture. It is 9.35 meters long, that is 3 meters longer than its predecessor.

“In the specifications, we had indicated 107 specific requirements among which many are critical.

Innovation is at the very heart of our operations since the SOS MEDITERRANEE teams are constantly improving their protocols and techniques to rescue dozens, even hundreds of people crammed on a boat in distress in a very short time: these techniques related to “mass” rescues are unprecedented. There are currently no lifeboats on the market that are adapted to such operations at sea.

We needed a tailor-made tool, whose main function is to evacuate people from a situation of imminent danger to a place where they are safe.

Every element has its purpose, from the smallest electronic device to the lights that must not blind the people being rescued while giving us 360-degree visibility at night, in case one of them should fall overboard.

What we are really trying to do is to reduce the risks, that is, to prevent people from dying in the central Mediterranean. The main cause of death is drowning. Secondly, suffocation from being crushed during the shipwreck. To prevent drowning, we must be able to deploy many life jackets and mass flotation devices very quickly. On this new boat, we have therefore provided additional space on deck and attachment points for numerous lifejacket bags. To hoist people who fell overboard faster, we reduced the diameter of the inflatable sponson in the middle section of the boat, but not too much either to prevent people from falling overboard once they’re in.

The lifeboat also had to:

I don’t like to be too ‘romantic’ about our lifeboats, they are mainly working tools. But to me, they are also part of the lifesaving team. They are the ones who ensure the safety of the people in distress and of our teams; they are almost an extension of our bodies: without them, we would never be able to accomplish all that we do to rescue these people in distress.”