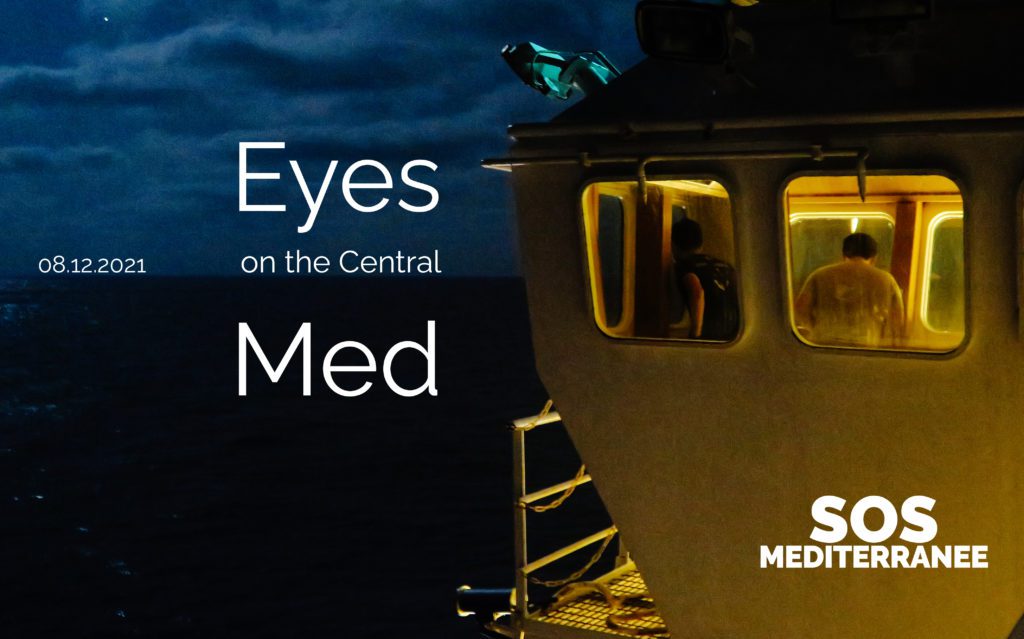 [18.11. – 06.12.21] The following publication by SOS MEDITERRANEE intends to shed light on events which unfolded in the central Mediterranean in the past three weeks. It is not intended to be exhaustive, but rather to provide a general update on maritime search-and-rescue-related matters occurring in the area we have been operating in since 2016, based on public reports by different NGOs, international organisations and the international press.

More than 75 people perish as boat capsizes off Libya, high number of departures in November

Despite challenging weather conditions, the number of departures of unseaworthy boats from Libyan shores remained high in November. With 21 rescue operations, it was the month with the highest number of rescues by NGOs since January 2020.
November was also marked by tragic loss of life in the central Mediterranean. More than 75 people are feared to have lost their lives in a shipwreck that occurred off the Libyan coast on November 17. As the Guardian reported, 15 people were rescued by fishermen and disembarked in Zuwara, Libya. According to the survivors, approximately 92 people were onboard the boat when it capsized in stormy weather conditions. This latest tragedy brings the number of lives lost in the central Mediterranean this year to 1,303, according to the International Organisation for Migration.

The phenomenon of large fishing boats or other vessels carrying more than 200 survivors has continued in the latter half of this year: On November 25, journalist Angela Caponnetto published a video of an Italian Coastguard patrol boat rescuing almost 300 persons from an overcrowded boat close to Lampedusa. A few days later, the Italian coastguard reportedly rescued 244 people from an overcrowded boat off Italy’s Calabria region.

The same day, the Tunisian Navy assisted almost 500 people close to the Tunisian Kerkennah islands, according to Anadolu Agency. Alarm Phone had continuously relayed alerts to the distress case since November 24.

Also on November 24, the Times of Malta reported that one out of 43 people rescued by the Maltese Armed Forces passed away upon arrival on shore. There were no reports on the cause of death.

The crew on Sea Watch 4 rescued 482 people in seven rescue operations between November 18 and November 22. Among the survivors were a mother who gave birth on a boat in distress during the attempt to cross the central Mediterranean and her newborn baby. After multiple medical evacuations of a total of 21 survivors and a stand-off in harsh weather conditions, the Sea Watch 4 was assigned Augusta, Sicily, as a port for the disembarkation of the survivors.

186 survivors rescued by the team on MSF’s Geo Barents were allowed to disembark in Messina, Sicily, on November 20. The bodies of ten people who lost their lives on an overcrowded wooden boat and were recovered by the rescue team were also brought to shore.

On November 21, the crew on sailing boat Astral of Spanish NGO Proactiva-Open Arms assisted two boats in distress carrying 60 and 70 persons respectively until Italian authorities performed the rescue and brought the survivors to shore.

French NGO Pilotes Volontaires, who operated the surveillance aircraft Colibri 2 in the central Mediterranean, announced that they have moved their operation to support search and rescue on the Atlantic Route around the Canary Islands.

1,563 people were intercepted at sea and returned to Libya by the Libyan coastguard in the past three weeks according to the International Organization for Migration (see here, here and here). Meanwhile, Alarm Phone reported that shots were fired from a Libyan Coastguard patrol boat towards a boat in distress in the Maltese Search and Rescue region and forcibly brought people back to Libya on November 24.

United Nations special envoy for Libya Ján Kubiš resigned from his role in late November, Foreign Policy reported. Kubiš is planned to remain until a replacement is found, however it is unclear whether this will happen before the Libyan elections which are planned for December 24.

At a conference of Mediterranean states in early December, Libyan Minister of Foreign Affairs Najla Mangoush criticized EU policies of financially supporting entities in Libya with the aim of deterring migrants from reaching Europe. According to the Associated Press, Mangoush said that sending money to Libya would never suffice “to address the root of the problem”.