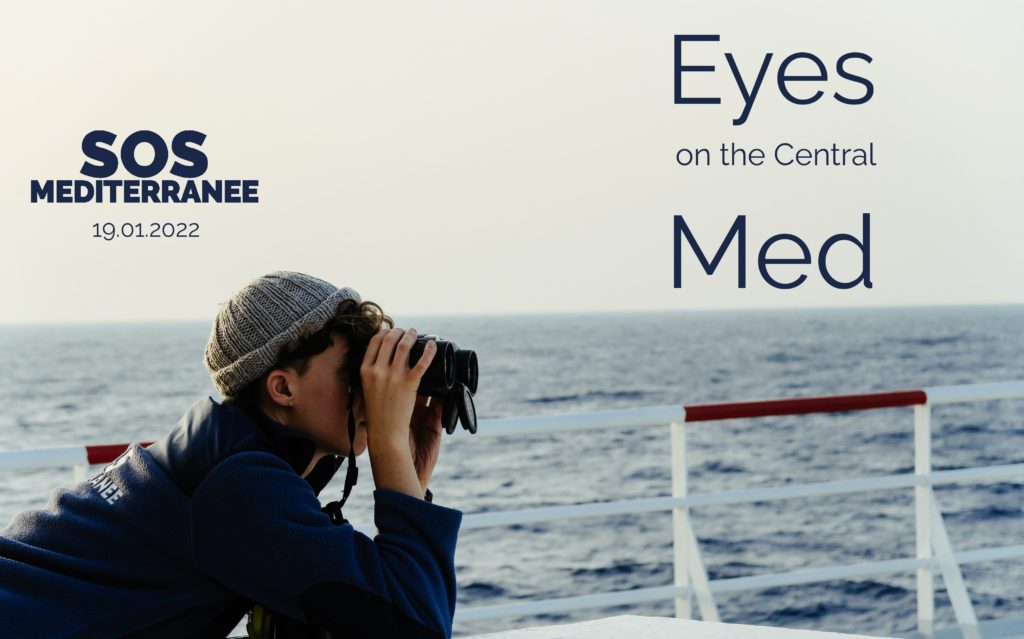 [07.12.21 – 19.01.22] The following publication by SOS MEDITERRANEE intends to shed light on events which unfolded in the central Mediterranean in the past four weeks. It is not intended to be exhaustive, but rather to provide a general update on maritime search-and-rescue-related matters occurring in the area we have been operating in since 2016, based on public reports by different NGOs, international organisations and the international press.

December was one of the deadliest months of 2021 in the central Mediterranean. On December 17, the Italian media reported a shipwreck off Lampedusa. At least one woman died in the wreck. On December 21, Flavio di Giacomo, spokesperson for the International Organisation for Migration (IOM), reported the death of 163 people off Libya. 61 bodies were recovered off Sabratha and 102 people went missing off Surman. Later that week, on December 26, the Libyan Red Crescent recovered 28 corpses on the beach of Al-Alous, on the Western coast of Libya.

Despite challenging weather conditions, the number of departures of unseaworthy boats from the Libyan shores remained high in late December. 19 rescue operations were performed by NGO rescue ships last month and 1,407 people in distress were rescued.

On December 16, the crew on Ocean Viking, rescue ship chartered by SOS MEDITERRANEE and operated in partnership with the International Federation of the Red Cross and Red Crescent Societies (IFRC), rescued 114 people in distress from a rubber boat in distress in international waters off Libya, including two newborn babies. After 7 requests for a Place of Safety to the competent maritime authorities, Trapani was eventually assigned a port of disembarkation on Christmas Eve by the Italian authorities. All the survivors disembarked on December 25, 9 days after the rescue. On January 10, after more than 11 hours of inspection, the Ocean Viking was detained by the Italian authorities in the port of Trapani, Sicily, just over a year after the ship’s release from a five-month administrative detention.

Between December 16 and December 17, the crew on Sea-Eye 4 rescued 223 people in four rescue operations. After four medical evacuations by the Italian coastguard, the Italian authorities assigned Pozzallo as a Place of Safety for the remaining survivors onboard on December 23. Everyone disembarked the day after in the Sicilian port.

On December 16, the crew on Rise Above rescued 66 people from a wooden boat in distress south of Lampedusa. They were allowed to disembark in Porto Empedocle on December 20.

Between December 17 and December 24, the crew on MSF rescue ship Geo Barents rescued 558 people in distress in eight rescue operations. On December 28, Augusta was assigned as a Place of Safety. The disembarkation process was completed on December 30. The Geo Barents started a new mission on January 14.

Between December 24 and December 26, the crew on Sea-Watch 3 rescued 446 people in five rescue operations. After one medical evacuation and supplies provided by the Italian coastguard, Pozzallo was eventually assigned as a Place of Safety for the remaining survivors onboard. The disembarkation was completed on January 2.

On January 3, the crew on Louise Michel announced their new mission in the central Mediterranean, 16 months after their last operation. The day after, they rescued 31 people from a drifting wooden boat after being informed by Sea-Watch aircraft Seabird. Another 80 people climbed and stayed the night on the Shell-platform Miskar before being brought to Tunisia by the Tunisian Navy. The 31 survivors onboard Louise Michel could eventually disembark in Lampedusa as ordered by the Italian authorities. The ship left again toward the central Mediterranean on January 16.

15 months after her last operation, on January 15, the Mare Jonio, rescue ship of Mediterranea Saving Humans resumed her operations in the central Mediterranean.

One out of two persons fleeing Libya were returned in 2021, number of interceptions three times higher than in 2020

According to the IOM, in 2021, about one out of two persons attempting to flee Libya via the sea were intercepted and forcibly returned. Overall, at least 32,425 people were intercepted by the Libyan coastguard in 2021, almost three times more than in 2020. In the period of December 19-25 only, 969 people were forcibly returned to Libya. Meanwhile, a new report by Euro-Med Human Rights Monitor describes the Libyan authorities’ involvement in “illegal practices against migrants and asylum seekers”.

In Libya, on December 2, the UNHCR announced the closure of its Community Day Centre in Tripoli due to protests that took place in front of the building since the raids conducted by the Libyan authorities on houses and temporary accommodations used by migrants, asylum seekers and refugees in Gargaresh area on October 1. Since then, hundreds of people have lost their shelter and have been left homeless without a solution. On January 10, according to Associated Press, Libyan security forces violently broke up the protests and arrested more than 600 people sitting in front of the Community Day Centre. They were sent to a detention center in Ain Zara.

On December 22, the presidential election scheduled to begin on December 24 has been postponed after authorities failed to confirm a list of eligible candidates.

Duty to assist at sea reiterated by Italian judge

On December 23, charges against Carola Rackete were dropped. Micalea Raimondo, Court of Agrigento’s judge said that the German captain of Sea-Watch “acted in the performance of her duty of rescue under national and international maritime law” when entering Italian port of Lampedusa in June 2019 with 40 survivors onboard.