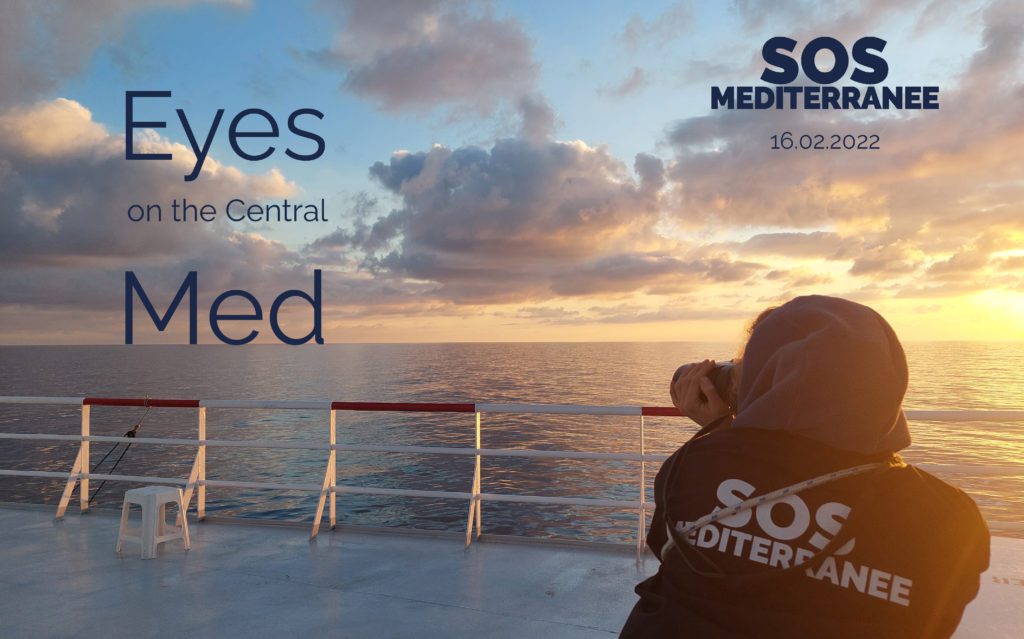 [03.02. – 16.02.22] The following publication by SOS MEDITERRANEE intends to shed light on events which unfolded in the central Mediterranean in the past two weeks. It is not intended to be exhaustive, but rather to provide a general update on maritime search-and-rescue-related matters occurring in the area we have been operating in since 2016, based on public reports by different NGOs, international organisations and the international press.

A few days of good weather led to a high number of departures from the Libyan coast around the weekend of February 11 to 13.

The Ocean Viking conducted 5 rescues within 48 hours. The IFRC and SOS MEDITERRANEE teams on board now provide care for 247 people, including 52 unaccompanied minors and a 5-month-old baby. The Ocean Viking was alerted to three of the distress cases by NGOs Alarm Phone and Pilotes Volontaires, while one unseaworthy boat was spotted from the bridge of the vessel and another one was located with the support of EU aircraft “EAGLE II” that dispatched multiple MAYDAY relays for the boat in distress via VHF.

During the same weekend, more than 500 people reached Lampedusa or were rescued by the Italian authorities off the island’s shores, according to La Sicilia. Among them were 18 people who reported that three persons remained missing at sea after their boat was accidentally rammed by Libyan fishermen. Five people had reportedly gone overboard as a result of the collision, but only two managed to climb back onto the boat. According to InfoMigrants/Ansa, the prosecutor’s office of Sicily’s Agrigento region has opened an inquiry for manslaughter and aiding and abetting clandestine migration.

245 people were intercepted by the Libyan Coastguard and forcibly returned to Libya during that same weekend, the International Organisation for Migration reported.

The interceptions of the past weekend bring the total number of forced returns to Libya – which is not a safe place for disembarkation – by the Libyan Coastguard to 1721 so far this year, according to the IOM. On February 7th, 3 dead bodies were retrieved off the coast of Libya, bringing the total number of people who perished in the central Mediterranean this year to 123, according to the IOM’s Missing Migrants Project.

163 people were intercepted off Sfax and returned to Tunisia by the Tunisian Coastguard during the first weekend of February, InfoMigrants reported.

A report by the Council of Europe Human Rights Commissioner released this week states that “the decrease in Malta’s search and rescue efforts over the past few years, together with its reported failure to assist migrants rescued by NGO ships and its restrictive disembarkation policies continue to pose significant risks to the human rights – including the right to life – of refugees, asylum seekers and migrants in the Central Mediterranean”, as Malta Today reports. “The Commissioner calls on the Maltese authorities to ensure adequate rescue capacities in Malta’s search and rescue region, enhance the effective coordination of rescue operations, and effectively investigate any allegations of omissions to provide immediate assistance to persons in distress at sea,” the report continues.

The Associated Press reported that the European Union is planning to provide more patrol vessels to the Libyan Coastguard before the summer. Three new and two refurbished boats are to be delivered to Libya, according to an EU spokesperson.

This statement of intent comes amid political turmoil in Libya: The country’s Tobruk-based House of Representatives on February 10 appointed former Interior Minister Fathi Bashaga as the new prime minister after the incumbent prime minister Abdul Hamid Dbeibah failed to hold national elections in December, Al Jazeera reported. According to Deutsche Welle, the UN have confirmed their continued support for Dbeibah, while General Haftar’s Libyan National Army welcomed the appointment of Bashaga. Elections are reportedly to be held in June, but no official date has been set yet.

In the meantime, the situation for those held in arbitrary detention in Libya remains unchanged: According to a report by NGO Libya Crimes Watch, three men of Moroccan origin were tortured and killed in Al Mayah detention centre in western Tripoli, Domani reported.

Two former guards of a Libyan detention centre were sentenced to 20 years in prison by a court in Sicily according to InfoMigrants. The two men of Bengal origin were reportedly recognized by four former Bengal detainees as guards of the notorious Zuara detention centre.