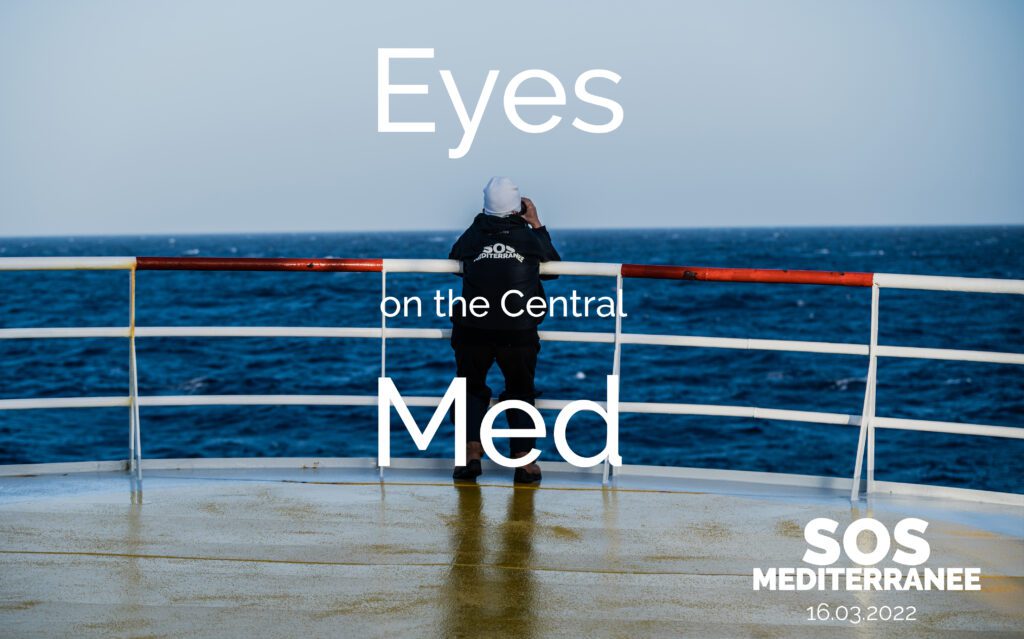 [17.02. – 15.03.22] The following publication by SOS MEDITERRANEE intends to shed light on events which unfolded in the central Mediterranean in the past two weeks. It is not intended to be exhaustive, but rather to provide a general update on maritime search-and-rescue-related matters occurring in the area we have been operating in since 2016, based on public reports by different NGOs, international organisations and the international press.

More than 500 people rescued by civil NGO ships from imminent distress at sea over the four past weeks.

Following her first mission of 2022, the Ocean Viking disembarked 247 people rescued in five separate operations, in Pozzallo, Sicily, during the weekend of the 19th and 20th of February.

The Sea-Watch 4 rescued 129 persons in two rescue operations on 19th of February. On 25th of February, Trapani, Sicily, was assigned to disembark the survivors. However, due to bad weather conditions, on 26th of February, Italian authorities eventually designated Porto Empedocle, Sicily to disembark.

On March 5th, the Open Arms rescued 28 people from an overcrowded wooden boat. After one week of waiting onboard, the Open Arms was assigned Augusta, Sicily to disembark the survivors. The disembarkation took place on March, 12.

Between 5-6 March, the MSF crew onboard the Geo Barents rescued 111 persons in two operations. 80 people were rescued from a drifting rubber boat, including women and children in the first rescue operation. The second rescue occurred in the Maltese Search and Rescue region (SRR) after 6 hours of search by night, in difficult weather conditions. Italian authorities assigned Augusta, Sicily, to disembark the survivors on March, 14.

On March 14, the Sea Eye 4 announced her departure towards the central Mediterranean following 10 weeks of shipyard.

On 22nd of February, three patrol boats of the Italian Coast Guards rescued 573 persons from two overloaded fishing boats found in unfavorable weather conditions in the Italian SRR. Survivors were then transferred to the Diciotti ship, who disembarked them in Augusta. During the rescue operation, a lifeless person was recovered. She had been dead for several days according to survivors.

One dead and three injured in a tragic interception by Libyan coastguard amidst continued surge of forced returns to Libya.

Sea-Watch reported having witnessed two interceptions on the 28th of February and 5th of March from their aircrafts, Seabird and Seabird 2. During this second event Sea-Watch reported the presence of Frontex drone in the same area.

According to InfoMigrants, on the night of February 18-19, during an interception the Libyan coastguard fired live ammunitions at a boat with approximately 80 people onboard. One person died and three others were injured. IOM condemned this event mentioning “the excessive use of force by the Libyan Stabilization Support Apparatus”.

On Saturday 19th, Pilotes Volontaires denounced a “violent and dangerous” interception of an embarkation by the Libyan Coast Guards in the Maltese SRR. 5 people fell in the water according to the French NGO.

Several shipwrecks were reported during the four last weeks

According to InfoMigrants, at least 50 persons died in a tragic shipwreck on the 27th of February off the coast of Sabratha. Over a dozen bodies were reported to have washed-up on Libyan shores in the following days.

On the 28th of February, the Tunisian ministry of defense reported that at least nine persons perished in a shipwreck off Tunisia as they tried to cross the central Mediterranean to Italy, while another nine were rescued by the Tunisian navy.

According to The Guardian, at least 19 persons are presumed missing after their embarkation capsized on the 12th of March off the coast of Libya. The embarkation would have left from the eastern city of Tobruk. Three migrants survived to the shipwreck and were taken to the hospital.

Since beginning of 2022, at least 193 people are reported to have perished or gone missing in the central Mediterranean, and 3,091 were intercepted and forcibly returned to Libya.