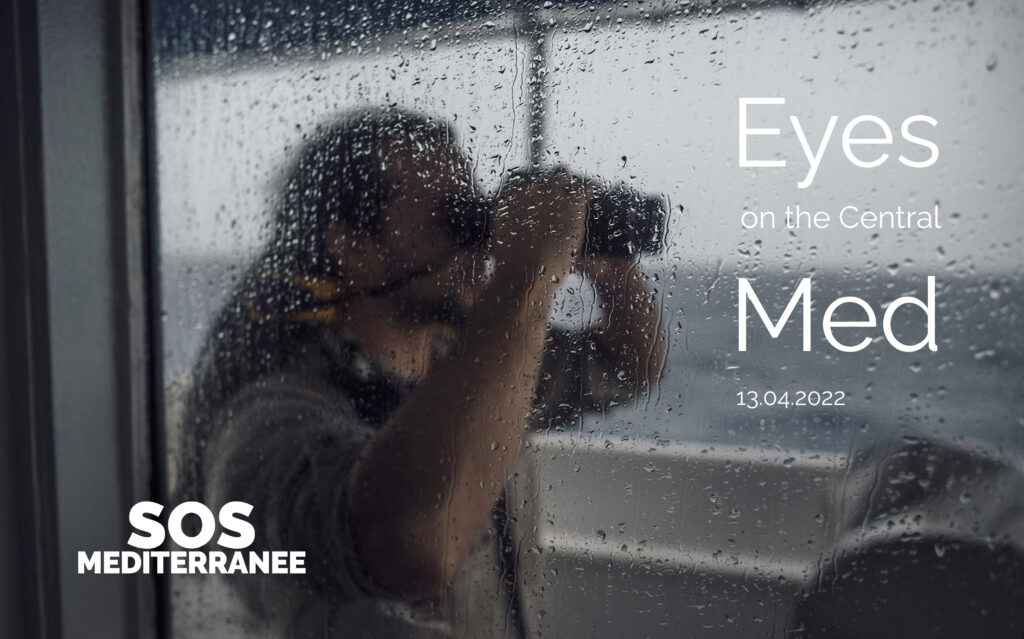 [16.03. – 12.04.22] The following publication by SOS MEDITERRANEE intends to shed light on events which unfolded in the central Mediterranean in the past four weeks. It is not intended to be exhaustive, but rather to provide a general update on maritime search-and-rescue-related matters occurring in the area we have been operating in since 2016, based on public reports by different NGOs, international organisations and the international press.

On March 23rd and 25th, the Ocean Viking rescued 160 women, children and men from two rubber boats in distress in the Libyan Search and Rescue Region (SRR). During the second operation, two people were found deceased on the deck of the overcrowded rubber boat. Due to the extreme weather conditions, the SOS MEDITERRANEE rescue team was only able to recover one body. Two days later, a pregnant woman had to be urgently medically evacuated by an Italian coastguard helicopter. On March 29th, the disembarkation of the survivors and one deceased was completed in Augusta, Sicily.

The same day, the Geo Barents of Médecins Sans Frontières rescued 113 people from a rubber boat in distress. The critical operation was conducted in difficult weather conditions. Some survivors were recovered after falling overboard. After eleven days of waiting for a Place of Safety to be designated, all could eventually disembark in Augusta, Sicily, on April 10th.

On March 28th, according to Sea-Eye, the merchant vessel Karina rescued 32 people from a wooden boat in distress in the Libyan Search and Rescue Region, facing a difficult sea state with up to four meter-waves. Survivors were transferred to the Sea-Eye 4 the following day. On March 31st, the Sea-Eye 4 rescued another 74 people from a rubber boat in distress. The 106 survivors onboard the ship disembarked in Augusta, Sicily, on April 6th.

On April 8th and 9th, the Sea-Watch 3 rescued 211 people in five operations within 24 hours. The 4th rescue was critical. When the Sea-Watch crew arrived on scene, the dinghy in distress had sunk and all shipwrecked people were in the water. 34 people could be recovered. The survivors reported that 53 others were initially on the boat in distress. On the following days, five survivors and one accompanying person had to be medically evacuated on April 10th and 11th. Four more survivors “in critical conditions” had to be urgently evacuated the following day. On April 12th, the 201 survivors remaining onboard the Sea-Watch 3 are still awaiting the designation of a Place of Safety to disembark.

According to the International Organization for Migration (IOM), 25 people perished at sea and 35 others went missing following a shipwreck off the Tunisian coast during the weekend of the 19th of March.

On April 2nd, Médecins Sans Frontières (MSF) reported a shipwreck claiming over 90 lives. Four survivors could be evacuated from imminent danger at sea by the commercial tanker Alegria 1. However, the rescue was not completed in accordance with maritime law as the survivors were forcibly returned to Libya, which cannot be considered as a Place of Safety.

On April 11th , the IOM reported another tragic event claiming 18 lives. Four bodies were retrieved, and 14 others were reported missing following the shipwreck of a wooden boat off Surman, in Libya, on April 10th. Twenty people were reported onboard the boat in distress, only two survived.

Since the beginning of the year, IOM recorded at least 475 people known to have died attempting to cross the Central Mediterranean.

On March 28th, the Independent Fact-Finding Mission established by the Human Rights Council of UN, published a follow-up report on Libya. This new report denounces a “widespread and systematic” practice of torture in detention centers in Libya.

In addition, U.N. investigators have been appointed to verify “reports of mass graves thought to contain the corpses of migrants at a trafficking hub in Libya”. Reuters press agency reports that several migrants told the U.N. Fact-Finding Mission that there were “mass graves” in the desert city of Bani Walid.

On the 30th of March, Germany announced that its military no longer will provide training to Libya’s coast guard “because of concerns about their treatment of migrants”.