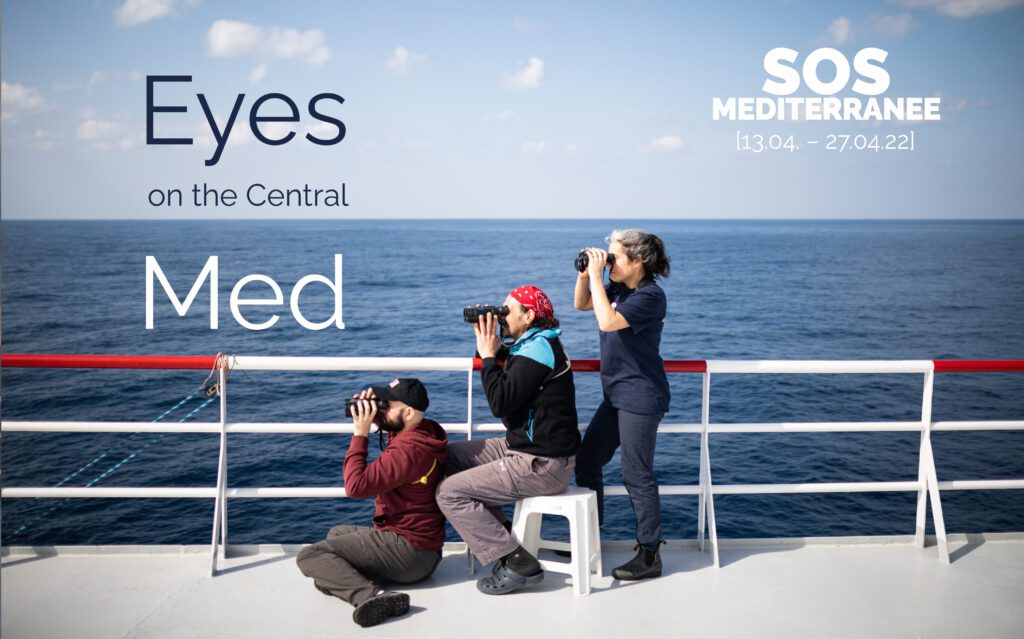 [13.04. – 27.04.22] The following publication by SOS MEDITERRANEE intends to shed light on events which unfolded in the central Mediterranean in the past two weeks. It is not intended to be exhaustive, but rather to provide a general update on maritime search-and-rescue-related matters occurring in the area we have been operating in since 2016, based on public reports by different NGOs, international organisations and the international press.

On April 23rd, the Geo Barents operated by Médecins Sans Frontières (MSF) rescued 101 people, including four young children and a pregnant woman, from a rubber boat in distress off the Libyan northwest coast.

Between April 24th and 27th, the Ocean Viking rescued 295 people from four unseaworthy and overcrowded rubber boats. On April 24, Colibiri aircraft of Pilotes Volontaires assisted in the search of the first boat in distress on which were 70 people, while the second boat with 94 people was alerted to by the civil network Alarm Phone. During the two rescues, a Libyan patrol boat approached very closely the scene of operations, causing anxiety and panic among the survivors. Among the survivors are 65 unaccompanied minors. After the second rescue, survivors reported that twelve people who embarked with them went missing. They explained that 15 people fell overboard shortly after departing. Only three managed to get back onboard. The others disappeared. Late at night on April 26, the Ocean Viking performed a difficult rescue of 72 people from a rubber boat in distress found in pitch dark and with up to 3-meter waves. This boat could be found following a distress alert sent by the civil network Alarm Phone. Few hours later, in the early morning of April 27, the SOS MEDITERRANEE rescue team spotted a fourth rubber boat in distress during a binocular watch. An additional 59 people were rescued.

On April 22nd, SOS MEDITERRANEE reiterated in a press release its urgent call for the re-establishment of a European Search and Rescue operation in the central Mediterranean while remembering those who perished in a large-scale shipwreck a year ago.

On April 23rd, the Sea-Watch 4 left the port of Vinaros, Spain, for a new lifesaving mission in the Central Mediterranean.

At least five shipwrecks claimed the lives of dozens of persons

According to IOM, on April 15th, 35 people perished in a shipwreck off the coast of Sabratha, Libya. Six bodies were recovered while 29 others remain missing. At least 53 people have been reported dead or missing during the same week.

At least 17 people are reported to have perished in the shipwrecks of four embarkations off the Tunisian coast on April 24. Their bodies were recovered from the water after 98 survivors were rescued. According to survivors, more than 120 persons had embarked on board the shipwrecked dinghies.

Autonomous arrivals: 450 people rescued close to Sicilian coasts by Italian coastguards, including an overloaded motor trawler with 383 people aboard

In south of Lampedusa, northern Mediterranean, 51 persons and a hundred others were rescued by the Italian Coast Guards into two operations on April 24th.

The same day, 47 migrants, including 10 women and a minor arrived in Lampedusa on two dinghies. They have been rescued a mile away from the coast by the patrol boats of the Guardia di Finanza.

On April 25th, 20 people who had departed from Tunisia on a dinghy landed in the port of Pantelleria, island south of Sicily. According to Ansa Sicily, it is the first arrival in Pantelleria in a long time.

According to Avvenire, during the night between 25 and 26 of April, the Italian coastguard performed the rescue of 383 people from a severely overcrowded motor trawler in front of the Sicilian coasts.

Hundreds of interceptions on land and at sea

According to IOM, a total of 247 persons were intercepted and forcibly returned to Libya during the past two weeks: 45 from April 10 to 16; and 202 during the period from April 17 to 23.

According to the Directorate for Combatting Illegal Migration (DCIM), 542 persons have been intercepted before their attempt to cross the Mediterranean by the Libyan authorities nearby a beach in Misrata.

On April 19th, according to the Libya Observer, the General Department of Coastal Security (under the Interior Ministry of Libya) received “two out of six naval boats equipped with the latest technology from Italy”. A future date was also reportedly set for “the arrival of some equipment and operational supplies necessary for the Coastal Security Department.

On April 21st, despite strong interventions from deputies’ members of the Libe Committee at the European Parliament, the European Commission confirmed its willingness to continue “to strengthen Libya’s search and rescue capacity by delivering new vessels”.