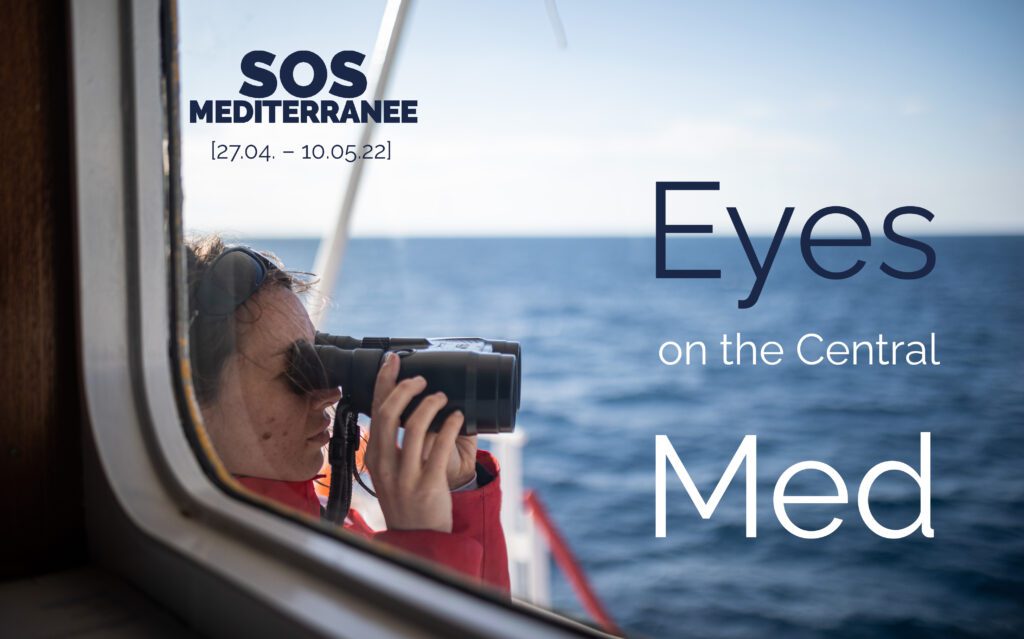 [27.04. – 10.05.22] The following publication by SOS MEDITERRANEE intends to shed light on events which unfolded in the central Mediterranean in the past two weeks. It is not intended to be exhaustive, but rather to provide a general update on maritime search-and-rescue-related matters occurring in the area we have been operating in since 2016, based on public reports by different NGOs, international organisations and the international press.

Nearly 380 women, children and men rescued from imminent death despite the continued failure of Search and Rescue (SAR) coordination

The 101 survivors rescued on April 23rd by the Geo Barents disembarked in the port of Augusta, Sicily on May 2nd. Médecins Sans Frontières’s vessel set sail  to the central Mediterranean two days later.

Among the 295 survivors rescued by Ocean Viking between April 24th and 27th, one patient had to be urgently medical evacuated on May 3rd. He was taken to a hospital with surgical capacity by the Italian coastguard. Following twelve requests for a Place of Safety  and ten days after the first rescue, the 294 remaining survivors onboard were eventually authorized to disembark in the port of Pozzallo, Sicily on May 4th. Following a two-day disembarkation process, all survivors had reached safety by May 6th.

On May 4th  and May 9th, the Sea-Watch 4 rescued respectively 57 and 88 people from two embarkations in distress at sea. 145 survivors are currently onboard the vessel.

On two occasions, during the last two weeks, a Libyan patrol vessel navigated at close distance from NGO vessels (Sea-eye 4 on May 4th  and Geo Barents on May 9th). Such a close encounter with a Libyan coastguard vessel had also occurred twice with the Ocean Viking end of April.

According to Sea-Eye and Alarm Phone, between May 6th and May 9th, a boat in distress carrying 34 people in the Maltese Search and Rescue Region (SRR) was assisted and rescued in a joint collaboration of two merchant vessels and the civil NGO ship Sea-Eye 4, without any coordination by the Maltese maritime Rescue Coordination Center (RCC).

Two lives claimed in a shipwreck off the Italian coasts

According to Associated Press, the Italian coast guard rescued 109 people  from a “double-masted sailboat” which overturned off the coast of Calabria, Italy, on May 5th. Two dead people were recovered following this event and other people might have gone missing.

Over 3,000 people died or went missing attempting to cross the Mediterranean in 2021

According to a report published by UNHCR on April 29th, more than 3,000 people died or went missing while attempting to cross the Central and Western Mediterranean and Atlantic last year to Europe in 2021.

As of 4th August 2022, the German search and rescue organization SOS Humanity  will operate the current rescue ship Sea-Watch 4 as Humanity 1 in the Mediterranean Sea.

On April 28th, the civil sea rescue organization Sea-Watch revealed having filed a lawsuit against Frontex before the General Court of the European Union (EGC) in Luxembourg in a case related to an interception by Libyan Coastguards in the Maltese Search and Rescue Region. This procedure occurs after Sea watch’s requests of information under the Freedom of Information Regulation were refused.