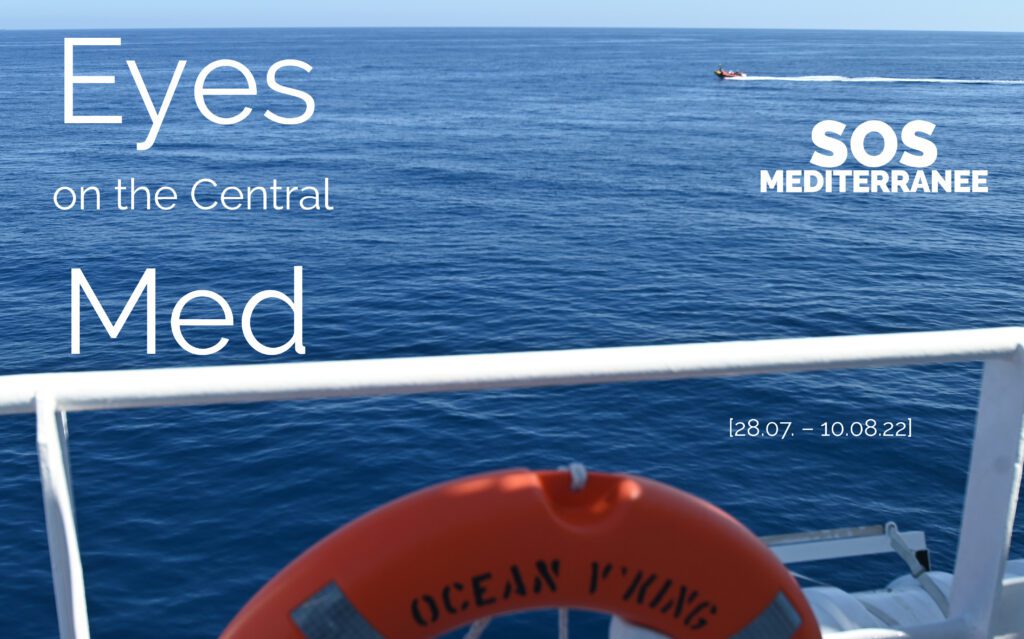 [29.07 – 10.08.22] The following publication by SOS MEDITERRANEE intends to shed light on events which unfolded in the central Mediterranean in the past two weeks. It is not intended to be exhaustive, but rather to provide a general update on maritime search-and-rescue-related matters occurring in the area we have been operating in since 2016, based on public reports by different NGOs, international organisations and the international press.

On July 28, the Italian authorities assigned Taranto, mainland Italy, as a port of disembarkation for the 438 remaining survivors onboard the Sea Watch 3, rescued in several operations between July 23 and 24. On July 30, one week after the first rescue, all the survivors could disembark in a safe place.

On July 29, following a distress alert shared by the civilian hotline Alarm Phone, the sailing boat Nadir, operated by the NGO ResQship, assisted 120 people on an adrift overcrowded boat. The crew provided first aid services to the people until the Italian coastguard rescued the people the next day. Few hours later, on July 30, the crew assisted 85 people, some were dehydrated and severely exhausted, including a pregnant woman. The rescue ended with the intervention of the Italian coastguard who brought the people to safety in Lampedusa. On August 2, in the afternoon, following a distress call relayed by Alarm Phone, the sailing boat Nadir assisted an overcrowded and unseaworthy fiberglass boat with 35 people on board until the arrival of the Italian coastguard who took over the rescue.

On July 29, the Sea-Eye 4 left the port of Messina toward the central Mediterranean and performed a first rescue in the Maltese search and rescue region on August 1. The 88 people onboard a wooden boat were assisted by the sailing vessel Nadir until the arrival of the crew of the Sea-Eye 4 who brought the people onto the ship at night. As of August 10, 10 days after the rescue, the Sea-Eye 4 has still no Place of Safety assigned for the survivors onboard.

On August 1, the Ocean Viking disembarked all the 387 survivors rescued in several operations between July 24 and July 25 in the port of Salerno, mainland Italy. The disembarkation took place 8 days after the first rescue.

On August 4, the port of Taranto was assigned to the Geo Barents, operated by Médecins Sans Frontières (MSF), to disembark the 659 survivors rescued in 11 operations between July 25 and July 28. Two days before, while waiting for the assignation of a Place of Safety, two persons tried to jump overboard in an act of desperation. One of the two persons made the attempt twice. Another person expressed suicidal ideas to the MSF team. On August 5, disembarkation started in the port of Taranto, 9 days after the first rescue. The disembarkation was complete on August 6.

On August 9, the new ship of the SAR NGO Open Arms, Open Arms Uno, left Barcelona for its first mission in the central Mediterranean.

In a context of multiplication of blockages at sea and extension of those blockages, three SAR NGOs – MSF, Sea-Watch and SOS MEDITERRANEE – called together for “the provision of European state-led search and rescue maritime assets in the central Mediterranean to prevent more deaths” on August 3. At time of publishing the press release, the Geo Barents was still blocked in international waters with 659 survivors onboard, waiting for a Place of Safety, and the Sea-Watch 3 and the Ocean Viking had to wait long period at sea with respectively 438 and 387 people onboard.

According to the journalist Sergio Scandura, a boat with 500 people was rescued by the Italian coastguard on August 6. Three Italian vessels were used to complete the operation. Survivors were then disembarked in different ports. Overall, according to the Italian government, over 13,000 people arrived in Italy by the sea in July 2022.

On August 1, the European Court of Justice (ECJ) issued a ruling on the case related to Sea-Watch 3 and Sea-Watch 4 detention in Porto Empedocle and Palermo, respectively, following port state control (PSC) inspections in 2020. The ECJ concluded that national maritime authorities, while having the right to inspect ships, should not use PSCs to detain a ship without demonstrating a threat to “safety, health or the environment”. It highlights the primacy of the duty to render assistance at sea by considering that survivors “must not be taken into account when verifying whether the rules on safety at sea have been complied with. The number of persons on board, even if greater than that which is authorized, cannot therefore, in itself, constitute a ground for a control.” The Court added that a port authority cannot demand a certification that does not exist under the Flag state requirements.