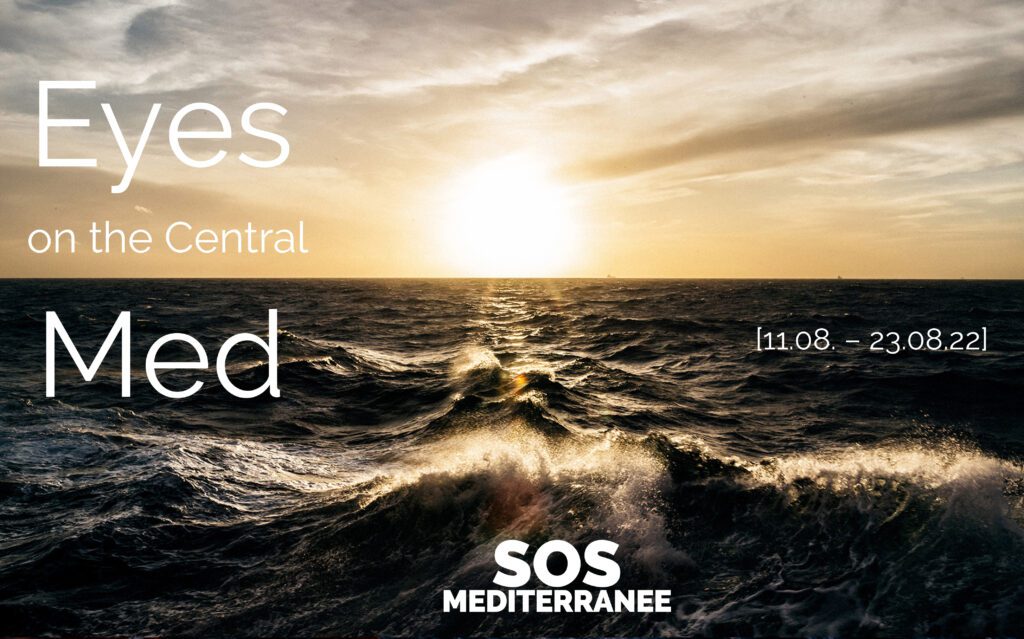 [11.08 – 23.08.22] The following publication by SOS MEDITERRANEE intends to shed light on events which unfolded in the central Mediterranean in the past two weeks. It is not intended to be exhaustive, but rather to provide a general update on maritime search-and-rescue-related matters occurring in the area we have been operating in since 2016, based on public reports by different NGOs, international organisations and the international press.

On August 11, an overcrowded boat carrying about forty people capsized off the coast of Lampedusa, while a rescue operation was underway by the sailing vessel Astral of the Spanish NGO Open Arms. According to the NGO and the Italian Coast Guard, which arrived on site when the boat was already capsized, there would be no casualties. The survivors were transferred on the Italian Coast Guard patrol vessel and disembarked in Lampedusa.

The same day, the sailing vessel Nadir of the German NGO ResQship assisted 121 people found on an overcrowded wooden boat in distress, exposed to rough weather conditions with one-meter waves. The Nadir crew distributed lifejackets and escorted the boat until all people in distress were eventually rescued by Italian Coast Guards and disembarked in Lampedusa.

On August 12, after an extremely long period of blockage at sea, the Sea-Eye 4 operated by the German NGO Sea-Eye was eventually authorized to disembark the 87 survivors rescued on July 29 in a safe port. The survivors spent 14 days at sea, eleven of which were aboard the NGO ship.

Between August 17 and 20, Colibri aircraft of Pilotes Volontaires spotted 20 empty boats and reported two boats in distress who were rescued by Italian and Tunisian Coast Guards.

On August 21, while sailing towards the south of the central Mediterranean, the Geo Barents ship operated by MSF (Doctors without Borders) was instructed by the Italian Coastguard to search and rescue a boat in distress. Onboard were 106 survivors, including 26 women and 42 minors, who had departed from Turkey. The Geo Barents has been assigned Taranto, Sicily, as Place of Safety to disembark the survivors the next day.

On August 16, approximately 500 people were rescued by Italian Coastguards from a large wooden boat who had reportedly departed from Libya according to Italian journalist Sergio Scandura of Radio Radicale. Survivors were disembarked in two different Italian ports: Messina and Roccella Ionica.

On August 21, Sergio Scandura, Italian journalist of Radio Radicale, reported the arrival of a large wooden boat carrying approximately 600 people, including women and children; the youngest survivor being less than 2 months old. The boat is reported to have left from Libya. At least, six survivors were taken to a hospital.

One shipwreck without reported casualties

Tunisian defense ministry spokesperson Mohamed Zekri told the French news agency Agence France Presse (AFP) that “the Tunisian authorities had helped rescue 42 people in distress off the Kerkennah islands off central Tunisia”, after the boat had departed from Libya. According to AFP, their boat sank, and survivors took refuge on a nearby offshore oil platforms.

These past two weeks, 878 people were intercepted and forcibly returned to Libya by Libyan maritime authorities. Between 7 – 13 August, 738 people were reported intercepted by the International Organisation for Migration (IOM) and 140 people in the period of 14 – 20 August.

According to Frontex, the European border and Coast Guard Agency contributed to the interceptions of 794 persons in 17 operations in the Central Mediterranean.

On August 15, Tunisian authorities reported having evacuated 657 people from danger at sea in 46 separate incidents between August 12 and 15. Last week, over 250 people were found in distress by Tunisian maritime authorities.