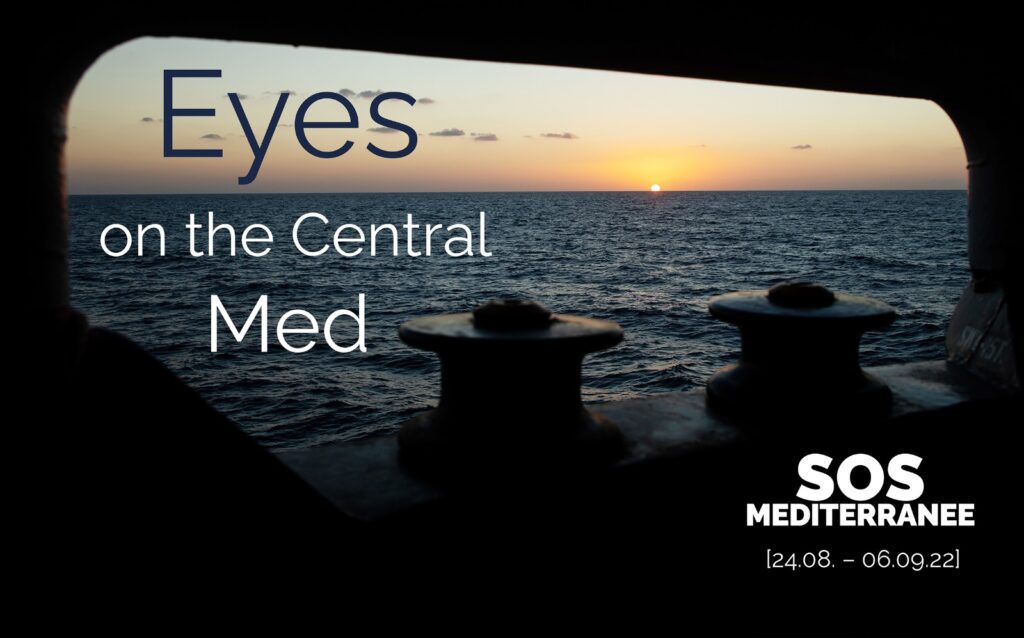 [24.08 – 06.09.22] The following publication by SOS MEDITERRANEE intends to shed light on events which unfolded in the central Mediterranean in the past two weeks. It is not intended to be exhaustive, but rather to provide a general update on maritime search-and-rescue-related matters occurring in the area we have been operating in since 2016, based on public reports by different NGOs, international organisations and the international press.

7 days: countless searches and rescues in an almost total lack of coordination by maritime authorities

On August 24, a large wooden boat with approximately 500 people arrived autonomously off Catanzaro Lido, in Calabria, while another 645 people were rescued from two boats in distress by the Italian Coast Guard. The survivors were disembarked in two different ports: 395 people were brought to Pozzallo, and the 250 others landed in Porto Empedocle. The same day, Geo Barents disembarked 106 survivors in the port of Taranto, Italy, after being instructed by Italian maritime authorities to evacuate them from a boat in distress on August 21, while the Ocean Viking spotted four empty boats in international waters off the Libyan coast, including one found without engine, close to a distress position reported by the civil network Alarm Phone.

Between August 25 and 27, Ocean Viking rescued 466 people from ten boats in distress. Two were found in international waters off the coast of Libya, the eight others were found in the Maltese Search and Rescue Region. Four of the unseaworthy and overcrowded boats in distress were spotted via binoculars from the bridge of the Ocean Viking. The distress alerts of the six other boats were relayed by civil NGOs such as the civil network Alarm Phone, the aircrafts of the NGOs Pilotes Volontaires and Sea-Watch, and the sailing vessels of the NGOs Open Arms and Resqship.  None of the rescues were coordinated by maritime authorities. Among the survivors were several heavily pregnant women and 81 minors, most of whom were unaccompanied. Due to a prolonged period of blockage in the designation of a Place of safety, three pregnant women had to be urgently medically evacuated with their relatives in two different operations, one via an Italian coastguard patrol vessel, and the second via an Italian coastguard helicopter.

In the meantime, between August 26 and 27, the sailing vessels Astral and Nadir rescued and assisted four boats in distress. On August 26, Nadir rescued 59 people from a rubber boat in distress while Astral assisted a wooden boat with 20 people onboard, including a woman and a baby and another boat with 70 people who had been adrift for 20 hours, found 25 NM from Lampedusa. The next day, the Astral assisted a small wooden boat carrying 13 dehydrated persons while Nadir  had to urgently medically evacuate 8 survivors. They were transhipped on an Italian Coastguard vessel. Later that day, the Nadir was designated a Place of Safety to disembark the remaining survivors onboard and the disembarkation occurred during the night in Lampedusa.

In the meantime, 1,000 people survived the sea crossing without finding support and arrived in Lampedusa. In addition to the arrivals of over 30 boats, two hundred people embarked on eleven different boats landed on the Sicilian Island in less than an hour according to an Italian local media.

Between August 27 and August 30, the Geo Barents operated by MSF (Doctors without Borders) rescued 267 people from seven boats in distress. Six of them were rescued within approximately 70 hours. The last one was carrying 32 people who had departed from Libya 3 days before. On September 6, the survivors were assigned Taranto, Italy, as place of safety to disembark.

On August 27, the 101 people rescued by Open Arms Uno over a week ago finally disembarked in Messina, Sicily.

On September 2, the Sea-Eye 4 rescued 76 people from a double-deck wooden boat previously spotted and assisted by Nadir. Without solution for their disembarkation, one of the survivors had to be medically evacuated via helicopter on September 6. In the meantime, the Sea-Eye crew has been searching for several reported distress cases.

On September 3, Nadir assisted a large wooden boat with approximately 300 people onboard in international waters under the responsibility of Italian maritime authorities. The survivors were then rescued by the Italian Coast Guard.

In the night between September 5 and 6, the Rise Above rescued 54 people from a wooden boat in distress. The survivors were transferred the next day on the Sea-Eye 4.

A boat capsized off Libya’s coast, claiming the lives of 21 people, according to six survivors of the shipwreck who were intercepted by Libyan authorities. Two bodies were retrieved, and 19 others are reported missing and presumed dead. According to the International Organisation of Migration (IOM), this tragedy occurred on August 27.

Two days later, a search for a wreck and bodies of possible victims of a shipwreck started off the southern coast of Sardinia. The tragedy would have taken place in the previous days. The recovery of two corpses off the Isola Rossa in Capo Teulada had confirmed the hypothesis of a shipwreck. Two investigation files were opened by the Cagliari prosecutor’s office. By August 31st, five bodies of deceased persons had been recovered by Italian authorities. All were transported to the canal port of Cagliari awaiting transfer to the cemetery of San Michele.

Since the beginning of the year, over 1,000 people are known to have died or gone missing in the central Mediterranean.

Departures from Tunisian coasts also continued these past weeks and this summer. More than 2,000 Tunisian minors made the perilous Mediterranean crossing from the North African country to Italy so far this year, Tunisian Forum for Economic and Social Rights group (FTDES) has said. They were among a total of 10,139 Tunisian to have migrated to Italy via the sea since the start of 2022, according to a statement of the human rights group issued on August 24. The next day, the Tunisian National Guard spokesman Houssemeddine Jebabli announced that Tunisian authorities blocked “1,509 attempts to reach Europe illegally” via the sea between the start of the year and August 23 with a total of 16,000 people (7,000 Tunisians and and 8,700 foreigners).

On September 3, the Italian NGO Emergency announced the acquisition of a ship, named Life support, which will be dedicated to search and rescue operations in the central Mediterranean. The 168 feet length and 39 feet width is known as an offshore vessel, a ship equipped for special operations. Her first mission is planned for autumn 2022.