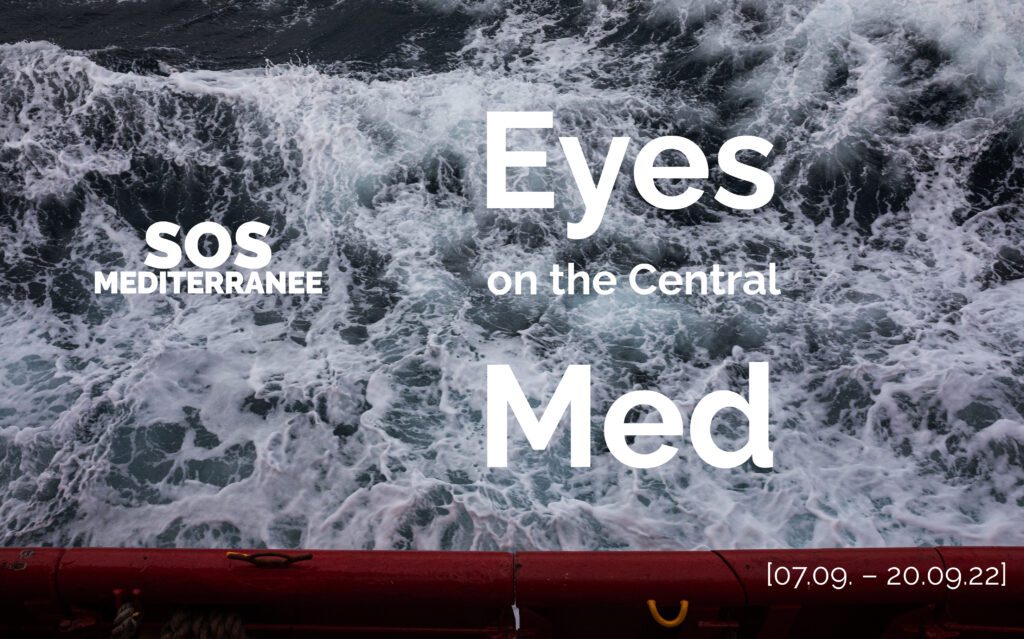 [07.09 – 20.09.22] The following publication by SOS MEDITERRANEE intends to shed light on events which unfolded in the central Mediterranean in the past two weeks. It is not intended to be exhaustive, but rather to provide a general update on maritime search-and-rescue-related matters occurring in the area we have been operating in since 2016, based on public reports by different NGOs, international organisations and the international press.

Between September 6 and 14, the NGO vessel Humanity 1, former Sea-Watch 4, operated by SOS Humanity contucted her first rescue operations: 415 people were rescued from four boats in distress. Almost half of the survivors are under 18. Two of the distress alerts were reported by the civil network Alarm Phone. Among the survivors, 111 people were rescued from an overcrowded rubber boat, in coordination with the sailing vessel Nadir, in international waters off the coast of Libya. The last boat had departed from Lebanon a week before being rescued with 207 people onboard. On September 18, the three youngest babies on board had to be medically evacuated with their relatives. The next day, two weeks after the first rescue, survivors were assigned Taranto, Italy to disembark.

In the meantime, between September 8 and September 11, the Sea-Watch 3 performed ten rescues. On September 16, after ten requests for a Place of Safety, the ship declares “state of necessity”  warning that their supplies are running out and that survivors and crew are exhausted. Two days later, the 428 men, women and children including a two-week-old-baby finally disembarked in Reggio Calabria, Italy.

Between September 2 and September 6, Sea Eye 4 rescued two boats in distress. Thirteen days after the first rescue, the 129 people on board the Sea Eye 4 disembarked in Taranto, Italy.

The NGO vessel Open Arms Uno rescued four boats in distress between September 15 and September 18. On September 17 at night, the crew rescued 294 people, including 43 women and 60 children who had departed four days earlier. The next day, after more than 24 hour-search, they rescued 59 people  who had taken refuge on an oil rig and also recovered a deceased person.

On September 20, Resqhip’s Nadir found 30 people on an overcrowded boat in distress. For safety, nine women and one child were taken on board the sailing vessel. The distress boat was then towed with the twenty occupants outside Lampedusa and recovered by the Italian Coast Guard.

At least 20 lives claimed in a shipwreck, 7 others die of thirst after ten days lost at sea

On September 6, a boat sank off the central eastern coast of Tunisia. Twelve people died and eight are reported missing from a group of 37 people who left from the southern region of Sfax towards Italy.

Six people died of thirst while lost at sea for ten days. The victims are two children of 1 and 2, a twelve-year-old and three women including a mother of two children. They had left from Turkey on August 30 with 26 other people. The survivors were eventually rescued by a merchant ship and then transferred onto an Italian Coast Guard patrol vessel that disembarked  survivors to Pozzallo, Italy.

September 7, a four-year girl perished in international waters off the coast of Malta. She had left Lebanon with her mother and sister on a boat with 58 other people in late August. On September 4, after ten days at sea, left with no food or water, they sent distress signals. The Maltese armed forces (AFM), aware of the case, didn’t coordinate the rescue. Three days later, on September 7, a freighter rescued them and a Greek navy helicopter evacuated the four-year girl to a hospital where she was pronounced dead.

Following these tragedies, on September 12, the UNHCR called for “an urgent need to restore a timely and efficient state-led search and rescue mechanism in the Mediterranean” This year, more than 1,300 people are known to have died or gone missing in the Mediterranean Sea, 80% of whom perished in the central Mediterranean. In the meantime, 16, 506 people were forcibly returned to Libya, which cannot be considered a Place of Safety.