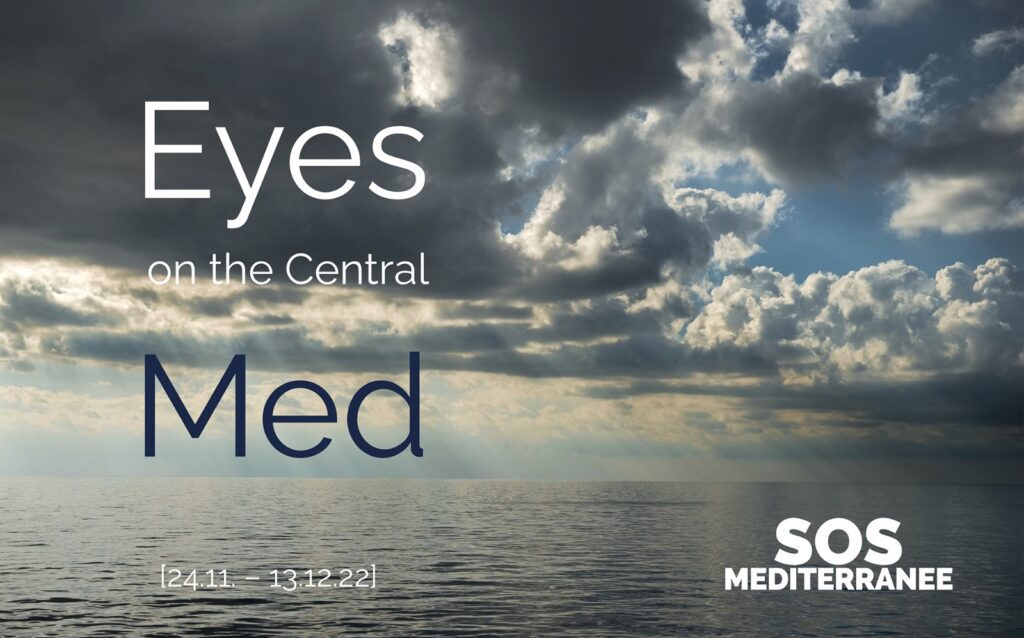 [24.11 – 13.12.22] The following publication by SOS MEDITERRANEE intends to shed light on events which unfolded in the central Mediterranean in the past weeks. It is not intended to be exhaustive, but rather to provide a general update on maritime search-and-rescue-related matters occurring in the area we have been operating in since 2016, based on public reports by different NGOs, international organisations and the international press.

Between December 4 and December 6 Médecins Sans Frontières vessel, Geo Barents rescued 254 women, men and children in three separate operations. On December 7, a woman gave birth on board and then was evacuated  with her baby along her three other children in Lampedusa. Another 9-month-pregnant woman was also evacuated the same day in Malta.  Two days later, a 14-year-old boy traveling alone was evacuated to Sicily. The 248 remaining survivors all disembarked in Salerno on December 11.

In the meantime, between December 4 and December 6, 261 women, men and children were evacuated by the vessel Humanity 1 of the NGO SOS Humanity, in three operations operated in collaboration with the ship Louise Michel. On December 11, all survivors disembarked in Bari, Italy. On December 6, Louise Michel evacuated 33 people from a small wooden boat. Two days later, they disembarked on the Sicilian Island of Lampedusa.

Following these disembarkations in Italy, Matteo Piantedosi, the Italian interior minister, declared that the decision was made because “the approaching bad weather would soon expose the people on board at risk”.On December 12, the head of the Italian government, Giorgia Meloni announced that “new regulations” regarding this topic will be shared the following week.

The French newspaper “Le Monde” published on November 24 an investigation identifying the origin of seven aerial images published by the Libyan Coast Guard on their Facebook pages. According to the French media outlet, they were taken by Frontex surveillance equipment and highlight how “the activities of the European agency facilitate illegal interceptions by Libyans in the Mediterranean whereas Frontex has always maintained that it does not collaborate with the Libyan coastguard.”

On December 12, the NGO Human Rights Watch and agency Border Forensics released a multimedia research feature demonstrating that “Frontex aerial surveillance enables abuses” by providing aerial surveillance information to Libyan authorities for the purpose of intercepting people escaping abuse in Libya, knowing that upon capture they will be returned to Libya.

No interceptions and forced returns to Libya were recorded by International Organisation Migration (IOM) between November 20 and 26. However, in the period of  November 27 to December 10, 1,712 men and women were intercepted by Libyan maritime authorities and forcibly returned to Libyan shores.

On November 29, a member of the Tunisian Parliament, shared a video of a violent interception in the Central Mediterranean by the Tunisian coastguards. The same day, a large wooden boat with 500 people was intercepted off Tobruk in eastern Libya. According to the International Organisation for Migration, the number of departures from the eastern coast of Libya have been more frequent since the beginning of the summer.

On November 29, 2022, high-ranking officials of EU Member States and EU authorities, including the EU’s former foreign policy chief Federica Mogherini, Italy’s current and former interior ministers, the current and former prime ministers of Malta, and the former executive director of European border agency Frontex Fabrice Leggeri have been named as the subjects of a Communication to the international criminal court (ICC)  by the German NGO the European Centre for Constitutional and Human Rights (ECCHR) calling for the opening of an investigation. The EU agency and Member State officials are accused of committing several “crimes against humanity in the form of the severe deprivation of physical liberty” between 2018 and 2021 by developing and implementing policies that participate to the interception of boats in the Mediterranean Sea and forced returns of people into detention in Libya.

On November 25, the Council of the European Union approved the action plan presented by the EU Commission for the Central Mediterranean proposing a series of 20 measures with the stated objectives to: “reduce irregular and unsafe migration, provide solutions to the emerging challenges in the area of search and rescue and reinforce solidarity balanced against responsibility between Member States.” On December 1st, the NGO Human Right Watch described these propositions as “another missed opportunity for the European Union to reset its myopic and harmful policies on this crucial migration route.”

On November 23, IOM released an analysis of Missing Migrants Project. Since the project began documenting deaths in 2014, more than 50,000 people have lost their lives during migratory movements. More than half of these deaths (25,104) occurred in the Mediterranean Sea, 80% of which were recorded in the central Mediterranean route. However, this grim record is most likely highly underestimated due to the unknown number of shipwrecks without witness.