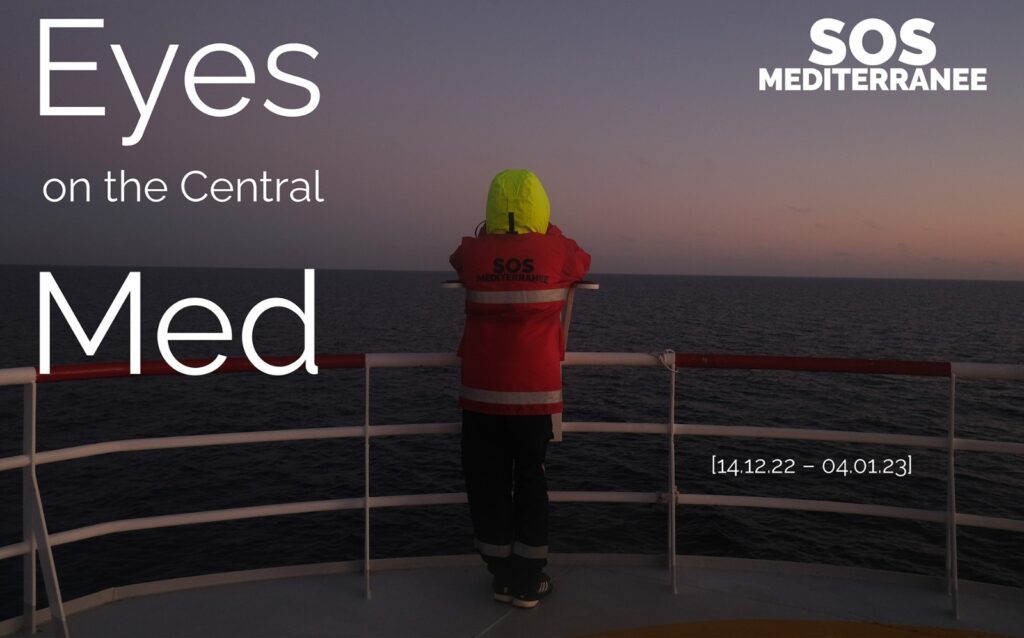 [14.12.22 – 04.01.23] The following publication by SOS MEDITERRANEE intends to shed light on events which unfolded in the central Mediterranean in the past weeks. It is not intended to be exhaustive, but rather to provide a general update on maritime search-and-rescue-related matters occurring in the area we have been operating in since 2016, based on public reports by different NGOs, international organisations and the international press

On December 16, the Sea-Eye 4 conducted a joint rescue operation of 63 people with Mission Lifeline’s cooperation. The next day, Sea-Eye 4 was instructed by Italian maritime authorities to disembark the 63 survivors immediately in Livorno while being involved in the search of another distress case. The boat reported in distress was eventually found and rescued in the Maltese Search and Rescue Region, in the night between December 18 and December 19: 45 people were rescued. Following a four-day long navigation, on December 23, the 108 survivors disembarked.

On December 17, the Rise Above, operated by Mission Lifeline, rescued 27 people, among whom nine women and two babies. Shortly after the rescue, they received the instructions to disembark the 27 survivors in Gioia Tauro Port. The survivors disembarked in the closed military port on December 19.

The new Search and Rescue asset called Life Support of the NGO Emergency conducted her first rescue operation on December 18, providing assistance to 72 people (among them one pregnant women, two children under the age of two and 24 unaccompanied minors) in the Libyan Search and Rescue Region. Shortly after the rescue, the vessel was assigned Livorno to disembark the survivors. The same day, Open Arm’s sailing vessel Astral stabilized a wooden boat in distress with 160 people onboard.

On December 21, Italian journalist Sergio Scandura of Radio Radicale reported that 280 people were rescued by the Italian coast guards off Licata.

On the same day, the Rise Above conducted the rescue of 80 people. On December 22, they reported that after being instructed to disembark the survivors in Roccella Ionica, they were then instructed to sail towards Taranto, 150 nautical miles further away. Survivors were able to disembark on December 24, after several medical evacuations.

In the night of December 26 to December 27, the Ocean Viking rescued 113 women, children and men, including 34 unaccompanied minors, in the Maltese Search and Rescue Region. Shortly after, Italian maritime authorities provided the Ocean Viking with a distant Place of Safety (La Spezia), urging the ship to proceed to the location. Few hours later, they reassigned an even further port: Ravenna, 900 nautical miles away and up to four days of navigation. The survivors disembarked on December 31 in Ravenna.

The year 2023 started with two rescue operations conducted by the Geo Barents, following instructions provided by the Italian Maritime Rescue Coordination Centre. A total of 41 people, were first recovered on January 1, followed by another 44, transshipped from a merchant vessel on January 2. Later that day, Geo Barents was instructed to head to Taranto to disembark survivors. All 85 survivors disembarked on January 4, following a two-day navigation to reach land.

On January 2, the Italian journalist Sergio Scandura reported a large rescue operation conducted by Italian coast guards during which 546 people rescued on a trawler were disembarked in Catania, Messina and Roccella Ionica.

On December 15, Tunisian authorities reported to Alarm Phone that at least four people died when their boat sank near Sfax. Authorities claim that 26 of the 30 people on board were rescued.

A few days later, the Italian press agency ANSA reported that the Tunisian National Guard denied accusations made by 50 Tunisian and international associations and NGOs, claiming that “there is increasingly clear evidence that the Tunisian Coast Guard is directly involved in dangerous maneuvers, costing the lives of numerous migrants”.

In total, more than 18,000 people reached the Italian coast from Tunisia in 2022, according to the Tunisian Forum for Economic and Social Rights (FTDES). 580 people are considered missing since their crossing.

In total, between 11 and 31 December 2022, 2,130 men and women were intercepted by Libyan maritime authorities and forcibly returned to Libya according to the International Organisation Migration (IOM): 1,042 between 11 to 17 December 2022; 1,088 between 25 to 31 December. Meanwhile, the country is still in the grip of chaos, with heavy fighting erupting in the coastal city of  Sabratha on December 16.

On December 12, EU launched two “Team Europe Initiatives” focused on the Atlantic/Western Mediterranean and the Central Mediterranean migratory routes. According to the European Commission, the initiatives “will contribute to implementing the external dimension of the New Pact on Migration and Asylum and combine Member States’ activities with cooperation and coordination at the EU level through a whole-of-route approach.”

On January 2, a new decree on “urgent provisions for the management of migratory flows” was signed by the Italian Presidency. 20 SAR NGO’s published a statement on January 5 to express “gravest concerns regarding the latest attempt by a European government to obstruct assistance to people in distress at sea.”

Decisive steps were taken on December 19, regarding the trial of four crew members of the Iuventa ship, with both the Italian Ministry of the Interior as well as the Prime Minister’s office  requesting to be admitted as joint plaintiffs in the trial.

Five years after the start of investigations, the court of Trapani in Sicily launched the trial, in May 2022. The four crew members are accused of “aiding and abetting illegal immigration” over rescues carried out between September 2016 and October 2017 and face up to 20 years in prison if convicted.