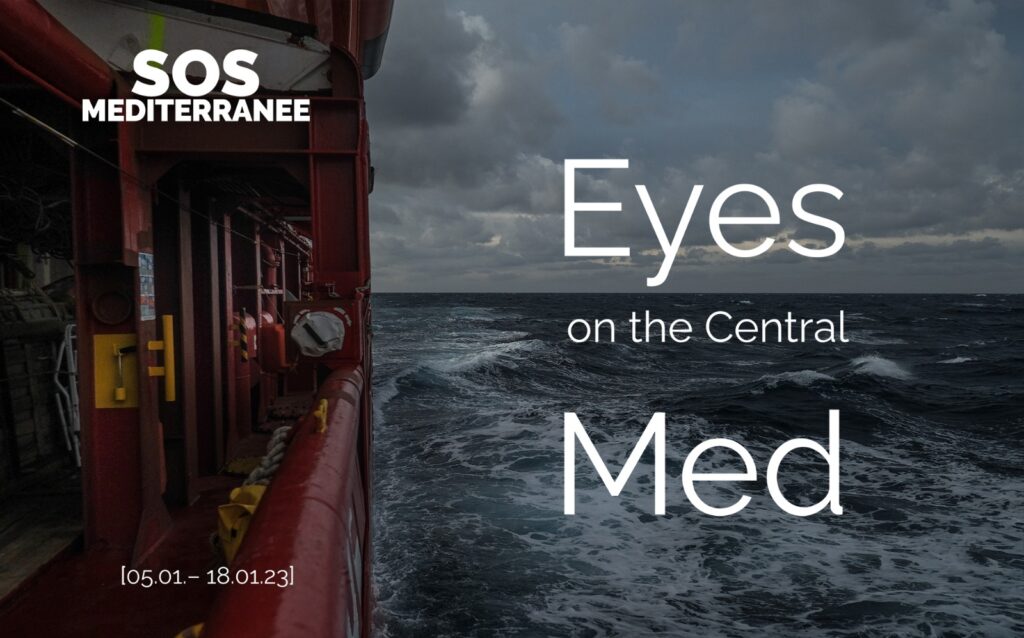 [05.01.23 – 18.01.23] The following publication by SOS MEDITERRANEE intends to shed light on events which unfolded in the central Mediterranean in the past weeks. It is not intended to be exhaustive, but rather to provide a general update on maritime search-and-rescue-related matters occurring in the area we have been operating in since 2016, based on public reports by different NGOs, international organisations and the international press.

In 2023, few civil Search and Rescue capacities in the central Mediterranean despite unabated attempts to flee Libya via the sea

On January 7th, Ocean Viking rescued 37 people from an overcrowded small rubber boat in international waters off Libya. The unseaworthy boat with people on the sponsons was spotted via binoculars at dawn. Shortly after, Italian maritime authorities provided the Ocean Viking with a Place of Safety: Ancona, Italy, to disembark the survivors. The distant port was 1,575 km away from the area of operations, which took four  days of navigation to reach.

On the same day, the Geo Barents, operated by Médecins Sans Frontières (MSF) rescued 73 people, including 16 unaccompanied minors, from an unseaworthy and overcrowded rubber boat located in international waters off Libya. Three hours later, the vessel was also assigned the distant port of Ancona as Place of Safety by Italian Maritime authorities.

As the weather forecast predicted a storm on the way to the port of Ancona, the two NGO vessels asked Italian maritime authorities for a closer Place of Safety to disembark the rescued people. On January 8, the request was denied to both Geo Barents and Ocean Viking.

On January 9, according to the Italian journalist Sergio Scandura of Radio Radicale, 89 people rescued by the Italian coast guards were disembarked in Augusta.

The next day, after going through extreme weather conditions, with 40 knots winds and up to 6-meter waves, the 37 survivors eventually disembarked in Ancona, followed by the 73 survivors onboard Geo Barents, on January 12.

Civil aerial assets have also a vital role in  Search and Rescue operations in the central Mediterranean: between December 2022 and January 2023, the aerial NGO Pilotes Volontaires located 92 boats, with 885 people on board, during 19 flights.

On January 6, a shipwreck off Lampedusa reported by the Italian press agency Ansa, claimed three lives. Among the bodies recovered, a one-year-old child. Another infant was also resuscitated, and 29 other people were rescued by Italian coast guards. Since the beginning of the year, 25 lives have been lost in the central Mediterranean, totalizing 20,247 since 2014 (Missing Migrants’ IOM project).

In year 2022, a total of 24,684 women, men and children were intercepted by Libyan authorities and returned to Libya, according to International Organisation Migration (IOM). In 2021, they were 32,425.

On January 1, Kidane Zekarias Habtemariam accused of being “the world’s most wanted” people smuggler and subject of two Interpol red notices by Ethiopia and the Netherlands, was arrested in Sudan, in coordination with UAE authorities.

Kidane was sentenced in absentia to life in prison by an Ethiopian court in June 2021 after being convicted of “starving and torturing  African refugees and migrants who were headed for Europe in warehouses in Libya.”

After 20 SAR NGO’s statement was published on January 5 to express “gravest concerns” following new security decree signed by the Italian presidency on January 2 and currently in process of converting into law, a hearing was held in Italian chamber of deputies on January 16, with representatives from numerous civil organizations.