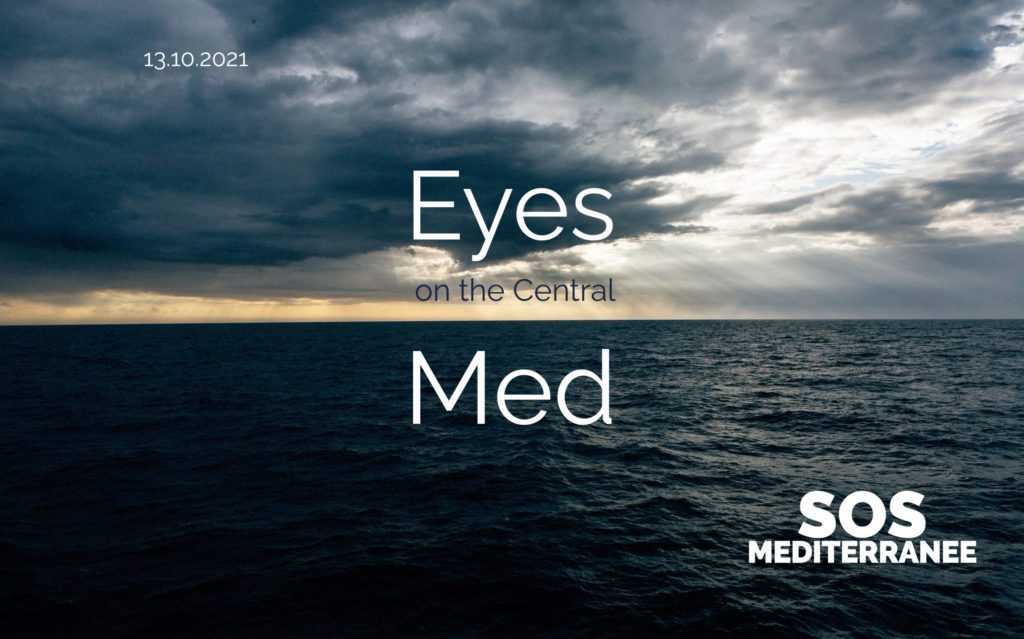 [29. 09. – 12.10.21] The following publication by SOS MEDITERRANEE intends to shed light on events which unfolded in the central Mediterranean in the past two weeks. It is not intended to be exhaustive, but rather to provide a general update on maritime search-and-rescue-related matters occurring in the area we have been operating in since 2016, based on public reports by different NGOs, international organisations and the international press.

Several NGO vessels back in the central Mediterranean, some after months of administrative detention

On October 2, the Seabird aircraft spotted a boat in distress with about 70 people onboard and informed the nearby merchant vessel Asso29. The captain of the vessel reportedly denied it was a distress case before rescuing the people after several hours. On October 4, the Asso29 safely disembarked the rescued people in Lampedusa.

On October 6, the Resqship sailing boat Nadir rescued 39 people in distress in the Maltese Search and Rescue Region. The survivors were disembarked in Lampedusa in the afternoon.

On October 7, the Proactiva Open Arms ship Open Arms set sail towards the central Mediterranean for the first time in six months after administrative detention and a subsequent shipyard. On October 10, the Sea-Watch ship Sea-Watch 3 also set sail towards the central Mediterranean. The ship was released from administrative detention in July and underwent maintenance in Burriana, Spain until then.

On October 10, the People Saving People ship ResQPeople rescued 59 people in distress, including 6 women and 17 minors.

Forced returns and shipwrecks continue to be reported at sea

The past two weeks have been chaotic in the central Mediterranean as shipwrecks have been documented and potential invisible shipwrecks occurred: dead bodies washed ashore or were retrieved from the sea. Meanwhile, the number of forced returns keep skyrocketing.

On October 3, 500 people were forcibly returned by Libyan coastguard in a single day. On October 6, at least 17 bodies were washed ashore in western Libya according to the Libyan Red Crescent. The drama goes on, with the UNHCR reporting the recovery of 15 bodies and 177 survivors on October 11, from two patrol vessels forcibly returning to Libya people that were trying to flee from Zwara and Alkhoms the night before.

Alongside the tragedies at sea, on October 1 the Libyan authorities conducted raids on houses and temporary accommodations used by people on the move in Gargaresh area resulting in “loss of life, casualties and mass detention” according to the International Organization for Migration (IOM). 5,152 people are affected and have a range of immediate needs. These people have been transferred to overcrowded State-managed detention centres.

The UNCHR stated the raids involved the demolition of shelters that widespread panic and fear among people in the capital. “Many, including unaccompanied children and young mothers, who had lost their shelters and are now homeless have approached UNHCR staff and partners at the Community Day Centre (CDC) for urgent assistance.” However, escalating tensions made the UNHCR temporarily suspend regular services at the centre.

In response, the UN Support Mission in Libya (UNSMIL) reiterated their “call on the Libyan authorities to end and prevent arbitrary arrest and detention, and immediately release those most vulnerable, particularly women and children”.

On October 4, an independent fact-finding mission led by the UN Human Rights Council released a report stating that war crimes and crimes against humanity may have been committed in Libya since 2016: “Violence in Libyan prisons is committed on such a scale and with such a level of organization that it may also potentially amount to crimes against humanity […] Migrants, asylum-seekers and refugees are subjected to a litany of abuses at sea, in detention centres and at the hands of traffickers.”

On October 9, six people were killed and at least 24 others injured at the Mabani detention centre, in which 4,187 people were forcibly transferred after the October 1’s raids, reported IOM. Armed guards shooted at people following attempted escapes. The IOM condemned this attack “The use of excessive force and violence often resulting in death is a regular occurrence in Libyan detention centres,” stated IOM Libya Chief of Mission Federico Soda, “Some of our staff who witnessed this incident describe injured migrants in a pool of blood lying on the ground. We are devastated by this tragic loss of life.”

According to IOM, there are nearly 10,000 men, women and children detained in grim conditions in official facilities which have limited and often restricted access for humanitarian workers.

Despite these recent events, the European Commission is to deliver new ‘P150’ class patrol boats to the Libyan coastguard, said the EU Observer.

Between October 2 and October 3, 400 to 600 people reportedly arrived autonomously in Lampedusa in up to 18 different small boats. Some of them arrived independently while others were rescued near the coast by the Italian coastguard and other ships.

On October 5, the Sea-Watch aircraft Seabird spotted a boat with around 60 people onboard in the Maltese Search and Rescue Zone region subsequently rescued by the Italian coastguard. More arrivals have also been recently reported in Lampedusa.