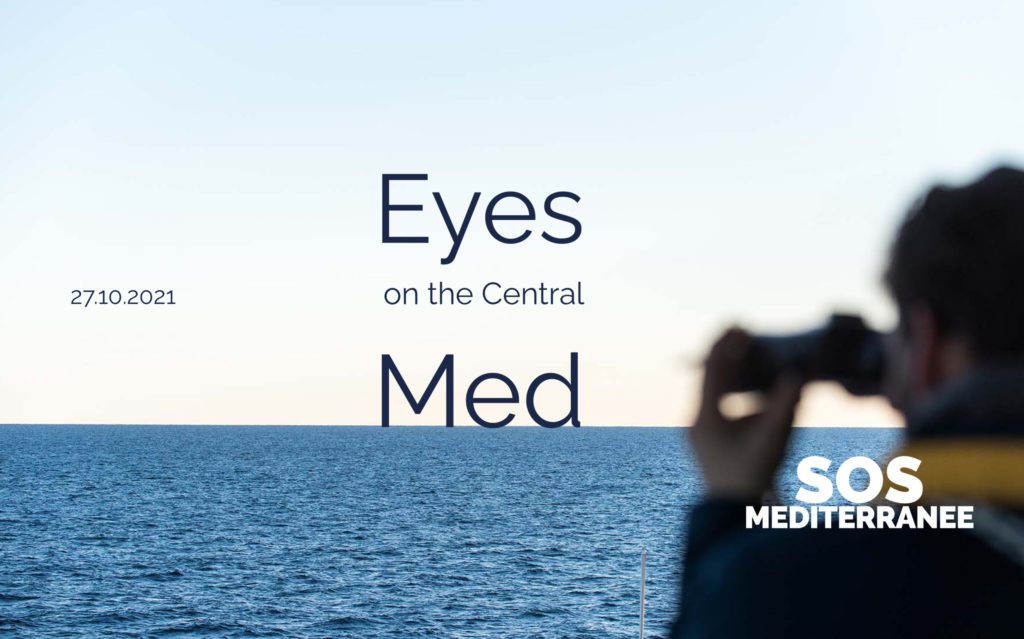 [13.10. – 27.10.21] The following publication by SOS MEDITERRANEE intends to shed light on events which unfolded in the central Mediterranean in the past two weeks. It is not intended to be exhaustive, but rather to provide a general update on maritime search-and-rescue-related matters occurring in the area we have been operating in since 2016, based on public reports by different NGOs, international organisations and the international press.

Over the course of one week, civil search and rescue organisations rescued more than 850 people from distress at sea in the Central Mediterranean.

The crew on Sea Watch 3 rescued 412 people in seven rescues. After three medical evacuations and several days of waiting, Pozzallo, Sicily, was assigned as a port for the disembarkation of survivors from Sea Watch 3.

In the early hours of October 18th, sailing Vessel Nadir of NGO Resqship took on board 34 people from two unseaworthy boats in distress in the Maltese search and rescue region. The crew waited for assistance for almost two days before being instructed to disembark the survivors, among them 16 infants and a woman in late stages of pregnancy, in Lampedusa.

On October 19th, the crew on Aita Mari, rescue ship of NGO Salvamento Maritimo Humaniario, rescued 105 people in international waters in the Maltese search and rescue region. Five days later, the ship was assigned Trapani, Sicily, as a place of safety to disembark the survivors.

Between October 22nd and 24th, the crew on MSF rescue ship Geo Barents rescued more than 350 people from distress at sea, with some rescue operations taking place in rough weather conditions. After several days of waiting, the ship received instructions to disembark the survivors in Palermo, Sicily.

On October 23rd, the Italian coastguard rescued 339 people off the coast of Italy’s Calabria region from an old metal fishing boat that departed from Tobruk, Libya.

The captain of Italian offshore supply vessel Asso Ventotto was sentenced to a year prison for returning people rescued at sea to Libya according to Avvenire. In 2018, the crew of the ship rescued 101 people from distress at sea near Sabratha oil platform before returning them to Libya despite the obligation to disembark survivors in a place of safety as maritime law dictates. A court in Naples now found the captain guilty of abandonment-related charges, as the Associated Press reports. The most serious charge, abuse of office, was dropped.

The situation for asylum seekers and refugees in Libya meanwhile remains dire. The United Nations High Commissioner for Refugees condemned the raids and arbitrary arrests carried out by Libyan authorities earlier this month and called on the international community “to offer more legal pathways to safety outside Libya”. The agency obtained authorization to restart humanitarian evacuation flights.

Pope Francis urged State leaders not to return migrants to unsafe countries such as Libya, comparing the horrors of arbitrary detention in the country to concentration camps. The Pope asked that rescue at sea and orderly disembarkations be prioritised and legal paths to immigration and asylum established, Reuters reports. In an interview with Le Monde, Jean-Paul Cavalieri, Head of Mission of the UNHCR in Libya, said that “almost all migrants disembarked in Libya by the Libyan coastguard end up in detention centres”.

Meanwhile, the International Organisation for Migration reports that 846 people were intercepted at sea and returned to Libya by the Libyan Coastguard in the week from October 17th to 23rd. One person was reported missing.

The public prosecutors of the Sicilian region of Agrigento have asked for the case against the captain and owner of the Mare Jonio, rescue ship of NGO Mediterranea, to be dismissed. The prosecutor’s office has asked the judge presiding over the preliminary investigation to drop the charges of “aggravated facilitation of undocumented migration and violation of the Italian navigation code” following the rescue of 30 people conducted in the Libyan Search and Rescue region and their subsequent disembarkation in Lampedusa in May 2019.

On October 23rd, the trial against former Italian Minister of the Interior Matteo Salvini started in Sicily. Matteo Salvini is accused of deprivation of liberty and abuse of authority for his role in preventing the rescue ship Open Arms from disembarking survivors in an Italian port in August 2019. The Open Arms remained moored off Lampedusa, not permitted to dock, for 19 days with initially more than 160 rescued people. The next hearing in the case is set for December 17th, according to the Guardian.