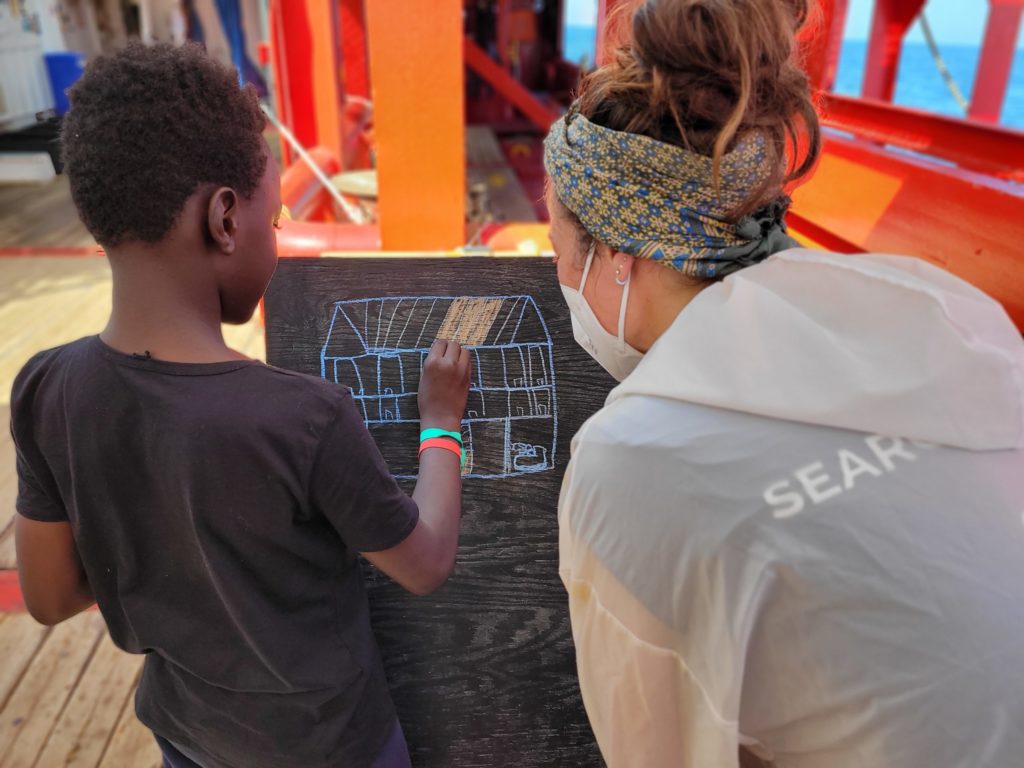 Laurence Bondard is communications officer onboard the Ocean Viking for SOS MEDITERRANEE. She was onboard in September 2021. The crew rescued 129 lives from four wooden boats in distress.

“I was deeply moved when I saw this child, Sidiki, drawing with the benevolent company of Justine, one of SOS MEDITERRANEE search and rescue team member. When he arrived onboard the Ocean Viking, Sidiki looked closed in on himself. He didn’t smile. Barely talked, and when he did, he would only whisper. It took me several bouts of play with him before realizing that we both spoke French. He observed everything and everyone with a worried, deep, look.

When we met this young 11-year-old kid, he had just been rescued from imminent death. He was on a makeshift boat, in the middle of the Mediterranean Sea, with 24 other people in danger of being swallowed at any time. They were in an unimaginable situation. Even after witnessing it, it seems unreal. Yet, he was there, appearing in between waves, with his older brother and other people driven by the only hope they had left to survive “hell”. To flee Libya. We can fear that he has at least witnessed harrowing violence and abuse, if not been subject to some.

Observing him express himself on this chalkboard was beautiful. Seeing him drawing a house was something else. To me, he was not just drawing a house like any other kid where I am from. Like I used to do at his age. It seemed that he was drawing solid walls, and a strong roof. A house that had comfortable beds. In my mind, it symbolized his vital need of safety. A quest for refuge coupled with my colleague’s T-shirt inscription: “Search”.

We search to rescue. Sidiki searches for protection. A quest that leaded him and 128 other people rescued between September 18 and 19, to be at risk of disappearing in high seas, without any witness. At least 1,300 women, children and men are known to have perished in the Mediterranean since the beginning of the year. Over 22,000 since 2014. Sidiki is not one of them. He remains a moving child, on the move.”