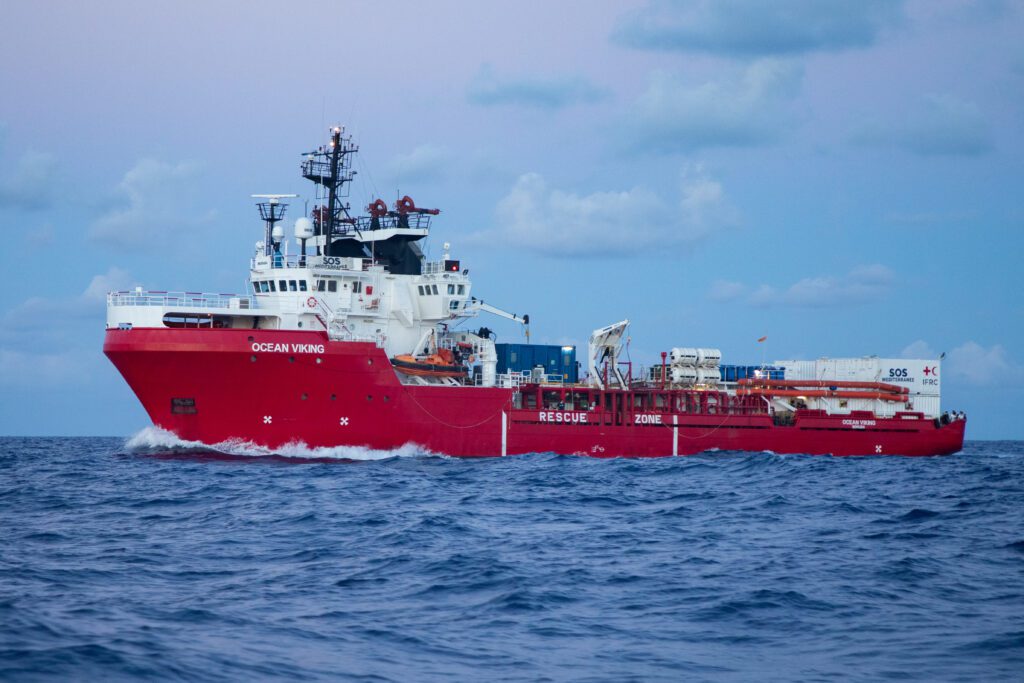 Marseille, 15 December 2022 – As the Ocean Viking prepares to return to the central Mediterranean to save lives, SOS MEDITERRANEE is alerting to its financial situation at the end of 2022, a year that has been severely impacted by the consequences of the war in Ukraine. Faced with a sharp increase in its operating costs, the association is calling to the generosity of the general public, patrons and local authorities.

The central Mediterranean is the deadliest sea migration route in the world since 2014. In 2022, at least 1,362 women, men and children are known to have lost their lives in this stretch of the sea. In the face of this humanitarian tragedy, Search and Rescue NGOs such as SOS MEDITERRANEE play a vital role. However, following the outbreak of the war in Ukraine, the year 2022 has proved to be extremely difficult from a financial point of view. SOS MEDITERRANEE is facing an additional cost of more than one million euros due to the meteoric rise in the price of fuel for its vessel, which doubled, and to the increase in the cost of equipment and services necessary for its rescue operations. This occurred while a significant amount of public and private generosity has been directed towards Ukraine this year.

“We cannot envisage that a rescue vessel as efficient as the Ocean Viking, with professional and dedicated seafarers on board, is docked for financial reasons when every day, lives could be saved in the central Mediterranean,” worries Sophie Beau, co-founder and executive director of SOS MEDITERRANEE.

Since the beginning of its operations in 2016, SOS MEDITERRANEE has rescued 37,023 people with the Aquarius and then the Ocean Viking. Nearly a quarter of these survivors were minors.

“Our financial situation is very difficult at the end of 2022, but we are not giving up. To continue to face the humanitarian tragedy in the Mediterranean, we call for financial support from all those who share our values: citizens, organisations, institutions, local authorities, respond to our SOS! Your donations save lives!  Since 2016, you have always given us the means to act, and more than ever we need you. We are confident that we will be able to overcome these difficulties again this year, thanks to your support”, concludes Sophie Beau.

– SOS MEDITERRANEE charters the Ocean Viking, a robust vessel of 69 metres in length and 15 metres in width. It is equipped with three semi-rigid lifeboats (RHIBs), as well as a clinic and the supplies needed to rescue hundreds of people.

– A team of professional rescuers, medical and care staff work on board the Ocean Viking.

– The skills and commitment of the SOS MEDITERRANEE teams were recently recognised by the International Maritime Rescue Federation (IMRF). “An award that recognises those who have demonstrated excellence in their field, developed innovative technology or equipment, or acted as a role model to inspire others,” explains the IMRF.

Since 2014, more than 25,000 men, women and children are known to have perished in the Mediterranean attempting to cross on makeshift boats. SOS MEDITERRANEE is a European humanitarian and maritime search and rescue organisation operating in the central Mediterranean. It was founded by citizens in May 2015 in response to the deaths in the Mediterranean and the failure of the European Union to prevent these deaths.

The association is based in France, Germany, Italy and Switzerland. SOS MEDITERRANEE received the 2017 Unesco Houphouët-Boigny Peace Prize and won the prestigious International Maritime Rescue Federation (IMFR) award in 2022 for “outstanding contribution of a team to search and rescue operations at sea”.