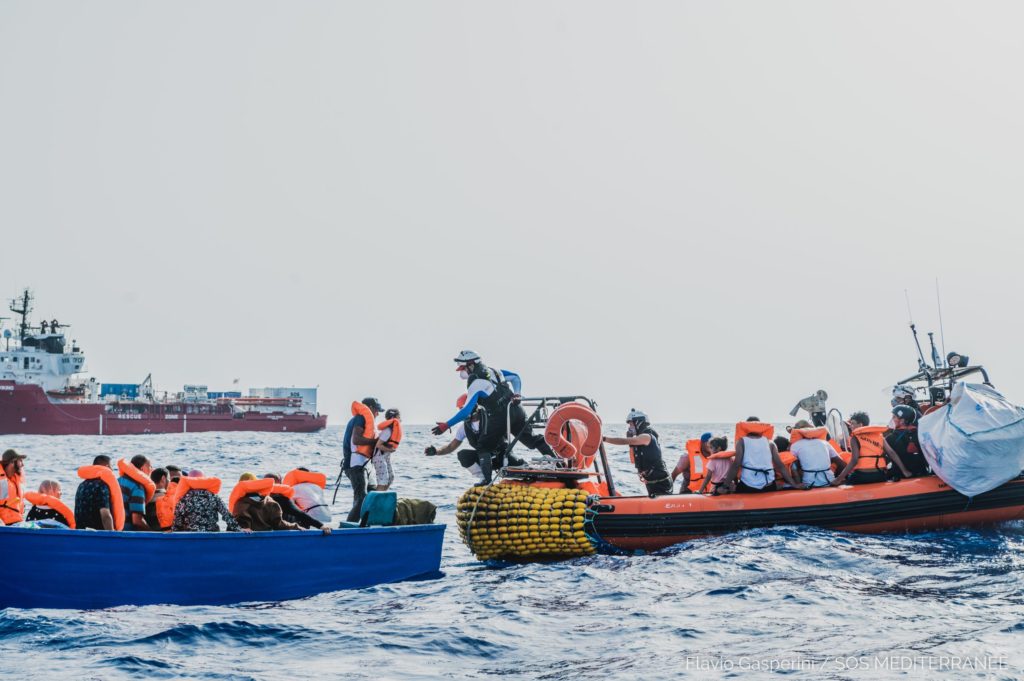 In 2021, despite the challenges inherent to the COVID-19 pandemic and the ever-increasing complex situation in the central Mediterranean, SOS MEDITERRANEE teams rescued a total of 2,832 people in distress in 33 operations. This year-in-review highlights the search and rescue operations of the Ocean Viking in 2021.

After being detained for five months in Porto Empedocle, Sicily, the Ocean Viking can eventually set sail toward the central Mediterranean again. In four operations, the teams were able to rescue a total of 373 men, women and children. While survivors waited four days before getting assigned Augusta, Sicily, as a Place of Safety (a safe port), the weather increasingly deteriorated and many survivors were seasick. 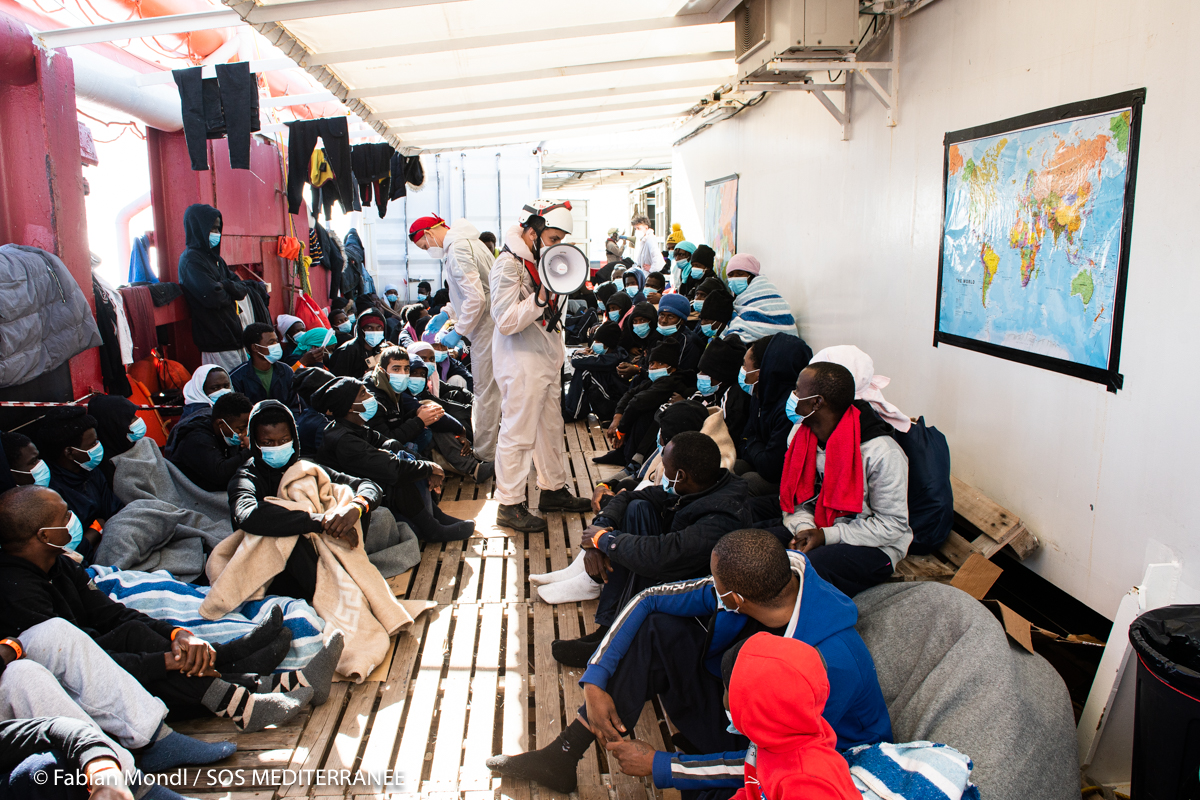 In January and February 2021, cartoonist Hippolyte and journalist Nejma Brahim embarked on the Ocean Viking to document the ongoing humanitarian crisis happening in the central Mediterranean. While Nejma Brahim wrote a series of article for the French online investigative news website Mediapart, Hippolyte captured a special moment in the women’s shelter of the Ocean Viking: women improvised a song to thank the crew of SOS MEDITERRANEE.

Since the beginning of SOS MEDITERRANEE’s search and rescue operations, about 15% of the 34,631 people we rescued in the central Mediterranean were women. Once the evacuation phase from the boat in distress is over and survivors are on board the Ocean Viking, one of the first needs identified for these women is for them to rest and feel safe in a place where they do not have to fear for their lives. Many of them have been exposed to many types of violence and/or forced labour. The Ocean Viking has a shelter dedicated for women and children on the aft deck, where their privacy is ensured. 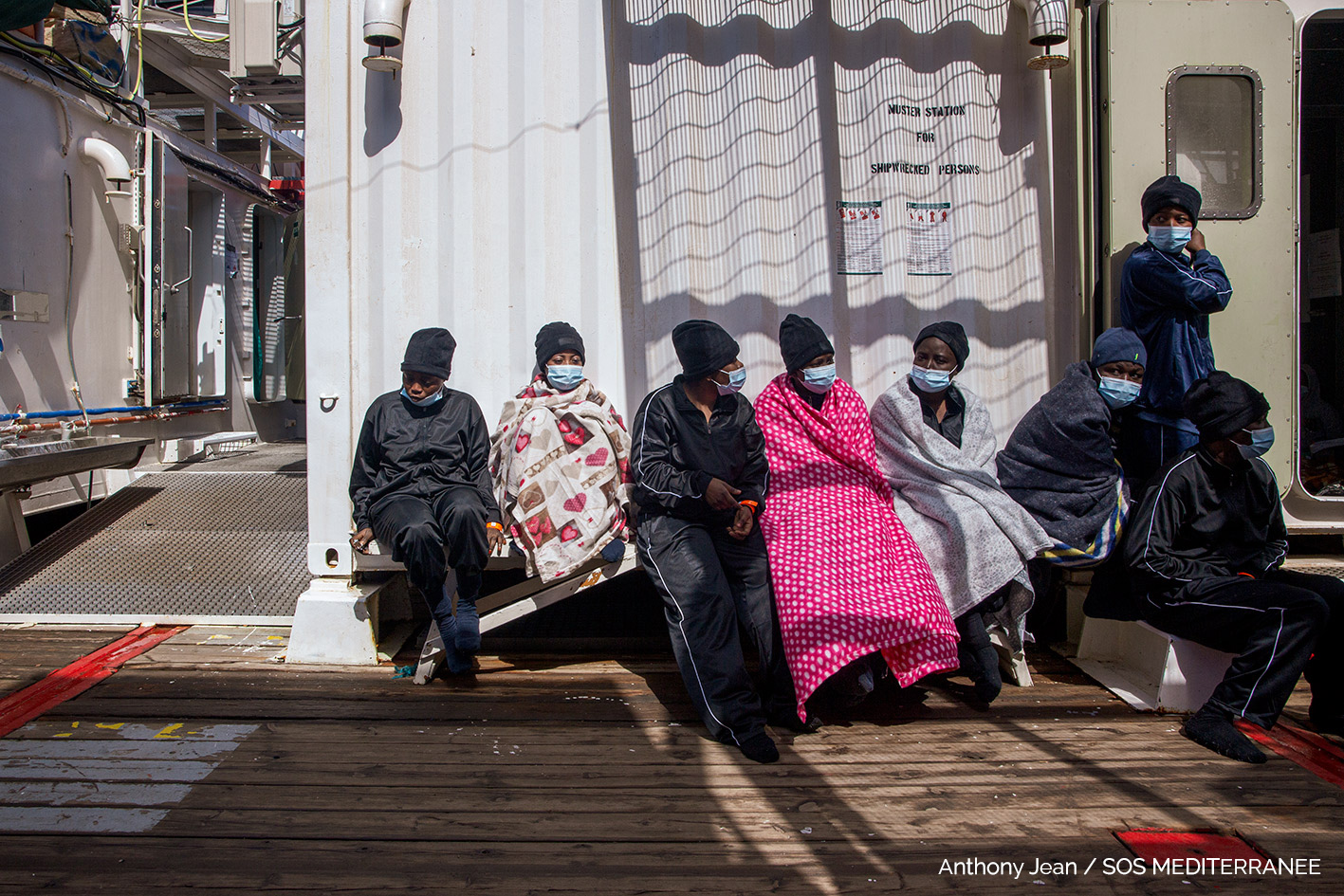 On April 22, after hours of search in a race against time and in very rough seas, the SOS MEDITERRANEE crew witnessed a shipwreck claiming at least 130 lives. During the search, no coordination or support were provided by the relevant maritime authorities.

“States abandon their responsibility to coordinate Search and Rescue operations, leaving private actors and civil society to fill the deadly void they leave behind. We can see the result of this deliberate inaction in the sea around our ship,” declared Luisa Albera, search and rescue coordinator on board the Ocean Viking, in the aftermath of the shipwreck.

Shortly after, the crew was able to rescue 236 people from two overcrowded rubber boats in distress. 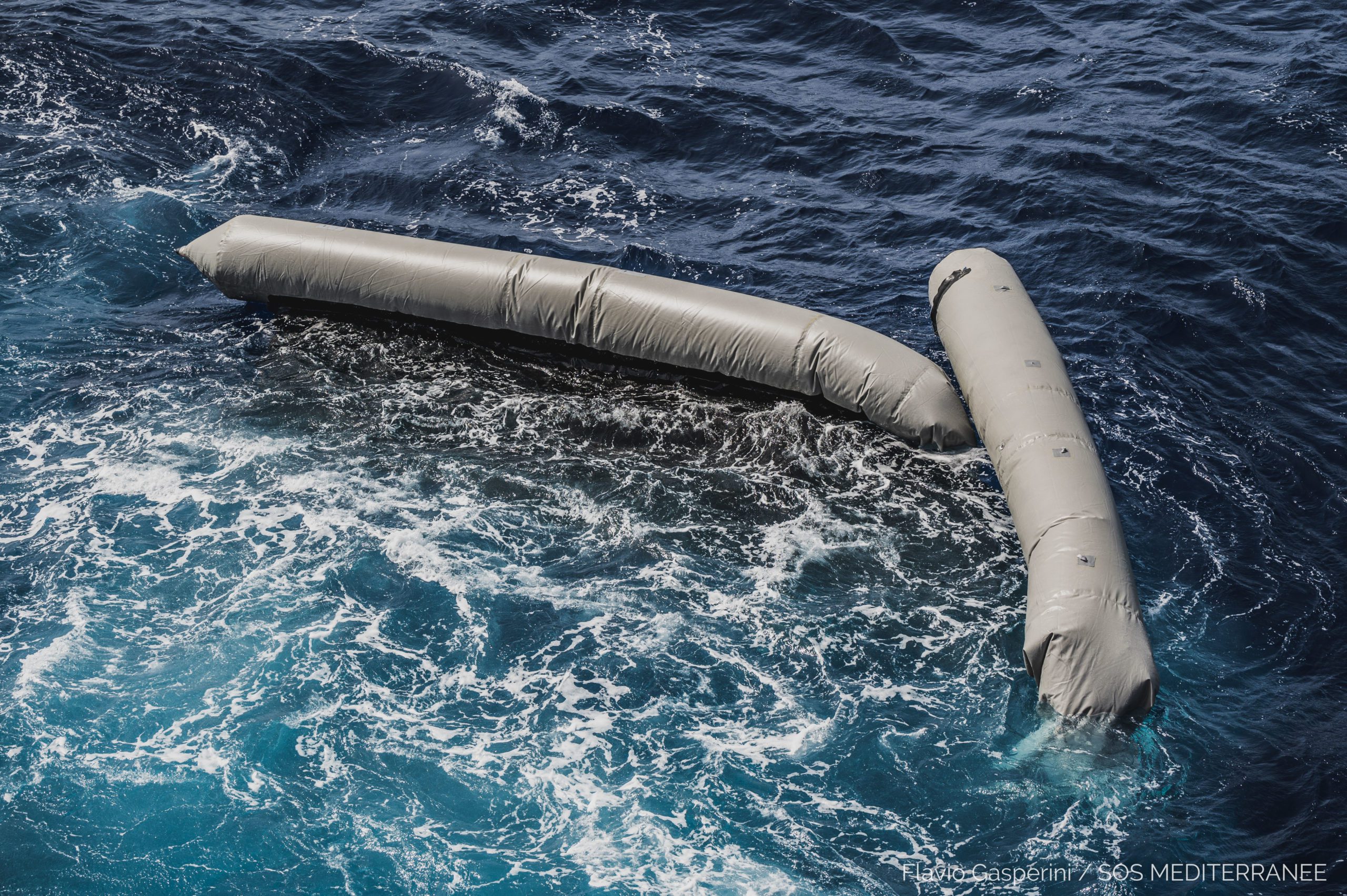 After disembarking 236 survivors in Augusta, Sicily, the Ocean Viking entered a shipyard in Naples, Italy, on May 25, to undergo mandatory and routine maintenance. In an interview, our maritime manager, Stéphane, explained what a drydock is and what improvements were made on the Ocean Viking. 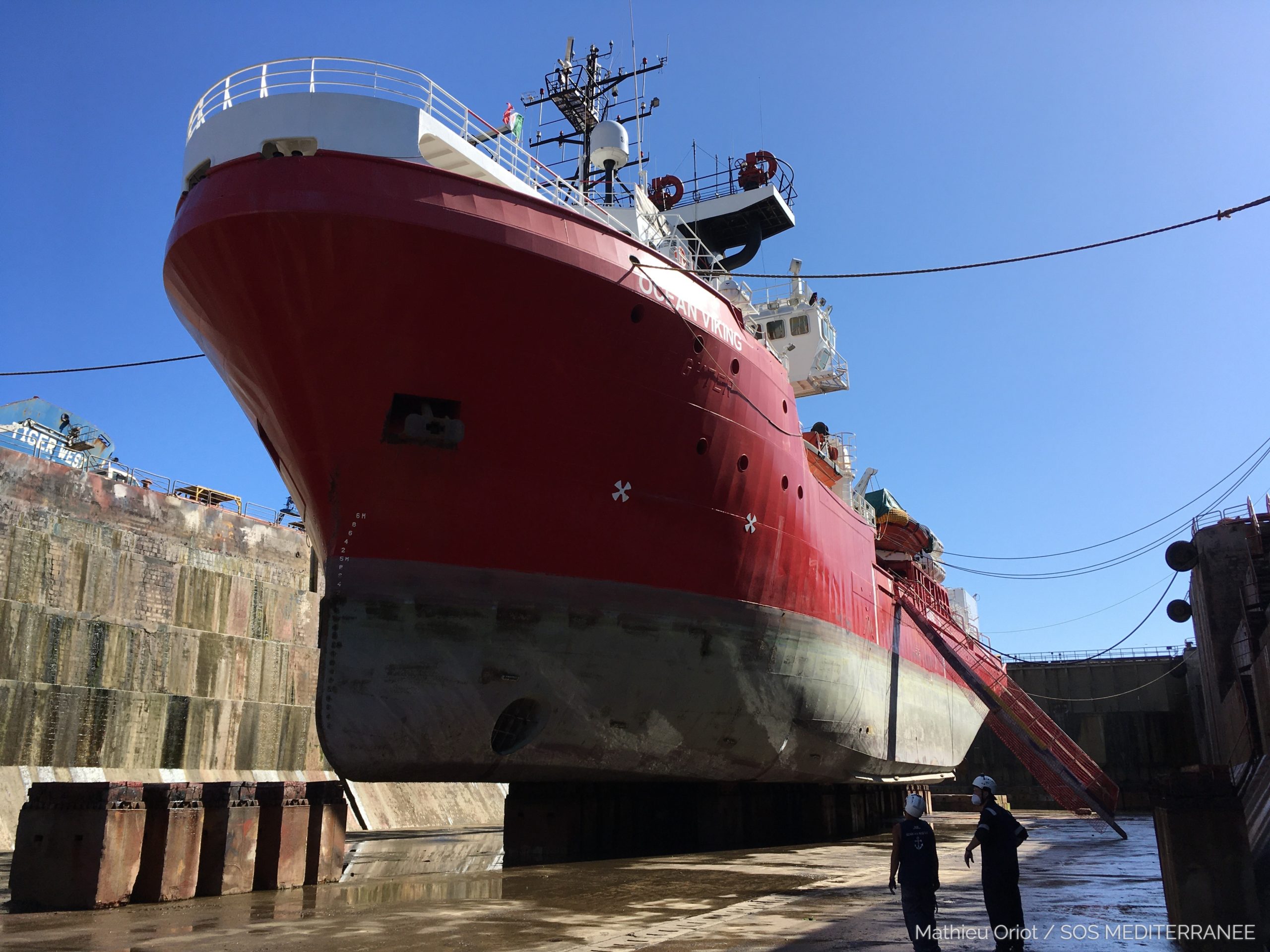 In early July, the crew on the Ocean Viking rescued 572 people in six rescue operations in 36 hours. Among them were many minors, two with disabilities. The Ocean Viking sent eight requests for a Place of Safety before eventually being assigned the port of Augusta, Sicily, for the disembarkation of survivors. In the meantime, the physical and psychological condition of the survivors deteriorated because of the uncertainty, lack of space and high temperatures among other factors. The prepacked food rations were also running out. One man in acute psychological distress jumped overboard and was consequently rescued by our teams. Before the disembarkation of the survivors occurred on July 10, Luisa Albera, search and rescue coordinator, issued a statement: “the situation is beyond imagination. Tensions and exhaustion are at the upmost onboard Ocean Viking”. 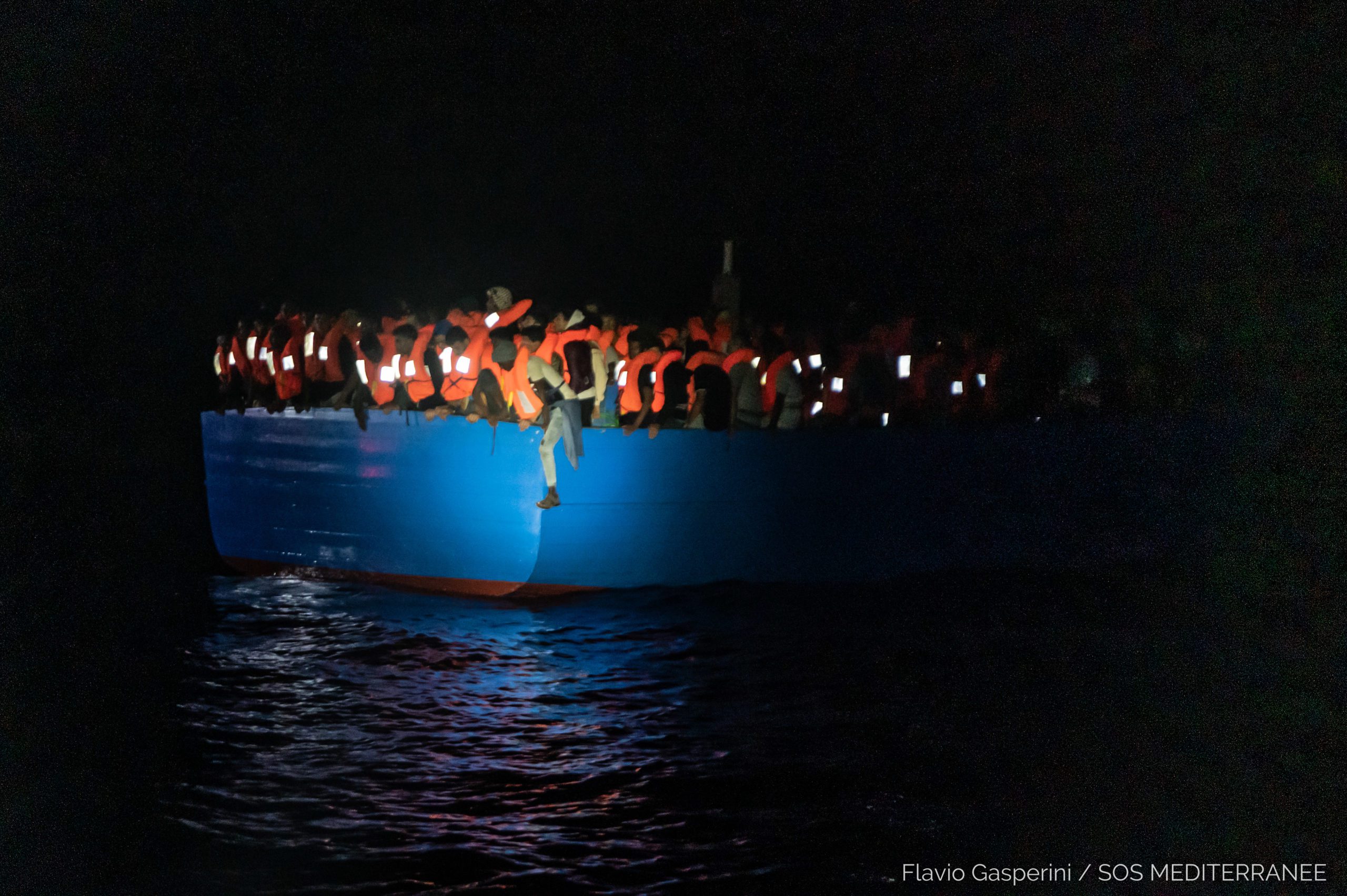 During the night of July 31 and August 1, the Ocean Viking crew, and the crews of NGOs Sea-Watch and ResqShip, were involved in a difficult rescue of about 400 people from a large wooden boat that was filling in with water. Just a few hours later, the SOS MEDITERRANEE crew rescued 106 people. As the sea was becoming rougher and the heat was increasing, the health of survivors deteriorated, and three medical evacuations were conducted. After six days of standoff, Pozzallo, Sicily, was assigned as a Place of Safety. The disembarkation of 549 survivors onboard the Ocean Viking took four days. 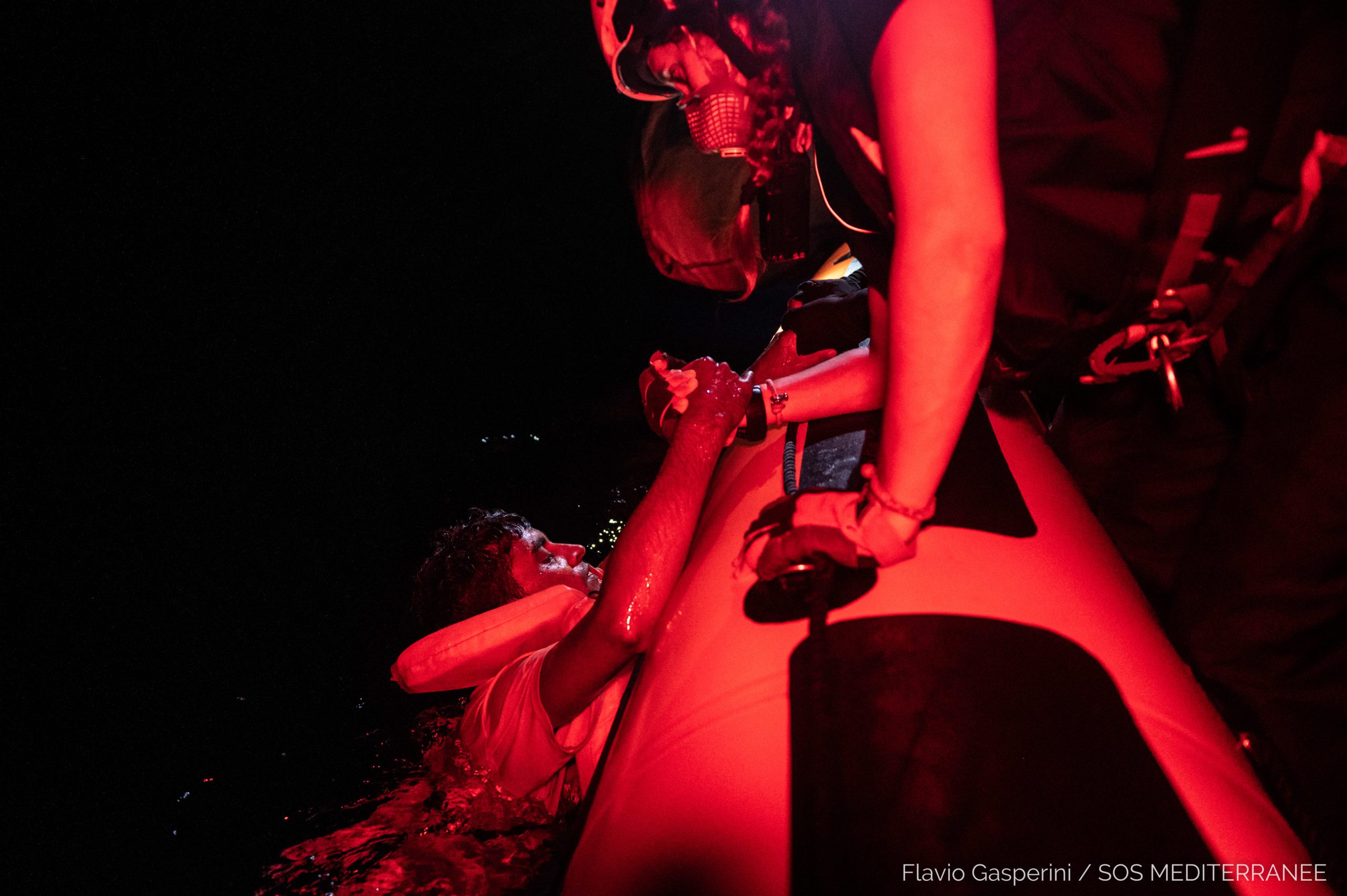 After more than a year of having internalised the medical and care teams into the SOS MEDITERRANEE crew, five members of the International Federation of the Red Cross and Red Crescent Societies (IFRC), our new partner, joined the Ocean Viking on September 13n. The IFRC now provides post-rescue support, such as medical care, psychological supportand covers survivors’ basic needs onboard the Ocean Viking. 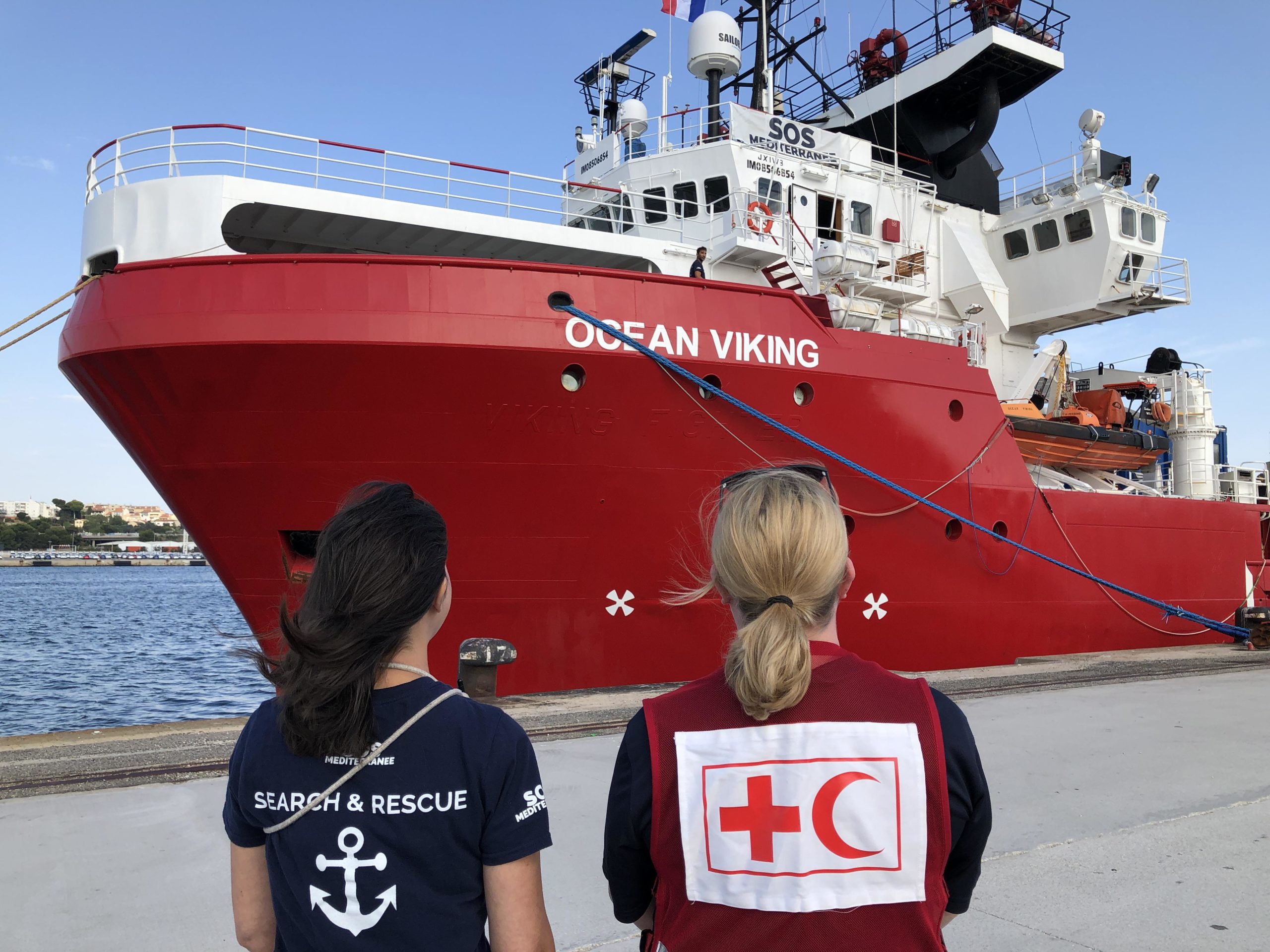 For the mandatory annual inspection of her life-saving appliances, the Ocean Viking entered a shipyard in Naples, Italy, in October. Maintenance work was also carried out on deck. Regular maintenance is key to conduct safe operations at sea. 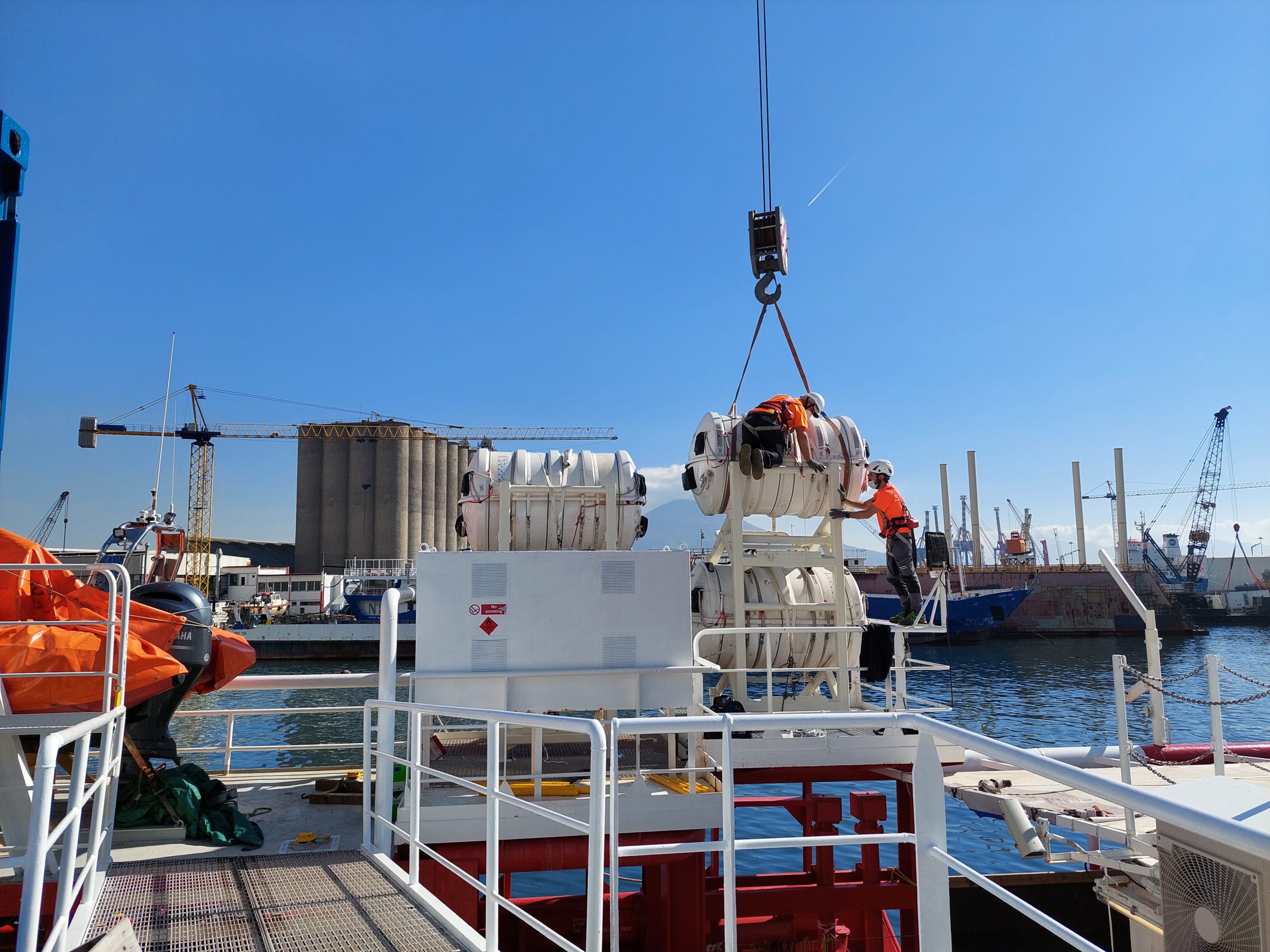 In early November, the crew on the Ocean Viking rescued 314 people from four boats in distress in less than four days. After two medical evacuations, the 306 remaining survivors on board had to wait for nine days before being assigned a Place of Safety (a safe port) in worsening weather conditions. Pouring rain and four-meter waves were washing over the deck.

On December 16, the crew on the Ocean Viking rescued 114 people from an overcrowded rubber boat. 30 of them were minors, two of them new-borns. For the first time in several months, the Ocean Viking was operating simultaneously with at least four other civilian rescue ships (Sea-Eye 4, Sea-Watch 3, Geo Barents, Rise Above) in the central Mediterranean. Survivors could disembark in Trapani, Sicily, on Christmas Day, nine days after the rescue. 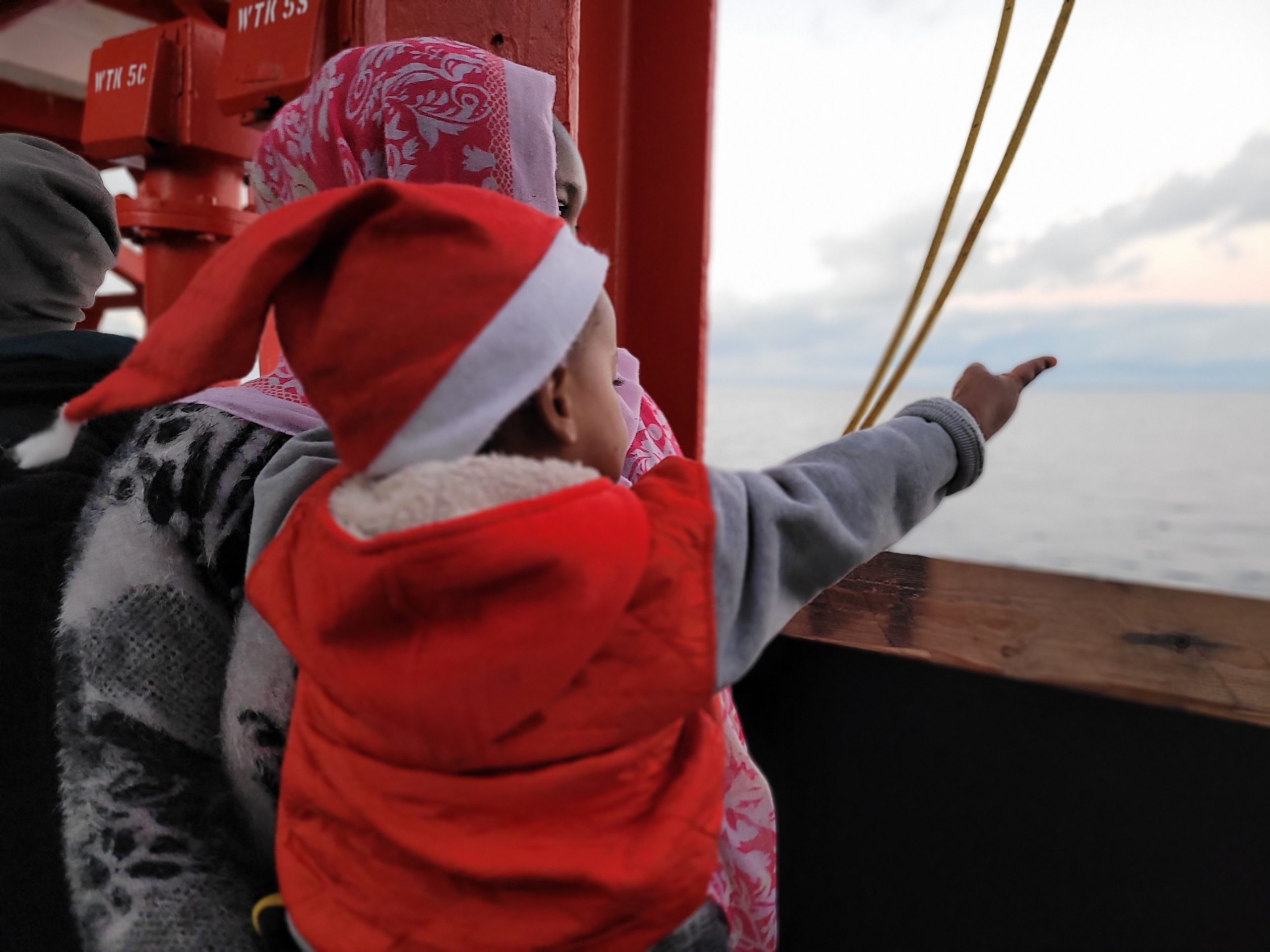