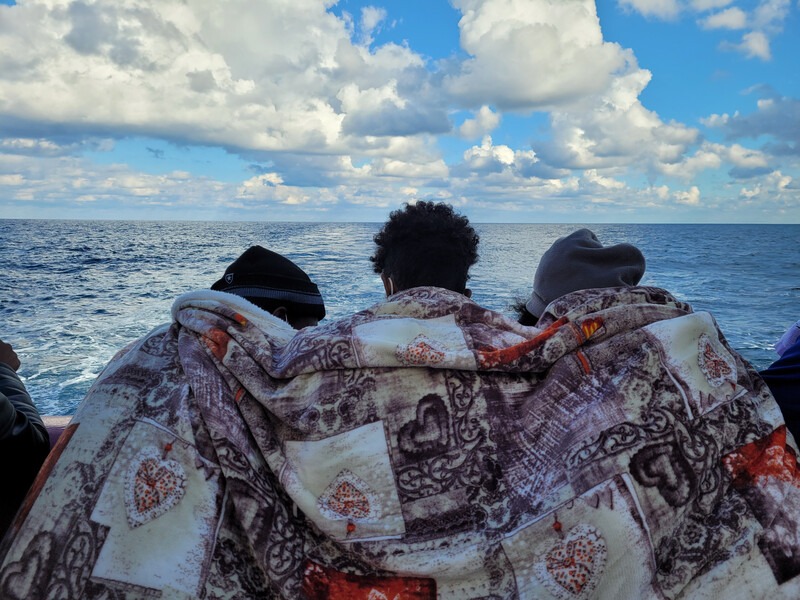 Marseille, December 23 – 114 survivors are stranded on board the Ocean Viking with no solution in sight for their disembarkation, one week after they were rescued in the central Mediterranean. Symptoms of exhaustion and anxiety are becoming increasingly prevalent among the rescued. SOS MEDITERRANEE calls on maritime authorities to assign a port for their disembarkation without further delay.

After two weeks of bad weather conditions preventing departures from the coast of Libya, the weather improved, and departures of unseaworthy dinghies started again since last week. Over 160 people have reportedly died in two shipwrecks off Libya. Civil rescue ships such as the Geo Barents, the Sea-Eye 4, the Rise Above and the Ocean Viking have rescued over 800 people from several boats in distress. In the early morning of December 16th, the Ocean Viking – a rescue ship chartered by civil maritime and humanitarian organisation SOS MEDITERRANEE in partnership with the International Federation of Red Cross and Red Crescent Societies (IFRC) – rescued 114 people from a rubber dinghy in distress in international waters off Libya. Among them are women travelling alone, two children under eight and two new-borns. A week after their rescue, they are still at sea with no certainty regarding their disembarkation.

Despite the utmost care provided by the Ocean Viking teams, signs of fatigue, exhaustion and anxiety are increasing among the survivors. Their plight at sea, following their recent near-death experience, and the uncertainty they are facing, must end. According to maritime law, rescues are only complete once survivors are disembarked in a Place of Safety. The harshness of winter weather conditions at sea, with cold temperatures and permanent humidity, are additional difficulties.

Whilst waiting for a Place of Safety, some of the survivors shared part of their stories, recounting harrowing experiences of violence and abuse in Libya. A minor, Asante (his name was changed), told one of our team members: “In Libya, you can be killed only for a phone. People came at night with knives and put them on my body like this [showing the gesture of someone pressing a knife to his belly], asking for my phone. I only used it to call my family, but they took it, every time. You never sleep safely in Libya. […] It was very hard. […] Staying in Libya is not safe.”

Makbyel was 11 days old when he was rescued. Today, he has spent almost half his life at sea. Following their rescue, his mother gave him “Sos” as a middle name. Due to a very difficult delivery in Libya and her perilous journey soon after that, she was in great pain when our medical team cared for her after she was rescued. She is extremely vulnerable, exhausted and needs to be taken care of in a safe environment, as does the other new mother onboard, whose baby was 3 weeks old when rescued by the Ocean Viking teams.

“In this cold and in confined spaces, the situation can only get worse by the hour for the survivors onboard Ocean Viking”, says Luisa Albera, Search and Rescue Coordinator onboard Ocean Viking. “A ship, as well equipped as possible, can only be a short-term solution. Imposing a prolonged period at sea on people who have already suffered so much puts their physical and mental health at further risk. These past three years, we have been repeatedly stranded at sea with shipwrecked people onboard: we know the implications of such difficult situations too well. They lead to grave consequences, acute psychological distress and increasing deterioration of physical health. We must disembark now.”

As required by international law, the Ocean Viking has sent six requests for a Place of Safety to competent maritime authorities. We call on European states not to turn a blind eye to the plight of rescued people and to assign safe ports to survivors currently onboard NGO rescue ships waiting to disembark.