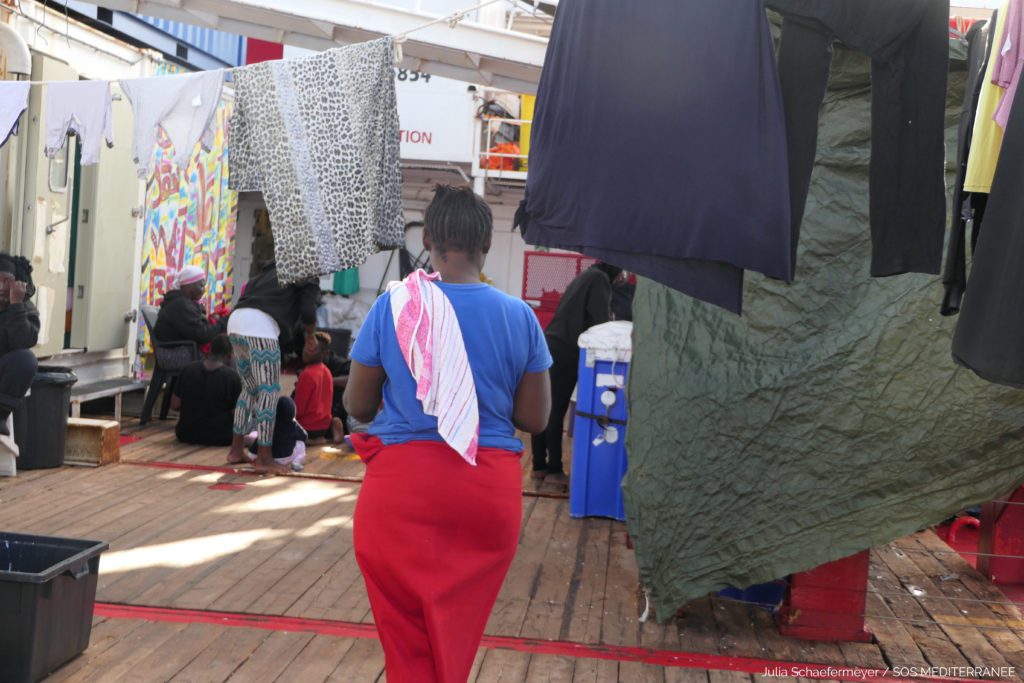 Today, SOS MEDITERRANEE and Médecins sans Frontières (MSF) call on a broad coalition of European States to urgently facilitate the assignment of a port to the Ocean Viking and to finally put in place a predictable and coordinated disembarkation mechanism as discussed in Luxembourg earlier this month. The Ocean Viking, a rescue ship chartered by SOS MEDITERRANEE in partnership with Médecins sans Frontières (MSF), is still stranded, waiting for a Place of Safety for the disembarkation of 104 people rescued in international waters off Libya ten days ago.

“In the past four months, several European leaders met on three occasions (in Paris, Malta and Luxembourg) showing a will to establish a temporary disembarkation and distribution mechanism for people rescued in the Central Mediterranean,” said Louise Guillaumat, Deputy-Director of SOS MEDITERRANEE’s Operations. “Yet today, 104 survivors are once again left in limbo on the deck of a rescue ship with no solution for their disembarkation in sight, adding to their suffering after being rescued from distress at sea. Europe can and should show more solidarity towards its coastal States,” she added.

Amongst 104 people rescued by the Ocean Viking on October 18, are two pregnant women and 41 children under the age of 18 – the youngest just eleven months and two months old, with one born in a detention centre in Libya according to the mother. The vast majority (76%) of minors report to be travelling unaccompanied, without a parent or guardian. Many of the survivors report to have been trapped in Libya for several years, with some saying they fled because of the active fighting that began in April this year.

“Every patient seen in the MSF clinic so far has reported to have suffered or been witness to violence or sexual violence at some point in their journey. Women have told our medical team they fled their home countries because of forced marriage, female genital mutilation or sexual violence,” said MSF Head of Mission, Michael Fark.

“It is unacceptable that for ten days now these vulnerable people have not only had to endure the elements of being stranded in the open sea, but also the uncertainty of not knowing what will happen to them. This prolonged and unnecessary time at sea must come to an end. We urge European leaders to live up to their principles and allow the survivors to finally disembark to safety,” said Fark.

As the Ocean Viking remains stranded, new cases of distress are reported in the Central Mediterranean, with two rescues conducted by NGO rescue ships over the weekend, including one critical by the Alan Kurdi. As has often been the case in the past year, this rescue seems to have been conducted in a context of confusion with the competent authorities. At least 692 people died attempting to cross the Central Mediterranean this year alone. Rescue ships must not be delayed or hindered from their life-saving activities due to unnecessary drawn out stand-offs at sea.

A meeting of EU ministers in Luxembourg held in October reportedly led to an agreement on a six-month “pilot project” involving seven member States, which was seven less than the initial objective of fourteen countries announced in another meeting in Paris in July. In October, there were promising indications for the start of a disembarkation system based on respect for international law. Indeed, shortly after this meeting, the Ocean Viking was offered to disembark 176 people in Taranto, Italy within 26 hours of the rescue. Yet, less than a week after this, the Ocean Viking is again left stranded without a place of safety.

“The situation currently faced by the Ocean Viking shows how fragile the announced EU disembarkation pilot project is. This situation has lasted for too long. Returning to the one-off and ad hoc approaches of the past 16 months would be a step backwards. Unnecessary standoffs will only end if a broader coalition of willing European countries come together to support countries of disembarkation without further delay,” said Louise Guillaumat, Deputy-Director of SOS MEDITERRANEE’s Operations.

On October 18, the Ocean Viking rescued 104 people from a rubber boat in distress, 50 nautical miles off the Libyan coast. The boat in distress was spotted through binoculars.

The Ocean Viking requested a Place of Safety to the competent maritime authorities soon after. The Libyan Joint Rescue Coordination Centre (JRCC) appointed the port of Tripoli as a “Place of Safety” on the day of the rescue, which the Ocean Viking could not accept. No port in Libya can be considered safe according to international law.

Until when will Europe let a part of humanity sink in the Mediterranean Sea?