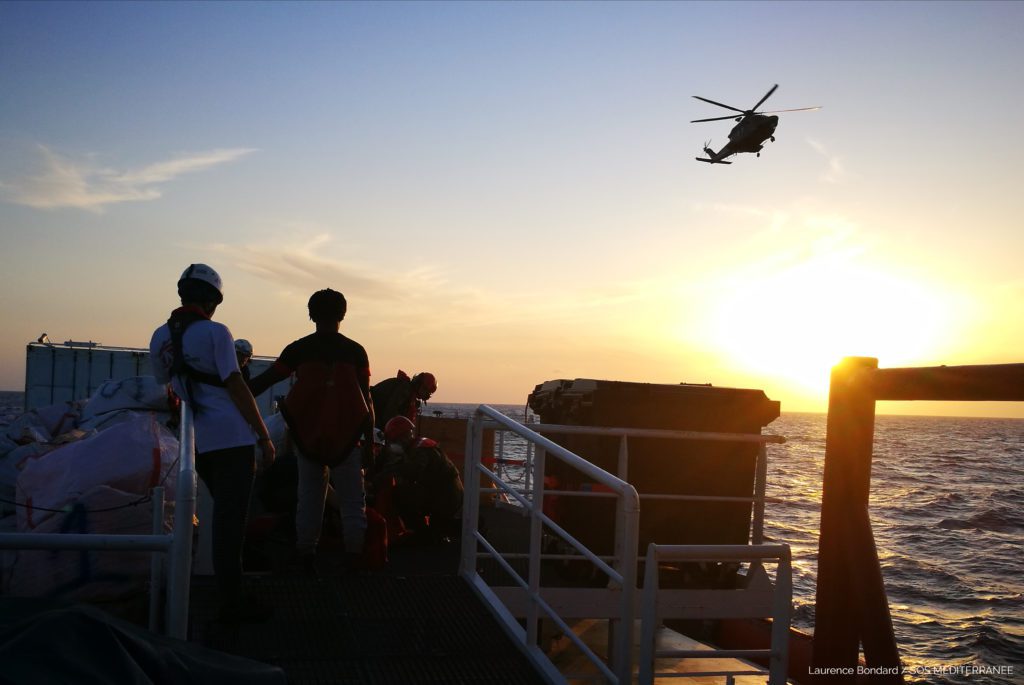 Central Mediterranean, September 12, 2019 – On Wednesday, September 11, a nine-month pregnant woman and her husband were evacuated by helicopter from the Ocean Viking by the Maltese authorities after medical complications were reported by the medical team onboard. “Despite initially doing well, the latest examination Wednesday morning by the MSF midwife and medical team on board revealed the mother had a serious medical complication which could put her and the baby at risk”, stated Médecins sans Frontières’ doctor.

82 survivors, rescued by the Ocean Viking in two search and rescue operations, now remain onboard the Ocean Viking, a rescue vessel operated by SOS MEDITERRANEE in partnership with MSF.

On Sunday, September 8, 50 people – including 12 minors and one pregnant woman – were rescued from a rubber boat in distress in international waters. Following a 16 hour search operation, with the participation of aircrafts (EUNAVFOR MED and Moonbird), the boat was eventually found adrift, 14 nautical miles off the Libyan coast. After a rescue that took almost three hours, the survivors were brought to safety aboard the Ocean Viking. The next evening, as weather conditions deteriorated rapidly, 34 people previously rescued by the sailboat Josefa were transferred to the Ocean Viking at night. The 14m-long sailing-boat was navigating in extremely difficult conditions, amidst heavy rain and thunderstorm, with no shelter on deck for the rescued people – including a pregnant woman and a one-year-old child in need of medical assistance.

Competent maritime rescue coordination centres were duly informed at all steps of these operations (Libyan Joint Rescue Coordination Centre – JRCC – in Tripoli, with Italian and Maltese Coordination Centres, and EUNAVFOR MED in copy), but no guidance was received during rescue and transshipment operations. The Ocean Viking requested a Place of Safety (PoS) to be assigned to the vessel and its 84 survivors. The Libyan JRCC responded by assigning the port of Zawiyah. Our teams had to decline this proposal, as Libya is not a safe place for disembarkation. This is stated by UNHCR in its guidelines on returns to Libya. It has been recently reiterated by The United Nations Human Rights office (OHCHR) in May 2019 and by the General Secretary of the United Nations after his visit to Tripoli in April 2019.

“As maritime law provides for, since Libyan authorities are not in a position to offer a Place of Safety, we extended our request for assistance to the most able to assist coordination centres, in Malta and Roma. It is a shared duty of all States signatories of the SAR conventions to collaborate in order to find a swift place of disembarkation that qualifies as a Place of Safety”, said Nicola Stalla, Search and Rescue Coordinator onboard the Ocean Viking.

After heading north to facilitate the evacuation of the two rescued people, the Ocean Viking is now waiting to be assigned a proper Place of Safety. With no rescue ship currently in the area to save lives off the Libyan coast, our ship that is perfectly able to assist must not be held up for days while men, women and children continue to flee Libya across the central Mediterranean with no humanitarian rescue assets present.