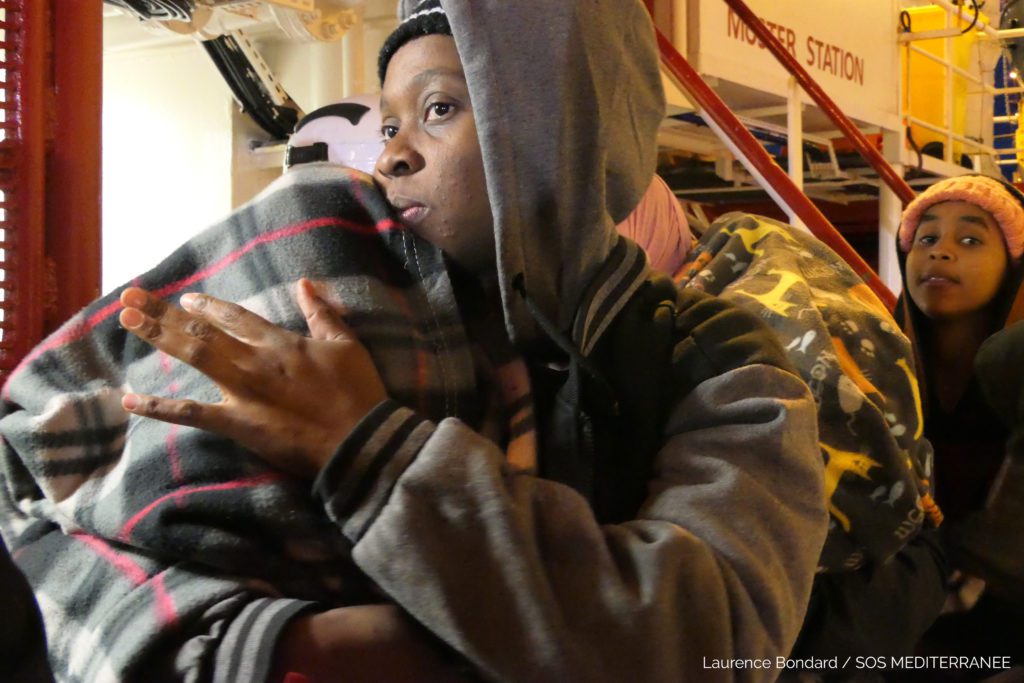 Mediterranean Sea, 24/12/2019 – The teams onboard the Ocean Viking, a rescue ship chartered by SOS MEDITERRANEE in partnership with Médecins sans Frontières (MSF), rescued 162 people in two challenging operations on Friday, December 20th. After the medical evacuation of a woman, her infant child and her sister on Sunday, the remaining 159 survivors disembarked in Taranto yesterday, December 23rd. SOS MEDITERRANEE’s teams are relieved that a place of safety was found in a timely manner in accordance with maritime law, and that those rescued on the brink of tragedy get to spend Christmas in safety.

162 people, including 50 minors and 5 pregnant women, were rescued by the SOS MEDITERRANEE Search and Rescue team in two critical rescues in international waters off the coast of Libya on Friday, December 20th.

The first rescue started in complete darkness around 5 am in international waters 34 nautical miles off the Libyan coast when an overcrowded rubber boat, reported in distress during the night, was finally spotted from the bridge of the Ocean Viking. The bow of the dinghy was entirely deflated upon the arrival of SOS MEDITERRANEE’s rescuers. The people on the boat, among them 7 babies, were terrified. Eventually all 112 men, women and children were brought to safety onboard the Ocean Viking.

Soon after this first rescue, the Ocean Viking was alerted to another distress case by citizen aircraft Moonbird (Sea Watch). After 8 hours of searching, the wooden boat in distress was spotted. Since the boat had entered the Maltese Search and Rescue Region, the rescue was conducted under the effective coordination of the Maltese authorities. 50 people were rescued in complete darkness around 11 pm in dire weather and sea conditions.

“Both rescues we performed last Friday were extremely difficult. As the weather was rapidly and severely deteriorating, both cases would almost certainly have resulted in tragedies if help had arrived only a little later,” explains Nicola Stalla, SOS MEDITERRANEE Search and Rescue Coordinator onboard the Ocean Viking. “The wooden boat was very likely to capsize. The rescue took place close to Lampedusa, where two shipwrecks occurred very recently. The rubber boat carrying 112 people without life jackets could have completely deflated as the bow was already collapsed when we arrived on scene. All of our team is under shock after such horrific sights and exhausting operations.”

A transfer of the 50 survivors to a Maltese military vessel, planned immediately after the 2nd rescue, had to be aborted and postponed due to weather conditions. The Ocean Viking raised the possibility to seek shelter near Malta in order to conduct the transfer in a timely manner. However, the Ocean Viking was not granted authorisation to enter Maltese territorial waters. The fear of another diplomatic standoff – in severe weather during Christmas week – arose among the survivors and crew.

There was great relief on board when the announcement was made on Sunday night by Italian maritime authorities that Taranto had been assigned as a Place of Safety. “All these survivors endured an ordeal fleeing Libya in this winter season. We sailed through more than 50 knots of wind Sunday night on the transit to Taranto. The rough sea was terrifying for the rescued people and it would have been very difficult for them to remain exposed to the elements much longer,” explains Nicola Stalla. “We are relieved to know that they have finally reached a safe place, and that we can resume our lifesaving mission soon.”

After yesterday’s disembarkation, the Ocean Viking will sail back out to the Central Mediterranean as soon as possible and the SOS MEDITERRANEE and MSF teams onboard are preparing to spend Christmas at sea. A dire need for European rescue assets remains as people continue to flee the horrors of Libya.