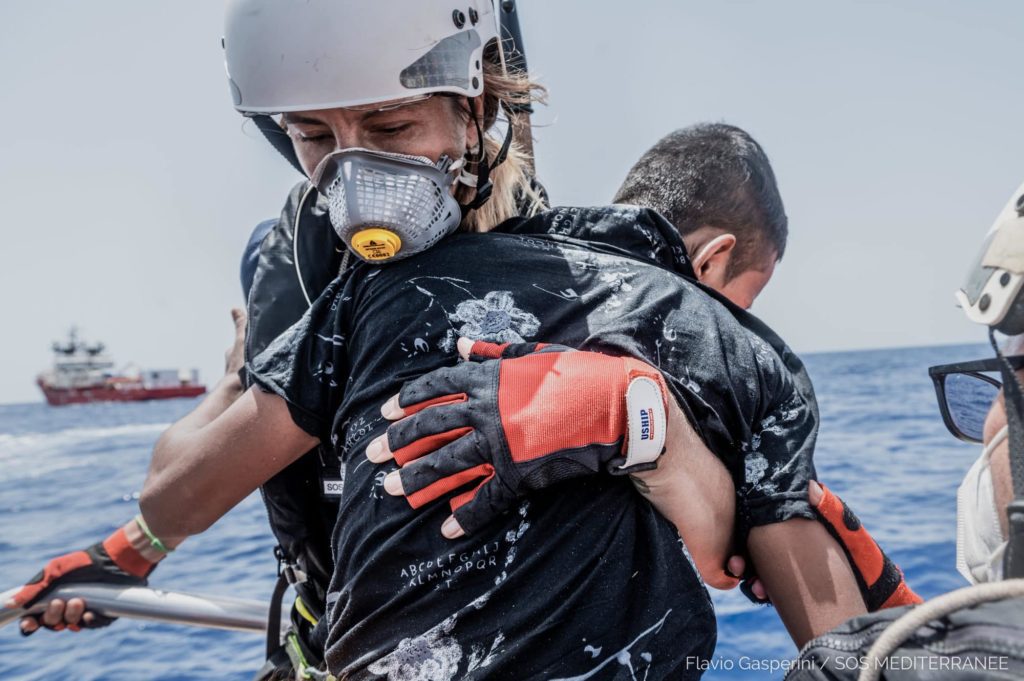 Following six rescue operations in the Maltese and Libyan search and rescue regions since last Thursday (July 1st), the Ocean Viking is caring for 572 survivors, including 183 minors, who urgently need to disembark in a Place of Safety.

Amid absence of maritime coordination, SOS MEDITERRANEE calls on EU to urgently coordinate for 572 survivors to disembark in a Place of Safety.

In just over 72 hours, the Ocean Viking -–a rescue ship chartered by civil maritime and humanitarian organisation SOS MEDITERRANEE- has rescued 572 people from six boats in distress in the central Mediterranean, with a continued absence of coordination and information-sharing by maritime authorities. The SOS MEDITERRANEE team onboard also found five empty wooden boats that were intercepted by Libyan Coast Guard in the Maltese search and rescue region.

“What we have witnessed at sea these past days is harrowing” says Luisa Albera, search and rescue coordinator for SOS MEDITERRANEE onboard the Ocean Viking. “Not only did we happen to rescue hundreds of people -who took the risk of dying at sea rather than staying in Libya- without any coordination by maritime authorities, but we also witnessed remains of other boats which were intercepted by the Libyan Coast Guard, even as far as in the Maltese Search and Rescue region. All those intercepted are being forcibly and unlawfully returned to Libya, which cannot be considered a Place of Safety according to maritime law. We are calling upon the EU to now at least coordinate for the disembarkation of 572 survivors, currently aboard our ship, in a Place of Safety”.

Largest rescue by Ocean Viking: hundreds of people crammed on one wooden boat.

In the night between Sunday and Monday, in the pitch black and after four hours of search, the SOS MEDITERRANEE rescue team found a wooden boat previously spotted by Pilotes Volontaires’ Colibri 2 aircraft. 369 men, women and children were crammed on a large wooden boat at risk of capsizing. Such large unseaworthy wooden boats launched from the coast of Libya had not been encountered by our teams in several years.

183 minors, including children with disabilities, among survivors.

On Sunday night, a woman had to be carried on a stretcher to be evacuated. In a rescue operation that led to the rescue of 71 people from another overcrowded wooden boat earlier on Sunday, not one but four persons had to be carried on a stretcher from their dinghy onto the Ocean Viking. These past days, the SOS MEDITERRANEE medical team onboard Ocean Viking treated cases of fuel burns, sun burns, dehydration and extreme exhaustion due to such dire journeys at sea. Some survivors reported having spent up to three days in the open sea before being rescued. Furthermore, two survivors, both part of the 183 minors onboard are with disability. One of them, partially paralysed, was found onboard a wooden boat along with his wheelchair.

Some survivors onboard the Ocean Viking told our teams about unimaginable violence faced in Libya. “There is too much torture in Libya” says Susanne*, a 36-year-old woman from Cameroon. “I managed to escape a detention centre with my daughter at 3am on Saturday morning. We had spent eight months there. The militias treated us like rubbish, like merchandise. They are raping us.”

Djimon*, a 23-year-old Beninese, also talked about repeated physical and sexual abuse. “I was kidnapped when I arrived in Libya. I spent two months in detention centres. I have been tortured since January. I was beaten until my leg was broken. They are raping everyone. I have spent four days without eating, without drinking.”

MSF’s Geo Barents detained: the Mediterranean must not remain a black whole this summer.

While the Ocean Viking was operating at sea, deeply concerning search-and-rescue related news came through over the last days. With the new Médecins Sans Frontières (MSF) ship, the Geo Barents, put under administrative detention by Italian authorities on July 3rd, almost all search and rescue NGO ships are again hindered from operating lifesaving missions in the central Mediterranean. According to the International Organization for Migration (IOM), 723 people died or went missing in the central Mediterranean so far this year. Several deadly shipwrecks were reported over the last few days alone.

SOS MEDITERRANEE calls for an efficient, lawful and humane European search and rescue programme to be urgently re-established, seven years after the end of operation Mare Nostrum. Europe can no longer remain passive in the face of recurring shipwrecks while consciously upholding a system of unspeakable abuse by supporting forced returns to Libya.

For more information about our latest operations at sea, see our online logbook: http://onboard.sosmediterranee.org/