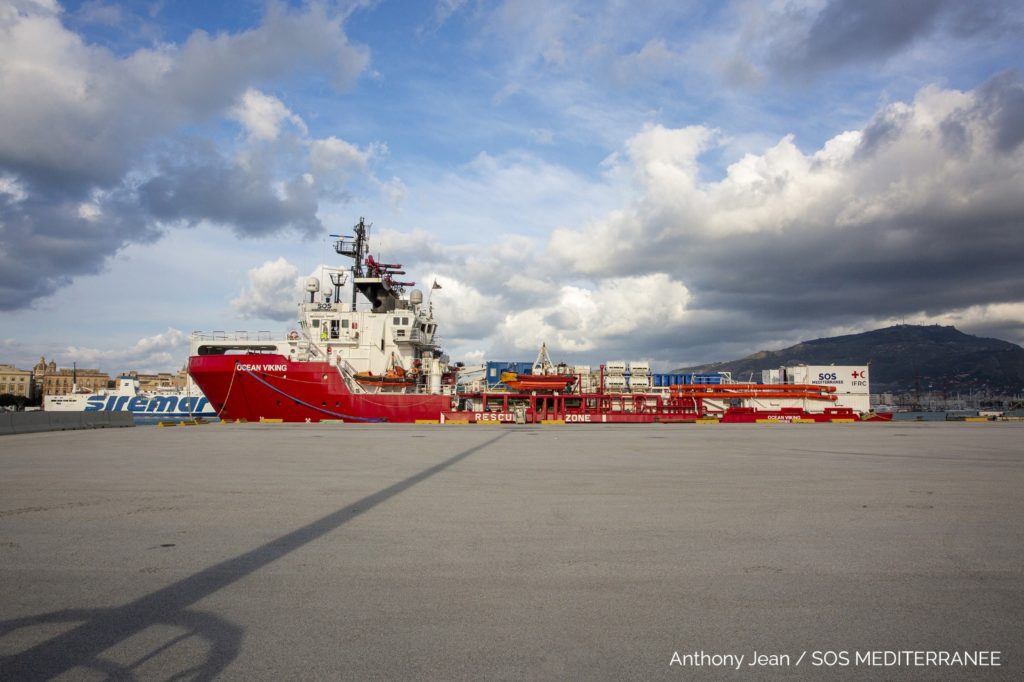 After more than 11 hours of inspection on January 10, 2022, the Ocean Viking, a rescue ship chartered by European maritime search and rescue organisation SOS MEDITERRANEE and operated in partnership with the International Federation of Red Cross and Red Crescent Societies (IFRC), is blocked in the port of Trapani, Sicily. Just over a year after the ship’s release from a five-month administrative detention, the Ocean Viking is detained again, on grounds that are unrelated to the previous detention.

After the Ocean Viking was detained in July 2020, SOS MEDITERRANEE, in cooperation with the shipowner of the Ocean Viking and the Norwegian Flag State authorities, undertook administrative and technical efforts to meet the new safety standards that were required by the Italian authorities. In December 2020, another Port State Control – an inspection of foreign ships in national ports – confirmed that all requirements were met, and all deficiencies noted during the previous inspection were rectified. Since then, in 2021, the teams on the Ocean Viking rescued and brought to safety 2,832 men, women and children in 33 rescue operations.

Since last month, the Ocean Viking was eligible for a new inspection as part of periodic Port State Controls under the Paris Memorandum of Understanding (Paris MoU). This new inspection occurred yesterday. This time, the main deficiencies noted by the Port State Control officers are related to another area of the ship: the container structures on the aft deck of the Ocean Viking. During this inspection, it has been estimated that these structures, added to the ship to shelter survivors and hold the equipment needed for our lifesaving work, has to be registered differently. The certification of these structures as cargo is put into question, two and a half years after the setup was installed in a professional shipyard and validated by all relevant regulatory bodies. 5,108 people have been rescued from distress at sea since the beginning of our operations and safely sheltered in these structures.

“We regret the extreme scrutiny our vessel continues to be subjected to. This inspection was the sixth port State control the Ocean Viking underwent since starting operations in the central Mediterranean in August 2019. This leads to new delays in the resumption of our operations while 2021 has been the deadliest year in the central Mediterranean since 2017. Last month only, at least 240* people drowned at Europe’s doorstep. Humanitarian vessels such as the Ocean Viking, filling the gap left by European states, are vital to prevent these repeated shipwrecks,” says Frédéric Penard, SOS MEDITERRANEE’s Director of Operations.

We will now be consulting with our shipowner, the maritime administrations and regulatory agencies to implement the measures and paperwork that guarantee a quick release of the vessel in order to continue to save lives at sea without further delay.