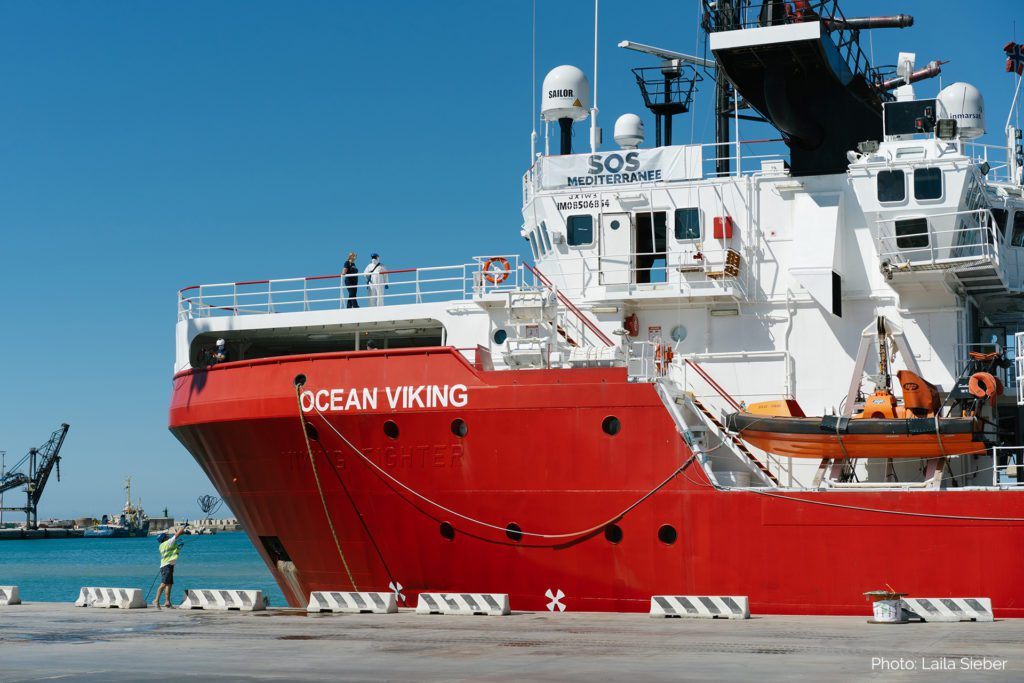 Today, following an eleven-hour inspection by the Italian coastguard, the Ocean Viking has been detained by Italian authorities in the port of Porto Empedocle, Sicily. SOS MEDITERRANEE condemns this blatant administrative harassment manoeuvre aimed at impeding the lifesaving work of NGO ships.

The main ground for detention was notified by the Italian coastguard as follows: “the ship has been carrying more persons than the number certified according to the Cargo Ship Safety Equipment Certificate”. Over one year of being chartered and operated by SOS MEDITERRANEE, the Ocean Viking had already proven she was responding to high safety standards more than a ship is usually asked for. It is beyond our understanding why remarks challenging the ship safety are made now, while the ship status has remained unchanged throughout four inspections, including two recent ones by the same Italian coastguard, and while there have been no changes in the relevant safety regulations with regards to what is now being challenged.

“The Ocean Viking’s Norwegian shipowner, together with SOS MEDITERRANEE as a charterer, have always respected and guaranteed a maximum level of safety for the crew and survivors onboard the vessel. What is clear to us now is that, over the past three months, the same argument over safety has been systematically used by Italian authorities to detain four NGO ships conducting Search and Rescue operations in the Central Mediterranean. Meanwhile, why wasn’t safety more of a concern to maritime authorities when, earlier this month, the Ocean Viking had to wait 11 days for a port to be assigned and while a State of Emergency had to be declared onboard?”, says Frédéric Penard, SOS MEDITERRANEE’s Director of Operations.

Operating in the Central Mediterranean, by nature, entails being faced with repeated situations of distress with a potentially large number of people in imminent danger at once (generally 50 to 200 people). Over the past decade, the Italian coastguard have themselves rescued several hundreds of people at once, sometimes within just a few hours. This is indeed the reality of the large-scaled humanitarian crisis unfolding in the Mediterranean. As a matter of fact, when rescuing people at sea -as per any ship masters’ duty to assist people in distress, the Ocean Viking does have to carry more people than specified in the paperwork of the vessel. This stems from the very nature of emergency and distress situations. However, it is of utmost importance to recall that the people we bring to temporary safety on board the Ocean Viking are, according to maritime law, to be considered as survivors, people rescued from a situation of acute distress at sea, and are never to be considered as passengers. Defining them as such is a disproportionate interpretation of the maritime legal framework we operate in and is a grave disregard for the situation the multiple unseaworthy boats we had to rescue from perilous situations over the past four years were in. This interpretation is of grave concern to a professional civil SAR organisation such as SOS MEDITERRANEE. In fact, relevant international maritime regulations specifying minimum standards for the construction, equipment and operation of ships, such as the SOLAS Convention, establish that shipwrecked persons who are on board in consequence of the Master’s duty to rescue, shall not be taken into account when verifying the application to a ship of any of the Convention’s provisions (SOLAS Article IV (b)).

As a result of a systematic administrative harassment NGOs are subjected to, there are barely any dedicated rescue ships currently available to conduct SAR operations in the Central Mediterranean. Meanwhile, people continue to flee Libya, especially as summer weather conditions allow, and boats keep being reported in distress in the Central Mediterranean. Bodies can be observed floating in the middle of the sea.

“There is a clear pattern being excessively and abusively applied in a continuous administrative harassment of NGOs, one whose only aim is to prevent lifesaving activities from filling the void left by European States on the matter. But stopping the ambulance will not prevent the wound from bleeding”, adds Frédéric Penard.

The Ocean Viking used to be certified as a standby/rescue vessel and operated as such under the strict legal framework of the Norway and UK maritime industry. At the time, the ship, like any other rescue vessels operating in one of the maritime sectors requiring the highest safety standards, was not requested to attain some of the features that Italian coastguard now considers grounds for detention. Since being chartered by SOS MEDITERRANEE, within a one-year timeframe, the Ocean Viking has undergone and passed three Port State Controls (PSC) – inspection regime for countries to audit foreign-registered ships in ports other than those of the Flag State – including one in Poland before starting her mission in the Central Mediterranean in July 2019. According to her Ship Risk Profile (SRP) – a system determining the level of priority for a ship inspection, the interval between inspections and the scope of such inspections – the Ocean Viking is rated as a Standard Risk Ship. As such, she would be normally due for periodic inspections every 10 to 12 months after the last inspection in the European region of the Paris Memorandum of Understanding (Paris MoU) – an agreement signed by 26 European countries and Canada, to implement a harmonised system of Port State Control. Instead, the Ocean Viking was inspected through the PSC regime by the Italian coastguard on two instances (in September and November 2019), before the one conducted in Porto Empedocle today.

The first two PSC inspections in Italy, when the ship was thoroughly inspected for about 9 hours, detected only a few minor deficiencies which were rapidly rectified and were not grounds for detention. Surprisingly, despite these previous thorough inspections, as a result of today’s inspection, the Italian maritime authorities have considered some of the ship’s certificates and arrangements –which haven’t changed since the first inspection- to be grounds for detention this time.

After having conducted four rescues in the Italian and Maltese Search and Rescue Regions on June 25th and 30th, the Ocean Viking declared a State of Emergency following eight days of refusal by competent maritime authorities to attribute a Place of Safety for the disembarkation of 180 survivors which had led to unbearable psychological distress for some of the survivors. Eleven days after the first rescue and three days after the State of Emergency was declared, the Ocean Viking was instructed to disembark the survivors in Porto Empedocle, Sicily. The crew was then instructed to undergo a 14-day quarantine onboard the Ocean Viking, off Sicily. Following the sanitation of the ship, a Port State Control was then conducted by Italian authorities leading to the administrative detention of the vessel.