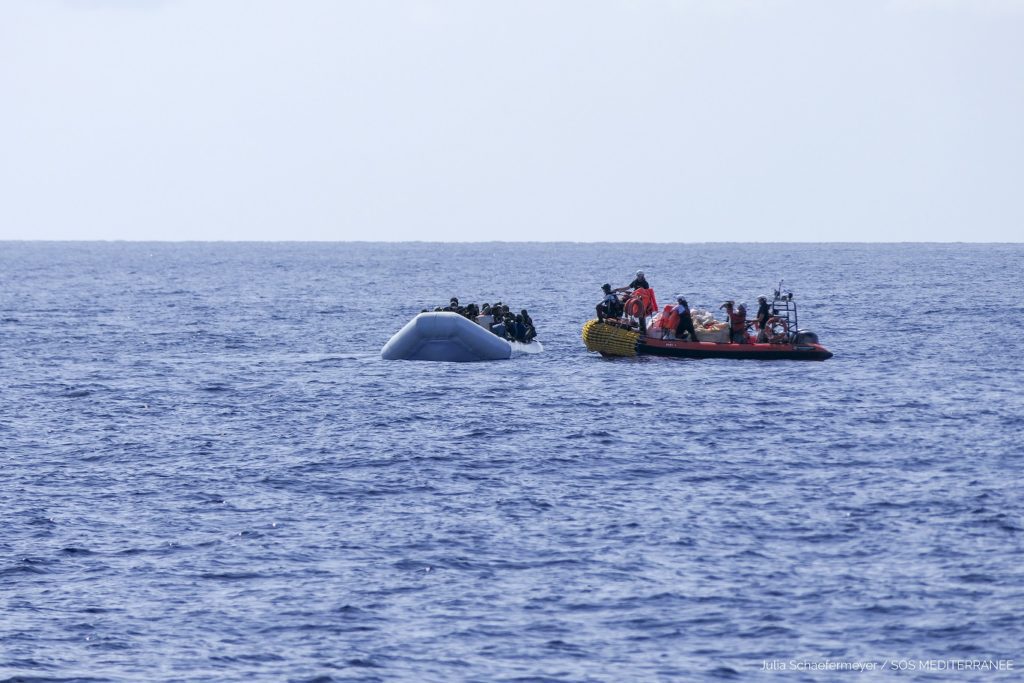 The first rescue occurred after the Ocean Viking was in copy of an email alert sent by the NGO Alarm Phone to the maritime authorities on the evening of 12 October. The boat in distress was drifting near Al Jurf offshore oil platform. The offshore oil platform called our ship to grant permission to enter into the restricted zone that spans 3 NM around the platform. Being allowed to get as close as 1NM to the platform, teams proceeded with the rescue operation saving 74 people, all males and including unaccompanied minors. The operation conducted at night was completed at 00:03h.

The Ocean Viking as per maritime law has requested a Place of Safety (PoS) to disembark the 176 rescued people, to the Libyan JRCC. As the Libyan authorities indicated Tripoli as a Port of Disembarkation, we kindly declined as according to international law and conventions no place in Libya can be currently considered a Place of Safety.

“While the Ocean Viking is heading north and most able to assist Rescue Coordination Centres (RCCs) have been notified, we strongly urge EU member states and the competent authorities to promptly assign us a Place of Safety so that the 176 rescued people can be safely disembarked. These, men, women, children have gone through a terrible and scary journey at sea; having them on the Ocean Viking aft deck is an emergency solution but a rescue can only be considered once they reach a shore when they can be taken care of.”, says Frederic Penard, SOS MEDITERRANEE’S Head of Operations.

“It is now the fourth time since the Ocean Viking started operations that we are waiting to be assigned a Place of Safety to disembark rescued people. EU governments have failed so far to set up a predictable disembarkation mechanism in accordance with maritime law. Ad hoc agreements cannot be the solution. We call upon governments to put an end to this unacceptable situation.” – Sophie Beau, co-founder and vice-president of SOS MEDITERRANEE.