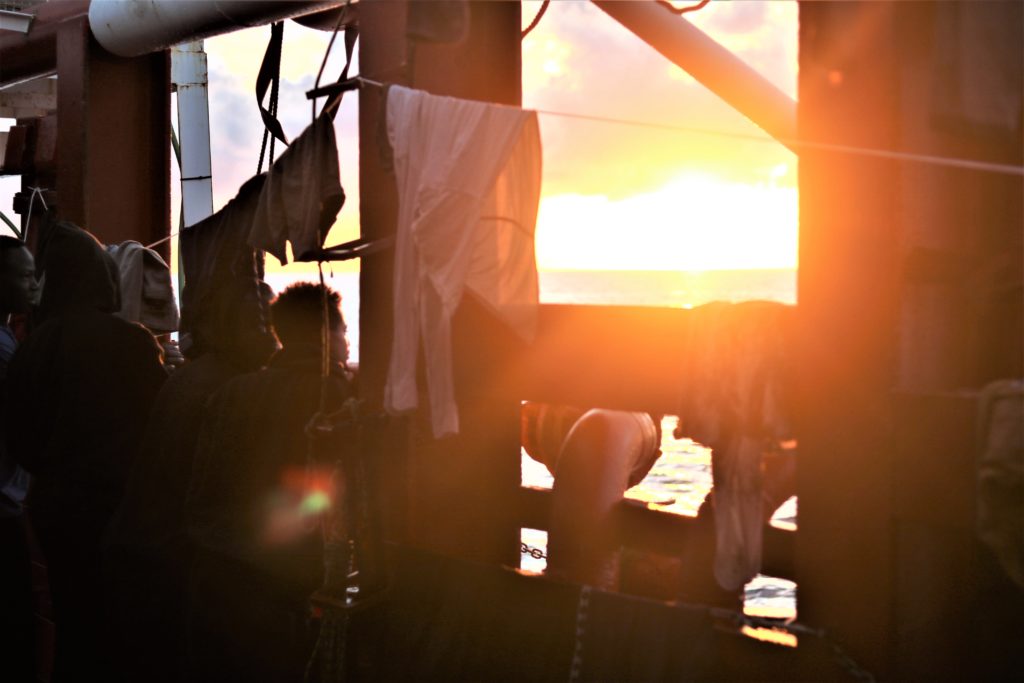 MARSEILLE – As winter sets in on the Central Mediterranean, 60 survivors are waiting for a port of disembarkation, five days after having been rescued in international waters off Libya by the Ocean Viking, a rescue ship chartered by SOS MEDITERRANEE in partnership with Médecins sans Frontières (MSF). SOS MEDITERRANEE calls on maritime authorities and a coalition of willing European States to urgently mobilise and facilitate the assignment of a Place of Safety to the Ocean Viking.

Following a challenging night rescue performed by the SOS MEDITERRANEE’s Search and Rescue team on November 28th, 60 people were rescued from an overcrowded and unstable wooden boat in distress 60 nautical miles from the coast of Libya. 19 minors are part of these survivors, including a 3-month-old baby and his 3-year-old brother. 17 minors are unaccompanied. Of the 60 survivors onboard the Ocean Viking, several have been treated by the MSF medical team for recent and significant traumatic injuries, reportedly sustained in Libya. One patient remains under close observation and will require immediate transfer to hospital at disembarkation. With the change in weather condition, rescued people are showing increased level of intolerance to basic sea-sickness treatment and most of those affected now require injections to control persistent vomiting.

The Ocean Viking sent a request for a Place of Safety for the 60 survivors onboard the ship to the Libyan Joint Rescue Coordination Center (LYJRCC) on November 29th. In the absence of an answer from the LYJRCC, the Ocean Viking sent a new request for a Place of Safety to the nearest maritime authorities in the area who would be able to assist -the Italian and Maltese RCCs- and is now in a standby position between Malta and Italy. Both RCCs have responded negatively so far.

“Men, women and children are again stuck on the deck of our ship after being rescued at sea. While they are being taken care of by the medical team, the weather will deteriorate over the coming days. This will unnecessarily prolong the needless suffering of survivors who have already suffered a lot,” said Nicholas Romaniuk, SOS MEDITERRANEE Search and Rescue Coordinator onboard the Ocean Viking. “It is urgent to find a solution for the survivors currently onboard and to establish the predictable mechanism of disembarkation that has been discussed several times by European leaders over the past months and has still yet to be implemented”.

In the meantime, on December 1st, the Ocean Viking received the information that 33 people rescued by a merchant ship off the coast of Libya on November 30th were reportedly brought back to Tripoli by the Libyan coast guard. This came after the vessel asked for the Ocean Viking’s assistance. As the Ocean Viking was not given authorisation to conduct a transfer, she was unable to take people onboard.

“The Ocean Viking teams have done their best to provide as much assistance to the survivors and the ship’s captain within a very complex context. The current situation at sea prevents people rescued and the vessels that save them from swiftly reaching a Place of Safety for disembarkation. Shipmasters are left in limbo while survivors, according to the testimonies taken onboard our vessels, remain terrified of being returned to Libya. Support needs to be given to shipmasters who carry out rescue to facilitate disembarkation of survivors in a Place of Safety as soon as possible”, said Frédéric Penard, SOS MEDITERRANEE’s Director of Operations. “Libya cannot be considered a Place of Safety for disembarkation. Everybody says this every day, including European leaders and their governments. The situation in the country is very well documented. But at the same time, European leaders refuse to accept responsibility for the coordination, including the designation of a Place of Safety, and they keep referring us back to the Libyan coast guard, which is unable to provide a Place of Safety. The European Union’s policies here are grossly incoherent. On the one hand, they clearly acknowledge that the situation in Libya is a problem, which clearly disqualifies Libyan ports as being a Place of Safety. But on the other hand, people continue to be sent back to Libya,” he added.

“The Ocean Viking has once again been a witness of the continued lack of coordination in the area, merchant vessels being left to rescue people at sea with little or no support for what happens after, and NGO vessels being hindered in their lifesaving work. People continue to flee Libya. The only two options they have is to be taken back against their will or die at sea. Impeding people from seeking safety and impeding lifesaving operations seem to be acceptable options by some decision makers in Europe. 743 people are known to be victims of these policies this year alone,” said Nicholas Romaniuk, SOS MEDITERRANEE Search and Rescue Coordinator onboard the Ocean Viking.