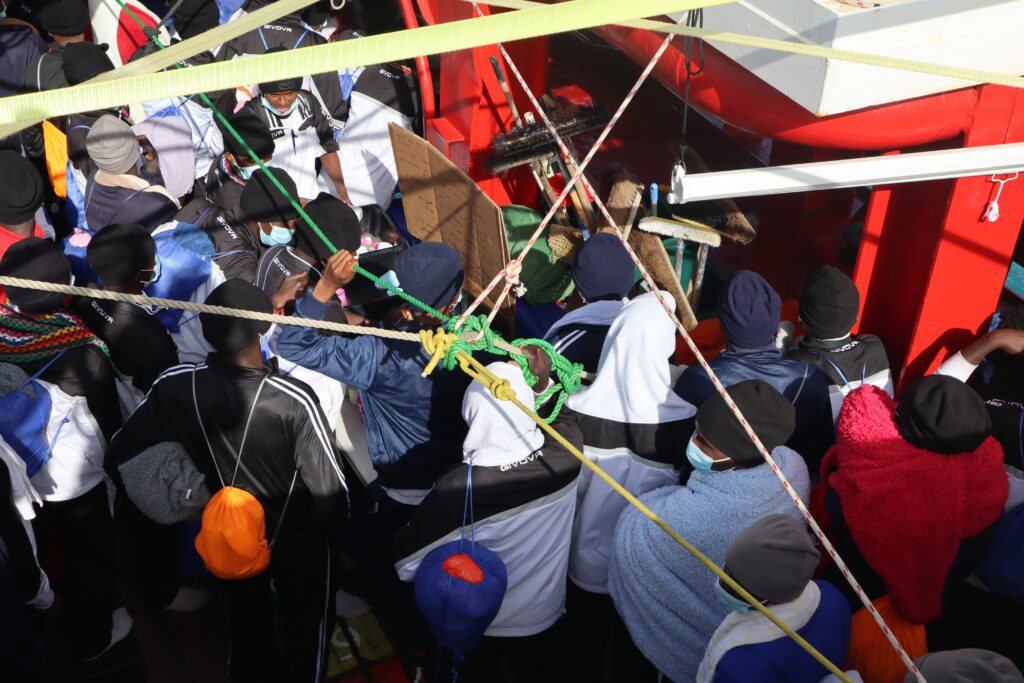 During the latest mission of the NGO ship Ocean Viking, almost 300 women, children and men were stranded onboard the ship for up to ten days, without authorisation to disembark in a Place of Safety.

This recent episode is one of far too many examples of shipwreck survivors being put in harm’s way while European States search for a solution for their disembarkation. “Maritime conventions state that maritime authorities have the obligation to assign a Place of Safety within reasonable time. Yet in the central Mediterranean, NGO ships conducting search and rescue operations spend increasingly long periods of time stranded at sea with survivors on board” says Sophie Beau, General Director of SOS MEDITERRANEE France.

These prolonged times at sea severely impacts the physical and mental well-being of those onboard who narrowly escaped death at sea These past two years, numerous urgent medical evacuations had to be conducted via patrol vessel or helicopter and several survivors jumped overboard NGO ships.

The ordeal experienced by the survivors on the Ocean Viking last month and by hundreds of people rescued by other civil search and rescue organisations show the pressing need for a predictable and sustainable disembarkation mechanism for people rescued in the central Mediterranean. The implementation of such a mechanism, based on European solidarity, has been presented as one of the priorities of the French Presidency of the Council of the European Union in early 2022. However, one month before the end of the French Presidency, negotiations are yet to reach any conclusions while the reality at sea is alarming.

If this distressing trend is not reversed, the humanitarian crisis in the central Mediterranean could once again worsen over the summer months, when better weather conditions lead to more attempts of the dangerous crossing of the central Mediterranean. SOS MEDITERRANEE calls on all EU Member States and associated States to fulfil their legal and moral responsibilities and support an efficient coordination of search and rescue operations in Central Mediterranean until the swift and dignified disembarkation of survivors. “European States gathered in upcoming Council meetings[1]  must agree on viable solutions to ensure the respect of maritime law and dignity of the survivors. Such prolonged periods of blockages reduce the number of assets available to provide life-saving services and could lead to more deaths at sea”, declares Sophie Beau. “Should the European Union fail to uphold the duties enshrined in maritime law, the humanitarian emergency in the central Mediterranean is likely to escalate over the next months”.

1 The European Justice and Home Affairs Council will gather on June 9th and 10th and the European Council, on June 23rd and 24th. During these meetings, they will especially work on a solidarity mechanism to disembark people rescued at sea, as a part of the French gradual approach of the EU New Pact on Migration and Asylum.

Recap of the latest mission:

In May 2022, the teams on board the Ocean Viking, – a rescue ship chartered by the civil maritime and humanitarian organisation SOS MEDITERRANEE in partnership with the International Federation of Red Cross and Red Crescent Societies (IFRC) – conducted its fourth lifesaving mission since the beginning of 2022. During this mission, 297 people have been rescued in four operations in the Libyan and Maltese Search and Rescue Regions, between the 19th and 23rd of May. Following the disembarkation of the rescued people, the Ocean Viking left the port of Pozzallo on May 31st and arrived on June 4th in the port of Marseille for crew change and to conduct ship maintenance operations.