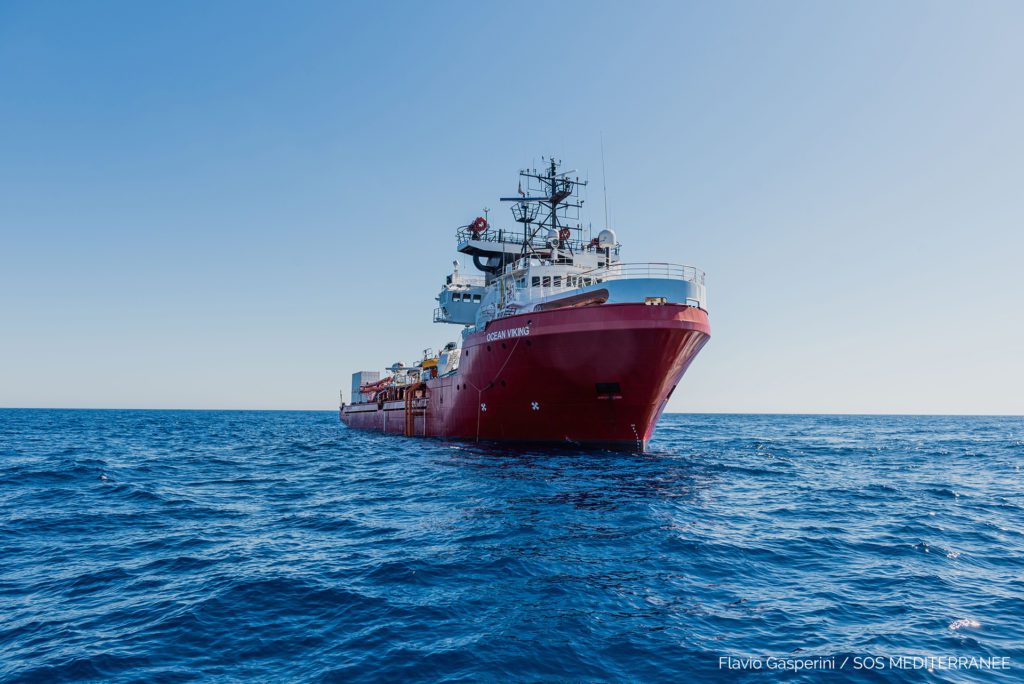 After seven requests for a Place of Safety to the relevant maritime authorities within the past week and six suicide attempts by survivors within 24 hours, the Ocean Viking has declared a State of Emergency over the vessel after the situation on board deteriorated to the point that the safety of the 180 survivors and the crew on board can no longer be guaranteed.

The Ocean Viking informed the Italian maritime authorities of this State of Emergency at 15h25 on Friday, 3rd. This is an unprecedented step in the history of SOS MEDITERRANEE, triggered first and foremost by the rapid deterioration of the mental health of some of the survivors on board, particularly among a group of 44 people that the crew on board the Ocean Viking requested a medical evacuation for today at 12h33, without any positive outcome so far. The 44 people who we requested assistance for are in a state of acute mental distress, expressed intentions to inflict harm both on themselves and on others, including members of the crew, and expressed suicidal ideas.

Two men jumped from the Ocean Viking yesterday and had to be recovered by our rescue team. Another three men intended to jump but were held back by other survivors and SOS MEDITERRANEE crew members. Early this morning, one adult male acted on his suicidal intent by attempting to hang himself. More have expressed suicidal ideas. Many of the survivors are showing signs of extreme mental fatigue, depression and acute agitation which has erupted into several physical fights among the survivors on deck and threats of physical violence to survivors, the crew and the vessel. Several survivors complain of decreased appetite, insomnia, and mental distress regarding what they have been through, mainly in Libya, and in the current situation, specifically not being able to contact their family for many days to inform them that they are alive. Two people have entered into a hunger strike in desperation at their situation this morning.

In addition to the acute psychological distress several of the survivors find themselves in, the deteriorating weather conditions pose an even greater threat to the lives of those who might try to reach shore by jumping off the Ocean Viking. The safety of the crew and the survivors is our utmost priority at every stage of our operations.

The concerning behavior and decline of mental health of some of the 180 survivors onboard our vessel are a direct result of the unnecessary extended stand-off at sea and lack of solution for their disembarkation in a Place of Safety. A ship at sea is not a safe place for survivors who have just endured a near-death experience on an unseaworthy dinghy in distress. Among the 180 survivors on board the Ocean Viking are 25 minors, 17 of whom are unaccompanied. One of the two women on board is five months pregnant.

One of the four rescue operations conducted on June 25 and June 30 took place in the overlapping Italian and Maltese Search and Rescue Regions, the other three took place in the Maltese Search and Rescue Region. There can be no doubt as to the responsibility for the facilitation of disembarkation. Maritime law is clear: a rescue is only complete when the survivors have reached a Place of Safety and such a place is to be provided by the relevant maritime authorities.

The first request for a Place of Safety was sent to the relevant maritime authorities in Italy and Malta a week ago today. This request was repeated six times since. The Ocean Viking has thus far received one negative answer from each of those authorities. No indication of a solution has been given.

We repeat our call to the relevant authorities and to all European Union Member States to urgently step up and join efforts to provide a solution for the 180 survivors on board the Ocean Viking. Their safety and that of our crew depends on it.