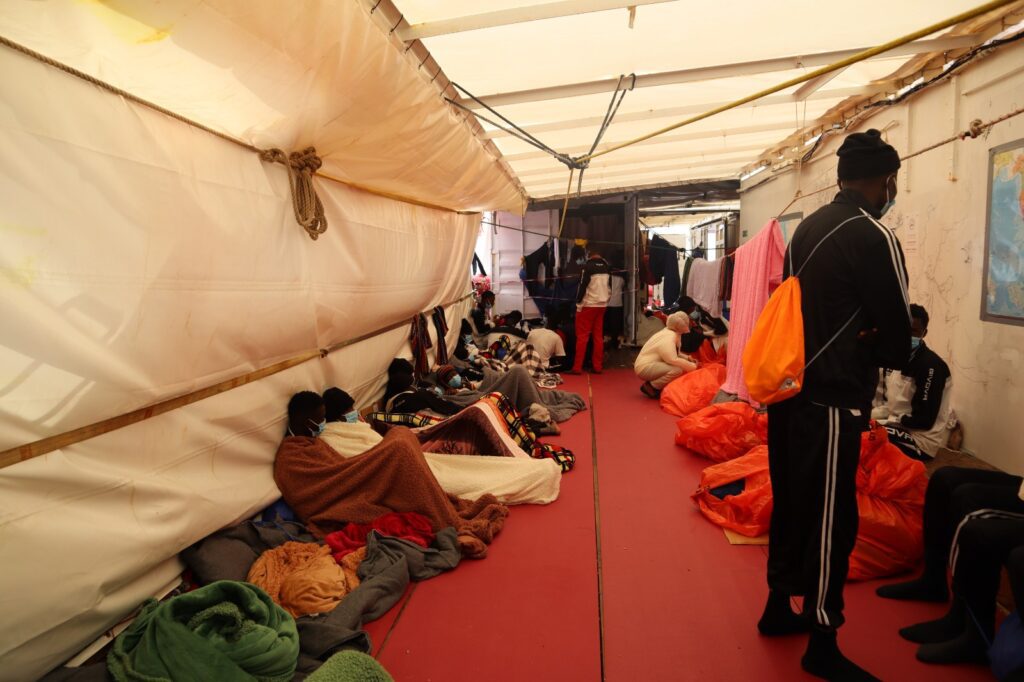 “After up to ten days at sea amid rough weather conditions, the 294 remaining women, children and men rescued in the central Mediterranean by Ocean Viking in four difficult operations are exhausted. Keeping survivors rescued from near-death at sea stranded on a rescue ship is disgraceful. SOS MEDITERRANEE and IFRC teams are doing their utmost to care for them and alleviate their added suffering, but a ship is only a temporary shelter. They urgently require to safely disembark and receive much need further assistance.

Last Monday, the sea state has resulted in over 75% of the survivors suffering from sea sickness. Most of them needed medication to mitigate further exhaustion. In an already vulnerable population, this hardship has further harmed their physical and mental well-being. In the afternoon of May 3, one of the survivors urgently needed to be evacuated to a hospital with a surgical capacity

After twelve requests for a place of safety, we are still left without option. We are witnessing how this unwarranted delay is exacerbating by the day the suffering and the psychological distress of people who already went through extremely traumatic events.

Women and children, the youngest of whom is only one year old, are among the survivors. There are 127 minors onboard who are travelling alone; they faced ordeals that no child should ever have to go through.

Many of the survivors rescued by the SOS MEDITERRANEE team on April 25 told us the harrowing account of losing twelve of their companions, who fell into the water and drowned while attempting to cross at night. A young man, whom we will call Inoussa to protect his identity, told our teams that he lost a friend in that tragic event. He said that this person was reassuring all those onboard the overcrowded rubber boat during their dire night-sea journey, advising to “stay calm” and “avoid panic” “We have three options “, said Inoussa’s friend to all those in distress just before the tragic event, “dying, being taken back to Libya, or finally reaching safety”. Inoussa concluded: “My friend was swept away by the first option, he died at sea.”

SOS MEDITERRANEE and IFRC teams are providing medical and psychological assistance to survivors around the clock. However, a vessel is not the appropriate setting to care for extremely vulnerable and traumatised people for a prolonged time. Many survivors described being subjected to extreme violence and abuse in Libya and on their migration journeys, in addition to their suffering at sea. Inoussa, rescued on April 25 by Ocean Viking, shared his despair yesterday morning: “I feel sick to see my friend struggling with seasickness, to see the women and children suffering from this prolonged waiting period at sea. The waves, the same emergency food every day, sleeping on deck….”  All survivors onboard feel the urgent need to disembark.” The longer the wait, the more despair sets in and the more hope fades away.” said Inoussa.

We urge the appropriate authorities to end this prolonged standoff and fulfill their legal obligation to designate a Place of Safety without further delay.

Maritime law, such as the SOLAS regulation imposes “upon Governments an obligation to co-ordinate and co-operate to ensure that masters of ships providing assistance by embarking persons in distress at sea are released from their obligations” and to ensure that “in every case a place of safety is provided within a reasonable time.” Survivors have been awaiting at sea for over a week following their rescues, this cannot be considered as reasonable. Once again, the EU member states are failing to guarantee a coordinated regular mechanism of disembarkation to assist people in distress at sea.”

The teams on board the Ocean Viking, – a rescue ship chartered by civil maritime and humanitarian organisation SOS MEDITERRANEE in partnership with the International Federation of Red Cross and Red Crescent Societies (IFRC) – rescued 295 people in distress in the Central Mediterranean, in four difficult operations in international waters off the Libyan coast, performed between April 24 and April 27.

There are 122 unaccompanied minors among the 295 survivors stranded on board the Ocean Viking. Most of the survivors suffered from hypothermia, seasickness, and exhaustion. After going through tragic experiences during their journey and at sea, many of the rescued people present with signs of trauma and psychological distress and need further support.

Visit our Logbook for detailed information on the mission

SOS MEDITERRANEE is a European maritime and humanitarian organization operating in response to the deaths in the Mediterranean and the failure of the European Union to prevent these deaths. Founded by citizens in May 2015, SOS MEDITERRANEE team rescued 35.333 people since the start of its operations at sea.