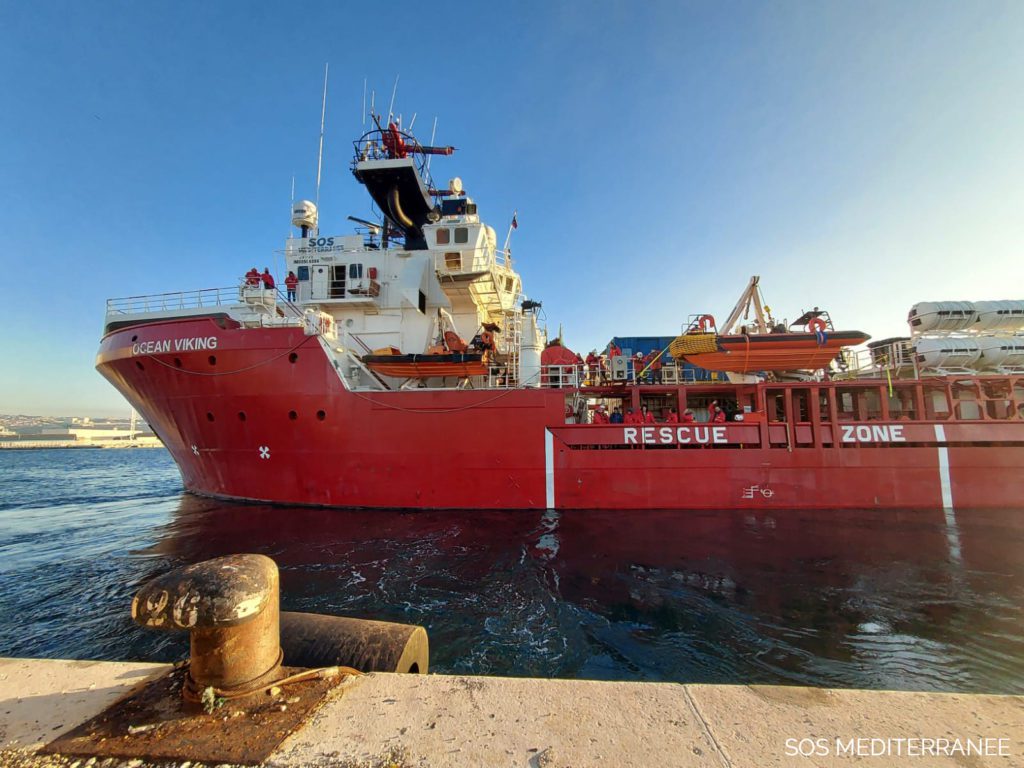 This morning, the rescue ship Ocean Viking of European search and rescue association SOS MEDITERRANEE is leaving Marseille, France, headed for the central Mediterranean for the first time in six months. This first mission of the year comes after five months of costly efforts to release the ship from an administrative detention imposed by the Italian authorities on July 22 on the basis of new interpretations of ship safety requirements. In 2020, the lack of rescue capacity became ever more apparent. It was a devastating year in the central Mediterranean with more than 700 reported deaths and a high probability that more deaths went undocumented. SOS MEDITERRANEE is relieved to resume lifesaving operations this month, while reiterating the crucial need for a return to efficient and lawful State-led rescue coordination.

“While we are on our way back to the central Mediterranean for the first time in months, we all have in mind what a dreadful year 2020 has been for people caught in circles of abuse in Libya and those attempting to flee by sea. With the COVID-19 pandemic came a renewed “closure” of ports while people continued having to risk their lives at sea to reach safety. Merchant ships carrying out their duty to rescue were stranded at sea for weeks while responsible authorities refused to provide a solution to disembark rescued people. In June, the Ocean Viking, left without instructions for days, had to declare a state of emergency on board the ship when the uncertainty and the lack of perspective pushed survivors past their breaking point. Repeated lengthy delays from maritime authorities in rescuing people in acute distress as well as organised pushbacks of survivors to Libya occurred in breach of international law. Over 11,000 people were forcibly returned to Libya and its detention centres. Six NGO ships have been blocked in a systematic manner leaving a deadly black hole in the central Mediterranean. At least 779 women, men and children died or went missing – counting only the shipwrecks we know of – with barely any witnesses. This is disgraceful and needs to come to an end”, says Sophie Beau, co-founder and vice-president of SOS MEDITERRANEE. “The Ocean Viking is setting sail with a team prepared for the worst, having to face life and death situations in the middle of the open sea. Unnecessary rescue delays and prolonged standoffs at sea put human lives at risk. A return to respect for maritime law and genuine European solidarity with coastal states is the only way to prevent more tragedies”.

Following the release of the Ocean Viking from a 5-month detention by Italian authorities on December 21, the ship sailed from Augusta, Sicily, to Marseille, France, to restock and embark the SOS MEDITERRANEE crew after a ten-day self-isolation period. SOS MEDITERRANEE has implemented strict pre-boarding COVID-19 prevention protocols for the twenty-two medical and rescue team members, nine members of the ship’s crew and two invited reporters covering the current mission on board. All have been tested negative for COVID-19 several times. Strict prevention and mitigation protocols will be applied at all times throughout the mission at sea. In the past weeks, the rescue and medical teams have been trained and the ship equipped to continue to respond to the humanitarian crisis unfolding in the central Mediterranean in the safest sanitary conditions possible. In the coming days, on their way to the central Mediterranean, the teams will perform all the trainings and drills necessary to perform search and rescue operations in the most professional manner.