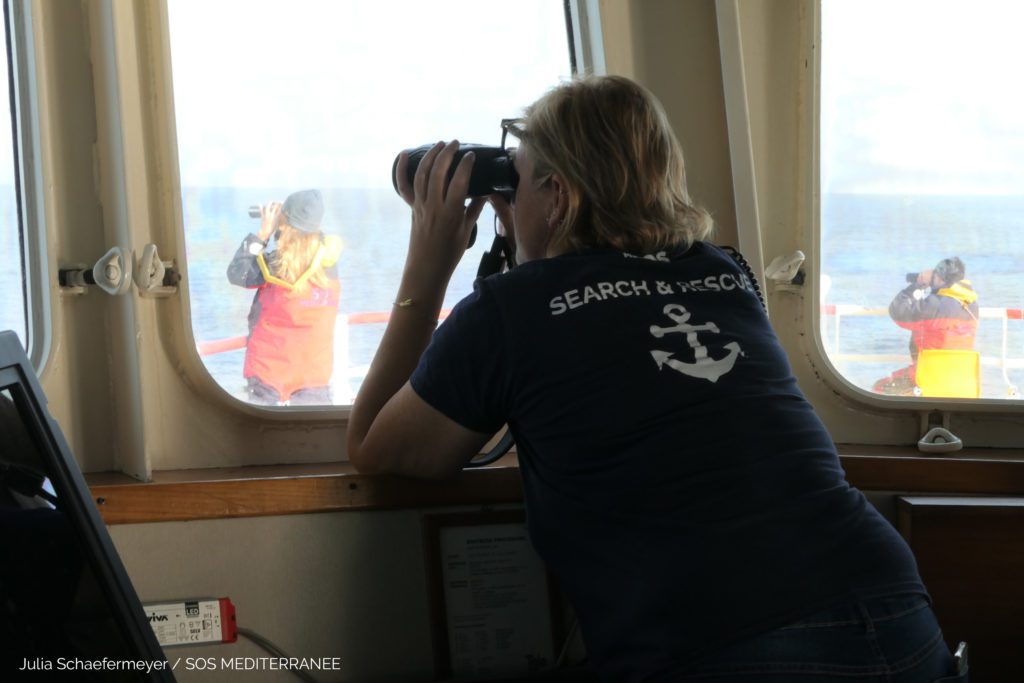 Three years ago, on 3 February 2017, the European governments signed the Malta Declaration that gave path to the empowerment of the Libyan Coast Guard in the Central Mediterranean. Eventually, a Libyan Search and Rescue Region and Rescue Coordination Centre were established and financed by Europe. While the Italian maritime authorities were previously assuming responsibility for the coordination of distress cases in the Central Mediterranean international waters, it was now the Libyan Coast Guard officially in charge.

“Foundation for a massive breach of international law”

Since then, SOS MEDITERRANEE has repeatedly witnessed how the Libyan Coast Guard intercepted at high seas and forcibly returned rescued people to Libya. And whenever a ship carries out a rescue in the area, the Tripoli Rescue Coordination Centre instructs to take the survivors back to Libyan shores, although maritime and international law strictly demand that people are being brought to a Place of Safety, which Libya is not at present. Furthermore, the European civil sea rescue organisation, has observed on several occasions how the Libyan Coast Guard acts in an unpredictable and unreliable manner, thus further endangering human lives.

“With the Malta Declaration, the European Union has laid the foundation for a massive breach of international law, financed by European taxpayers’ money,” Sophie Beau, International Vice-President of SOS MEDITERRANEE, sums up. “The EU must stand by its values and urgently set up a comprehensive sea rescue operation that is worthy of its name, abides by maritime law and save lives at sea!” demands Beau.

According to the Institute for International Political Studies[1], a total of around 39,000 people have been brought back to Libya between March 2017 and today. Compared to the total number of arrivals in Italy and Malta that have continuously dropped throughout the past years, the share of those being intercepted and unlawfully returned has significantly increased.

“While the European Union pulled back from saving lives at sea over the past years, they simultaneously financed, trained and equipped the Libyan Coast Guard to intercept people fleeing the country. They are returning them to a cycle of violence and abuse in war-torn Libya. Rescued people on board endlessly report to us shocking experiences of torture, rape, slavery and even executions, and most of the survivors are hurt or traumatised. One of the core elements of this inhuman policy is the Malta Declaration that was signed by European Heads of State in February 2017,” determines Sophie Beau, International Vice-President of SOS MEDITERRANEE.

Lack of Search and Rescue coordination in the Central Mediterranean

SOS MEDITERRANEE launched its rescue operations in 2016, first with the rescue ship Aquarius and lately with the Ocean Viking since August 2019. The civil sea rescuers were involved in numerous search and rescue emergency cases in which the Libyan Coast Guard did not answer calls and emails requesting coordination, and did not provide life-saving information to allow vessels such as the Ocean Viking to assist boats in distress.

Few days ago, according to UNHCR[2], more than 500 people were in urgent need of help in the Central Mediterranean. Most rescues were not coordinated by authorities. While the Ocean Viking alone was involved in five consecutive rescues within less than 72 hours, the Libyan Coast Guard communicated their lack of capacity to launch rescue operations.

“The events of this weekend have once again shown there is a complete lack of coordination for those too few assets who are willing to render assistance as all ships are bound to. The chances of finding a boat in distress without any guidance nor information from the competent authorities are very slim. On Sunday, we responded to two alerts separated wide 120 Nautical Miles, despite already having 223 survivors on board from three challenging night rescues. Even though all vessels in the area were alerted, we knew that the people on these boats in distress were very unlikely to be rescued without our involvement. After a dedicated search we finally managed to locate and rescue both boats, bringing the total to 407 people safely onboard the Ocean Viking.

With no stabilisation of the situation in Libya in sight, people will continue to attempt the perilous crossing because it is their only way out of systematic abuses. Without a coordinated effort to increase Search and Rescue capacity guided by solidarity among EU Member States, we fear for their lives,” says Sophie Beau, International Vice-President of SOS MEDITERRANEE.

“For how much longer will the EU empower and finance the Libyan coast guard? We are talking about thousands of men, women and children dying at sea while EU States continue to finance a Libyan maritime coordinating body that lacks capacity to achieve such a mandate and can in no way offer a Place of Safety. Taking people in distress at sea back to a place where they are not safe and instructing other vessels to do the same is a breach of international and maritime law”, says Sophie Beau, International Vice-President of SOS MEDITERRANEE.

SOS MEDITERRANEE reiterates the immediate need for a competent and efficient search & rescue coordination by maritime authorities and for the resumption of a capable and dedicated EU search & rescue operation. Above all other considerations, the first priority of European policies must be to ensure that lives are saved in the Central Mediterranean Sea.

[1] IPSI: Migration in the Mediterranean. All the numbers