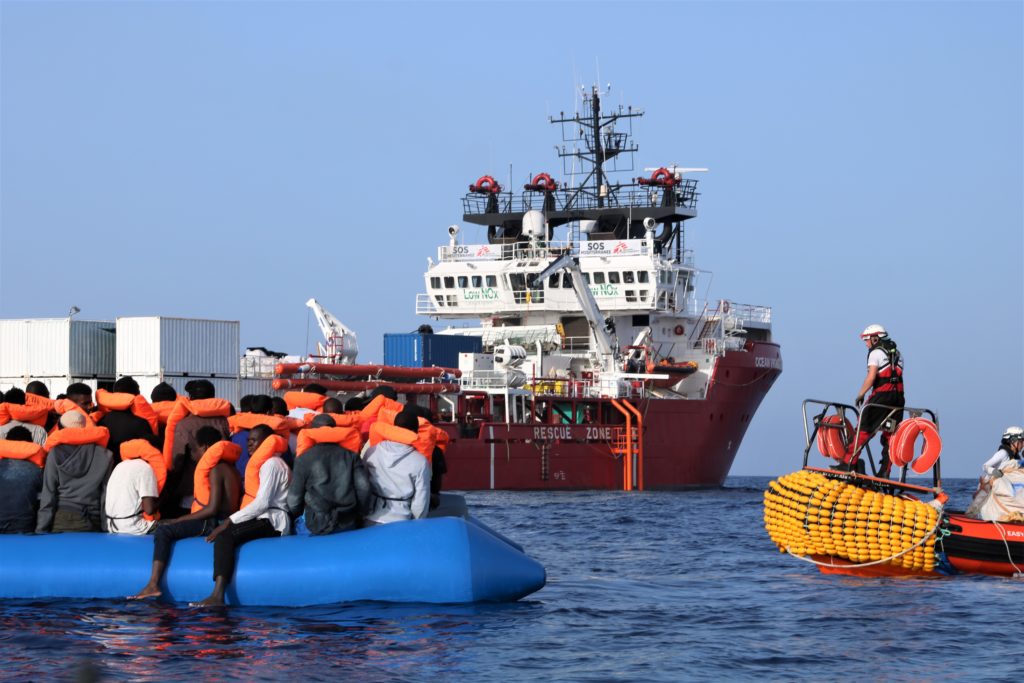 For the second time in a week, the Italian authorities open a port to vulnerable people rescued in the central Mediterranean by a humanitarian rescue ship. SOS MEDITERRANEE expresses its relief and welcomes the Italian decision which puts an end to five days of unnecessary suffering, although international and maritime law states people rescued at sea must be promptly disembarked in a Place of Safety.

In within the past 3 weeks of being at sea, the Ocean Viking has been engaged in several search and rescue operations. Despite duly informing the Joint Rescue Coordination Center (JRCC) of Tripoli of the potential distress cases occurring in the Libyan Search and Rescue Region, the teams onboard the Ocean Viking did not manage to get any guidance from this competent authority created in summer 2018 and recognized by the International Maritime Organization. Among her searches, between the 17th and 18th September, the Ocean Viking spotted 3 boats in distress via binoculars and had to carry out all rescues in the complete absence of coordination by the Libyan JRCC.

Moreover, following a request for the designation of a Place of Safety sent by the Ocean Viking to the JRCC Tripoli on September 17th, the Libyan maritime authorities replied on September 18th assigning the port of Al-Khums. “In light of the clear guidance and international law provisions, we are not in a position to head towards a Libyan port, which cannot be considered as a place of safety. The rescued people onboard our ship are fleeing from this country and in serious risk of being victim of abuses, tortures, exploitation and sexual violences if they were to be returned to Libya”, stated Nicola Stalla, Search and Rescue Coordinator onboard the Ocean Viking. Hence, the Ocean Viking had to decline and request a place of safety that meets the requirements of applicable international and maritime law.

On Thursday, September 19th, SOS MEDITERRANEE and MSF’s teams carried out a fourth operation, rescuing 35 people from a wooden boat, within the Maltese Search and Rescue Region (SRR) under the coordination of Maltese maritime authorities. The day after, following instructions of the Maltese Rescue Coordination Center, these 35 survivors were transferred from our ship to a Maltese military vessel to be promptly and safely disembarked in Malta as maritime law provides.

The current practice of individual European states negotiating the resettlement of people rescued at sea on a case-to-case basis for days before allowing them to disembark is unsustainable and in clear contradiction to international and maritime law. With no other humanitarian rescue ship currently present in the central Mediterranean while people continue to face danger at sea, it is not acceptable that SOS MEDITERRANEE and MSF are prevented from fulfilling their lifesaving mission.

“There is a complete inadequacy of Search and Rescue capacities in the Central Mediterranean”, urged Stalla. “We don’t know – and we will never know – how many people actually disappeared into the waters without witness. It is unacceptable that the people who have survived this very dangerous crossing, being rescued from their unseaworthy overcrowded boats by non governmental ships, are stranded at sea for days and sometimes weeks before finding a Place of Safety. It is urgent that a European agreement is found to put an end to these repeated stand-offs”, he added.

SOS MEDITERRANEE is aware of the willingness of a coalition of EU states to endorse a European Union-coordinated approach to receive people rescued at sea. The Ministers of Interior gathered in Valletta today have an opportunity to show solidarity with coastal countries and establish a coordinated, predictable and sustainable disembarkation mechanism, fully complying with maritime and international law. It would be a first step to improve the situation in Central Mediterranean where people lives are constantly endangered because of a general failure of the Search and Rescue system.