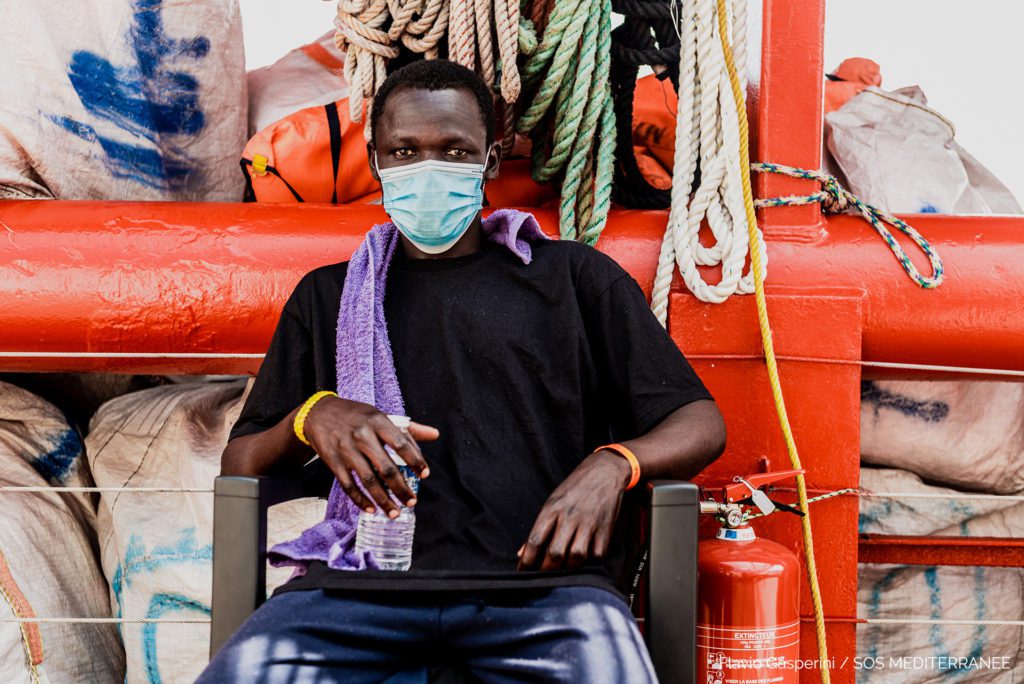 Emmanuel was rescued by the Ocean Viking on June 30th  2020, after spending four days and three nights lost in the Central Mediterranean, trying to flee Libya. He was on an overcrowded wooden boat along with 46 other people, lacking food, water and fuel. Emmanuel was very weak when he was brought to safety on the Ocean Viking.  In the long days of waiting for a Place of Safety to be granted to the 180 rescued people on board our vessel, this father of two told us part of his story.

“We cannot sleep well, you know. Every night, we think of our family back home, our uncertain future and what happened to us in Libya and at sea. On our small boat, we were completely lost at some point. I realized that I had completely lost control over my life. It wasn’t in my hands anymore. I thought we would die there.  Alone.”

“There is no justice, only lots of injustice in Libya.”

“In Libya, I learned to be strong and vigilant: strong, physically, to be able to work in constructions which was the only option we had; strong, mentally, because the weakest die over there; and vigilant to avoid being taken to prison [detention centres]. You can be cheated in so many ways in Libya. If you are a foreigner, whoever you are, you can be kidnapped anytime. In this country, you have no control over your life. Killing people in Libya is nothing. If someone kills you, no one asks that person anything about it. There is no justice, only lots of injustice in Libya. You can be arrested by ’private police’ also, because with the war and the chaos, there are different powers in place in different areas. ’Asma boys’, for example, wear uniforms that look like police uniforms, they have guns as well, but they don’t take you to any legal place. They kidnap people for ransom. All they want is money.

These are some of the reasons why we call Libya “hell on earth” but it’s not the only ones.

We also are victims of forced labour. For example, after months of hard work in constructions, the landlord paid my employer and then this man told me he only received a small part of the money, to justify not paying me. I was promised 40% of 12,000 Libyan dinars (4,800 Libyan dinars = 3,048 euros). But in the end, I was not given one dinar. This happens to so many people in Libya. But they only tell you that when the work is almost finished. You cannot trust anyone in this country.

I arrived in Libya in February 2020. Less than a month later I wanted to get out of there. But fleeing from this country is also almost impossible.”

“We thought it was a four-hour journey, with a captain and a good boat”

“Before going on the boat, I knew I had to leave Libya by all means. I had no space in my mind to think about how dangerous this journey was. I was already in danger. I thought it was a four-hour journey, with a captain and a good boat. When the evening came, we were eventually put in this wooden boat with way too many people on it and no one knew how to find the way to Europe, but we had no choice anymore. We couldn’t go back to hell on earth.

The first day, we ended up nowhere, in the middle of the sea, and the waves started to be rough. The boat was turning around: not going forward, not going backwards. When the second day came, I realized the sea was bigger than we thought it was. We’d already gotten lost several times. Sometimes, we would see some ships in the horizon. After sailing for hours, we would see the same ships again, in the same place. This is when I realized we were completely lost. At the time, we had no more food. The waves were making the boat swing from one side to another side. So we decided to sleep a little to try and gather our thoughts. It was the first few hours of sleep we took in 48 hours and they were not really effective, but our bodies absolutely needed it. We faced a lot of challenges. Sea water also splashed to my face and legs. My skin started to itch.

We spent four days at sea searching for the road. On the fourth day, we realized we only had one barrel of fuel left, a small one, and the engine stopped. It broke. By then, we thought we had lost our lives. Some of us started praying. We decided to call for rescue. From around 6am to 4pm, we received no response. Then, we saw a Tunisian fisherman going back to port after work. We asked him for help. He gave us food, and water, enough for everyone. He also gave us the piece we needed to repair our broken engine. We fixed the problem and started our new journey, again. At about 6pm, we saw a plane [Seabird of the NGO Sea Watch] flying over our boat and towards your ship and later we saw your rescue team. So, we decided to stop and see what was going to happen. Some of us were afraid you would harm us. Me, at that time, I was too tired and confused to think. If we had continued our way, I deeply felt that I would have died. I felt that I wouldn’t see my baby girl again. But I will. Now, I know that I will see her, my boy and my wife again. One day.”

“I left Ghana because I had no other choice.”

“There is a lot of hardships in Africa. We face many challenges. There are wars, corruption everywhere, and we have a huge rate of unemployed graduates. A lot of graduated people can testify. I am one of them. I am an IT engineer. People fleeing African countries are not fleeing for a dream. I left Ghana because I had no other choice.

I learned to live on my own in my home country. When I was growing up, in high school, I was in second position in my class. I dreamt of becoming a lawyer because I strongly believe in justice, but it was too expensive for me. I couldn’t even pay to take the exams to enter a law school and in 2019, only 2% of the students passed their entrance exams! When I finished high school, I worked as a teacher in private schools and as a secretary in NGOs to pay IT university  but in the end, it was for nothing. I couldn’t find any position.”