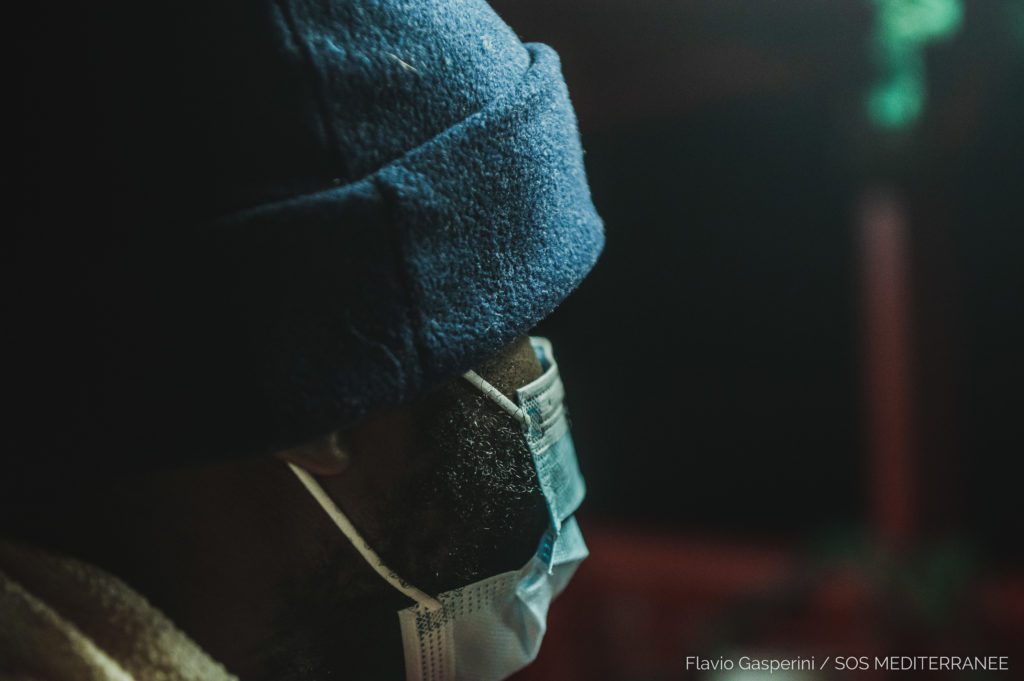 Aboulai* is 29 years old, originally from Benin, and has a degree in chemistry, biology and geology. On 27 April, the crews of the Ocean Viking rescued his inflatable boat in international waters, 32 nautical miles off the Libyan coast. He agreed to share his life story with us, on board the Ocean Viking, before being allowed to disembark at the port of Augusta (Sicily) on 1 May, alongside 235 other survivors.

At the time of enrolment for a Master’s degree in applied entomology at the University of Abomey-Calavi (UAC) in order to fulfil his dream of becoming a medical entomologist, Abulai is unable to complete his registration, due to a lack of funds.

He therefore has to return home, to his village, to work in the field and save money for his registration. This is when he witnesses a bloody village feud. Of Nigerian origin, his family is accused of being behind the clash. Aboulai flees his country with his father’s motorbike, which he later sells.

He will walk for a long time to reach Algeria. “I spent the night under a dump truck,” he says, “then I was able to reach Tamanrasset, in the south of Algeria, before paying 230,000 FCFA (about 350 euros) to reach Libya. It was my older brother who sold his land so that I could leave. The adventure was not what I had in mind. A friend told me about the Mediterranean Sea to reach Europe and do good studies: I always dreamed of being a medical entomologist.”

Once in Libya, Aboulai is disillusioned: he starts as a bricklayer, but earns very little. He then works in the field, but this time he does not receive any salary. When he asks to be paid, he is threatened to death. Aboulai ends up running away: “It was a choice between life and death, but I didn’t tell anyone about it, except my older brother.” He paid 350,000 CFA francs (about 530 euros) for the crossing, but never saw the face of the Libyans who received the money: “we always go through an intermediary,” he says.

Before departure, Aboulai is placed in an enclosed space with other would-be exiles. “If we made too much noise, we were beaten like animals.” One night, they are informed of the up-coming departure: “the departures are only done at night”, Aboulai explains. Those who can afford it buy a life jacket (editor’s note: these jackets are not approved and tend to sink once they come into contact with water): life jackets cost an average of 200 Libyan dinars (about 36 euros) in the camps where they are housed, compared to 80 Libyan dinars in town. The inner tube used as a buoy costs 100 Libyan dinars, compared to 20 in the city.

“We left at around 11pm, in the night. People were afraid when they saw the sea, but we were beaten to get on board. We were given five jerry cans of petrol and no bottles of water,” says Aboulai. “The next morning, we were rescued.”

Today, Aboulai compares his stay on board Ocean Viking to a “paradise on earth, because Libyan life is more than hell: there is insecurity, racism, rape and a lot of nastiness. We have seen it all there. I am very surprised, because here we are cherished. We are safe, and we have medical care. I feel at home.”

Aboulai says that his first objective when he arrives on land will be to contact his parents, to check on them: “My parents are very poor and my mother is diabetic,” he says. “I don’t know if she is still alive. She has always supported me morally and today she is my only hope.”

*The name of the survivor has been changed to preserve his anonymity.