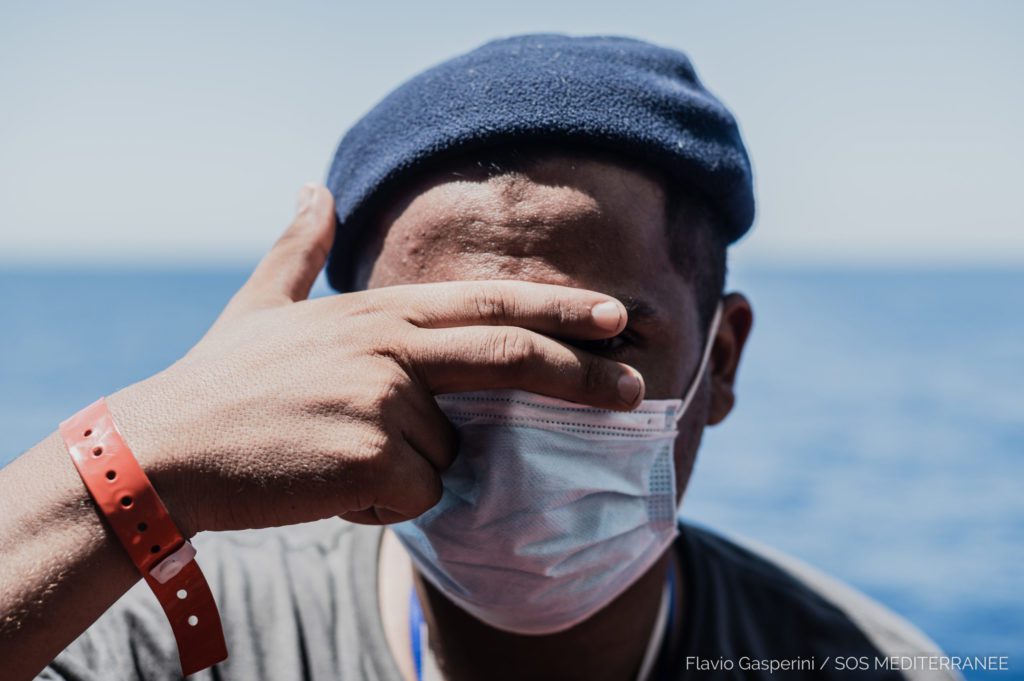 Zidane*, 31 years old, from Yemen, was one of the 555 people rescued by the team of the Ocean Viking between July 31st and August 1st. Zidane was rescued from a wooden boat in distress along with 105 other survivors after spending 17 hours in the cargo hold of the boat, unable to sit up, crammed together below deck with around 24 other people.

“I first fled to Djibouti on a livestock carrier, it took almost twelve hours. I remember that it was May 1st, 2015.”

“There were many Yemeni refugees in Djibouti at the time. Djibouti is so close to Yemen, we could hear the bombs from the refugee camp. We were living in constant fear. The children tried running away because they thought the camp was being bombed.”

“The camp wasn’t safe. There was no real care, no work, no bathrooms, wild animals roamed the camp at night. I saw people go insane before my eyes. One man set himself on fire in front of me, he never received treatment for his wounds. He burnt himself again shortly after and died.”

Zidane’s journey took him from Djibouti to Ethiopia, Sudan, the United Arab Emirates, back to Djibouti, and, finally, to Libya. He explains he tried applying for a visa to travel to Libya but got rejected.

“If I start telling the stories of what I witnessed, I will never stop. I was in jail in Ethiopia for 65 days because I was mistaken for a smuggler, and I saw people with torture marks there. I cannot describe all that I saw. While I was fleeing from one place to another, I always listened to the stories of everyone who wanted to share, because I am a writer and remembering people’s stories was all I could do for them, but I cannot start thinking about myself.”

“Sometimes you had to pay a smuggler just to get from one place to another within the same country. I was tortured, beaten and humiliated by each smuggler on my journey. It’s the same with each smuggler, they just do it in different ways.”

“When we got on the boat [in Libya], the smugglers hit everyone. They had guns bigger than my arm. Talking about it now, I don’t know whether I should laugh or cry. It seems so unreal, like a video game.”

“We ran out of water and fuel quickly. We didn’t have a satellite phone, we had no way of contacting anyone. At one point, we saw an empty boat in the middle of the sea, maybe you had rescued the people, maybe they were taken back by the Libyans. On the empty boat, we saw small water bottles and a fuel cannister. So we continued, and we just prayed and prayed, and thank God you found us.”

“I was born into the immigration life. My Dad fled Iraq with me when I was little. I always say, a fast death is better than a slow death. What happens to us, all these years of having to flee from one place to another, that’s a slow death. I had to make a choice. I could either die at sea or get a chance at a new life.”

“Many people lost their hands, their legs, their minds, their lives. I still have all my parts, I still have my life. When I hear other people’s stories, I start feeling for them. I don’t have these feelings for myself. Yes, I am a writer, but I want to help people in a more practical, tangible way.”

***
The name has been changed to protect the identity of the survivor.
Photo credit: Flavio Gasperini / SOS MEDITERRANEE