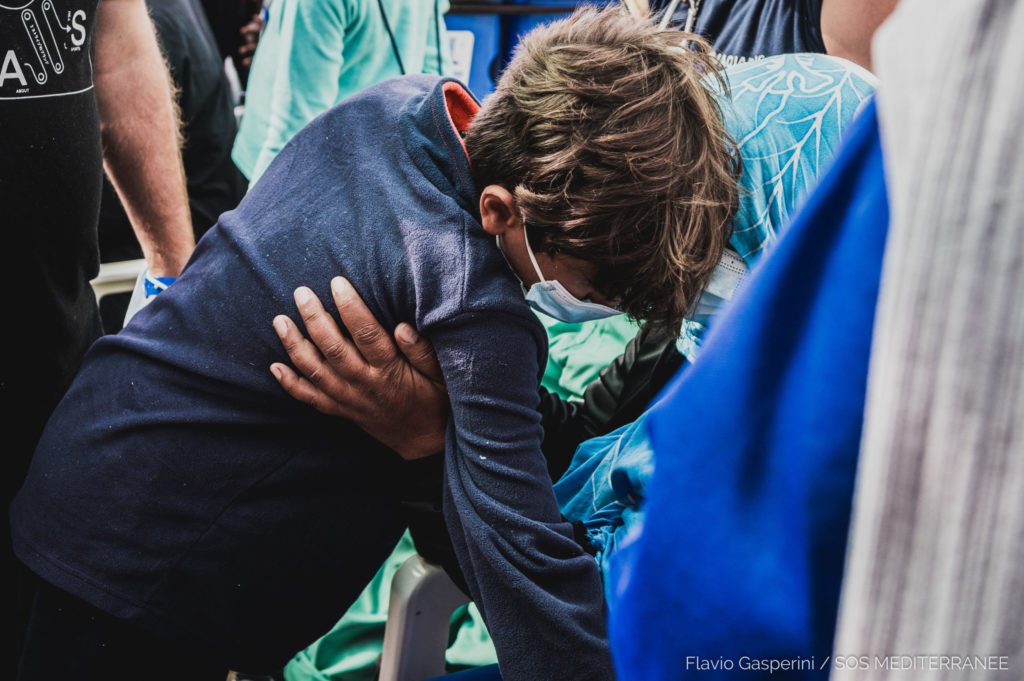 Mouna* is 53 years old, she was born in Damascus. She was rescued from a small wooden boat in distress by the team of the Ocean Viking on July 31st. She stood out from the time she set foot on the deck of the ship through the calm kindness that radiated from her. Mouna had to be evacuated from the Ocean Viking on August 5 because she needs urgent medical care that can only be provided in a hospital on land. Mouna is sick, she needs a liver transplant. Before she was transferred to an Italian Coastguard vessel and brought to Lampedusa, she shared her story with us.

“I didn’t want to leave Damascus. Two of my sons left Syria because of the war, they fled to Libya. In 2014, someone took a photo of my 17-year-old daughter at a peaceful demonstration, they wanted to arrest her. I can’t describe how important my daughter is to me. So I took her and my youngest son, who was 16, and left to Egypt on a plane. From Egypt, we were smuggled to Libya. We were in Libya when everything happened there, the unrest, the war.

My husband stayed behind in Syria. One day, a rocket destroyed our house in Damascus. Luckily, they were warned in time and my husband was not inside. After the rocket strike, we decided my husband should come to Libya as well. We all stayed in Libya, my daughter got married to a Syrian man there. One day, my son-in-law was robbed while he was working, the men were armed like militias. They shot him in the back.

Soon after, my husband and my younger son were kidnapped. The kidnappers asked for ransom. They brought my son and husband back to us, but you should have seen the state they were in. They were covered in blood. We got scared and left to Tripoli, we were hiding in the heart of the capital.

When my husband had to have surgery, he got an infection from the operation. When he found out, his liver was already severely damaged. He kept falling unconscious. There is no medical treatment for this in Libya. There are hardly any public hospitals, only private clinics, so we sold what remained of our house in Syria to raise the money to send my husband to the hospital but they did nothing for him there. They didn’t treat him, they barely kept him alive and one day they just said to us ‘take him’, so we took him back and tried to get care for him at a different hospital, but he didn’t receive proper treatment there either, they just let him die.

There’s no medicine in Libya, there’s no healthcare. We put all our money into trying to get healthcare for him, and they just let him die. We pleaded with UN organisations, we told them everything, we tried to get care for him in Egypt or Tunisia but they said ‘no, stay in Libya’.

If I go back to Syria, I will be arrested at the airport because my sons are running away from military service. They would arrest me to pressure my children into coming back.

My children in Libya have young children, they shouldn’t cross the sea. But I am sick, if I don’t go, I will die anyway. So I decided to leave. I gave the smuggler 2,500 Dollars for my first attempt to cross, but the Libyan Coastguard stopped us. Then they put me into jail. That jail, I cannot describe it. They wanted 200 Dollars to let me out. That jail …

My children got me out of there, but I was so weak. My kids are miserable, it’s hard for them to see me this way and not be able to help, but they don’t have enough money to pay for real medical treatment, they can’t do anything to get me help.

I decided to go to the sea again. My kids said no, they didn’t want me to go, but I made up my mind. I don’t want to die in Libya. There is no healthcare there, there are no services. We have nothing there, no school for the kids, no education, no safety. They beat everyone there. One day, we had a big rock thrown on our car, they stole our money, our phones, our car, they beat us up and just left us lying on the ground.

I told myself ‘enough’, I will go to the sea. I paid 1,500 Dollars this time, and I told them that I’m sick, that I need to leave soon. They said we’d leave the next day, but they kept me waiting for 16 days with no information, nothing. Then they came out of nowhere and took us to the beach. When the boat arrived and we were still on the beach, the engine of the boat exploded. We had to wait another day.

The smugglers had promised us there would be two engines, a satellite phone, GPS, lifejackets. There was nothing there. They promised they would give us everything once we were at sea, they just kept pushing us, they all had guns. Someone must have been too slow or made them angry somehow, because one of them just threw the water on the ground and said ‘no water for you!’.

After four hours at sea, the engine just started burning, it caught fire, my leg got burnt. We managed to put it out and one man on the boat got the engine to work for a little while, but we were just going around in circles. The boat was taking water, it was mixed with fuel. After 10 hours, we could see oil platforms. We were just screaming and waving. And then you came up behind us. We thought you were the Libyan Coastguard, but we said, ‘we are dying anyway, we have no water. If they come, let them come.’ But it was you.

I had to cross the sea because I want to live. I want to see my grandchildren grow up. They call me their ‘lovely granny’. When you see your mother, make sure you hug her and give her a kiss.”

***
*The name has been changed to protect the anonymity of the survivor.
Photo credits: Flavio Gasperini / SOS MEDITERRANEE