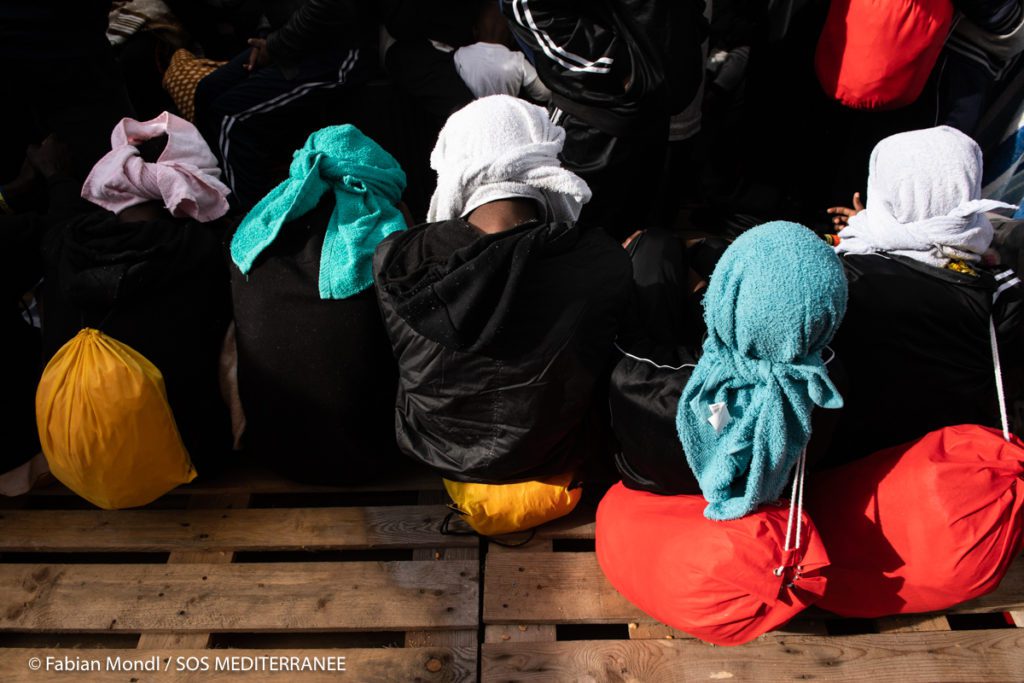 Jenny* was rescued from an overcrowded rubber boat along with her sister [1] in January 2021. On the Ocean Viking, the 25-year-old Cameroonian decided to talk about what she experienced on her journey from her home country to Libya, crossing the Sahara Desert via Nigeria, Niger and Algeria. Once in a safe place, Jenny dreams of working with elderly people.

When Jenny approaches me to tell her story, it is the midwife who offers her consultation room in the onboard clinic so that we can speak in confidence. Sitting on the bed in the tiny room with her sister by her side, Jenny speaks quietly, almost inaudibly, but insists on telling her story.

“My case was really bad”, she starts. “I left Cameroon with my sisters. We arrived in Nigeria. From Nigeria, we took [the road to] Niger, into the desert. At this time, when we took the road to Niger, I was pregnant. But we were launched like that. With all the things they were doing to us, the way they were mistreating us in the desert, I started to bleed. They beat us like animals. They beat us like animals. You have to obey.”

Jenny is only 25 years old, four years younger than me as we are sitting across from each other, but she did not believe she would survive crossing the desert. “I was so sick, to the point where, in the desert, I thought I was going to die. But that was not God’s will,” she recounts. Holding out her hands to show me how much she was shaking at the time, she says she looked like someone who was about to die. “But by the grace of God, we got out of there”.

From Niger, Jenny made it to Algeria. She recounts a cycle of exploitation, working endless hours in bars without pay, having almost no personal freedom. Jenny and her sisters finally escaped the place they were staying in along with other women from her natal Cameroon. With the help of acquaintances in Algeria, they gathered the money and left, through the desert again, crossing into Libya.

When they set off into the desert, Jenny was still sick and weakened. “I had no strength,” she says. “I walked and fell. I walked; I fell. When we crossed the border from Algeria to Libya, I fell. A guy came to lift me up. I started to walk; it didn’t work. He let go of my hand. I wanted to walk; it wouldn’t work.” Separated from the group she was making the crossing of the desert with, Jenny was caught by armed men.

“When they stopped me, I tried to shout once. That’s when they closed my mouth. There were four of them. It was in the night.” Unable to find the other people Jenny was travelling with, the men assaulted Jenny. “They raped me”, Jenny says. “They took my phone that I had on me. They searched me. They found the money I had on me. They took everything. They raped me.”

Jenny’s sister is holding her hand. Both are crying, but Jenny wants to continue talking about this night in the desert. The ‘guide’ leading the group through the desert was the first to realize that Jenny was missing. While the group waited further away, he went back to search for her. “Everything that happened there, the whole scene, he saw. But he couldn’t do anything. They had weapons. All four of them there, they had weapons”, Jenny explains. “The weapons were all over me.”

Jenny recounts leaving her dress and the wig she had been wearing behind where she was assaulted. After the attack, she was disoriented. “I didn’t know where I was anymore. I was just walking and asking God that I could find my people. I was alone. I walked, I walked.” When the guide found her and she was finally reunited with the group, people realized what had happened. “Everyone started to cry,” she says. “Everyone was in tears.”

Jenny isn’t ready to talk about what happened to her and her sisters in Libya. She says they were kidnapped again, but her voice breaks. “To protect ourselves, we pretended to be pregnant,” she says. “We put juice on our pads to pretend we were bleeding. Just so no one would touch us.” Jenny and her sister are sobbing, I turn off the voice recorder. Both sisters look exhausted. It’s enough.

***
Testimony collected by Julia Schaefermeyer, Communications Officer onboard Ocean Viking, in January 2021.
**Name has been changed to protect the identity of the survivor.
[1] The testimony of Jenny´s* sister Rita* can be found here.
Photo credit: Fabian Mondl / SOS MEDITERRANEE