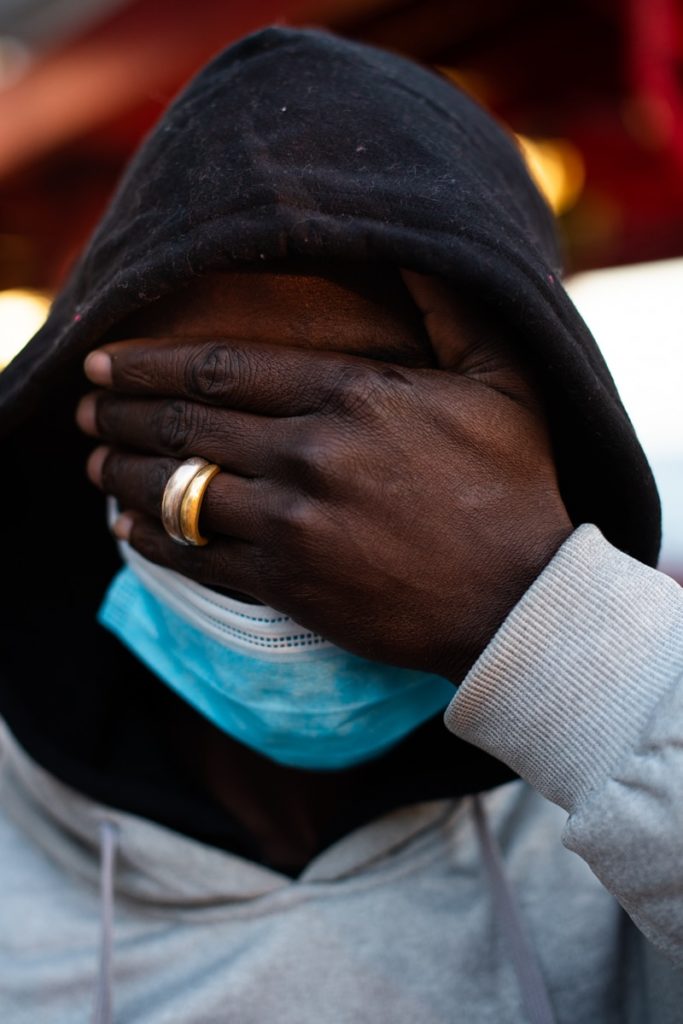 Samy*, 16 years old, from Nigeria/Cameroon, shared his story with us after being rescued by the Ocean Viking in January 2021. He is an unaccompanied minor, but despite his young age, his story reads like a whole lifetime of hardship.

„My father is from Nigeria, my mother from Cameroon. They separated when I was still a baby, I stayed with my mother until I was 4.

Then my father wanted me to come live with him, so I was sent to Nigeria, where I stayed for four years. Boko Haram was already active then, and it was decided that I should flee from Nigeria back to Cameroon, away from Boko Haram.

When I tried to cross the border to Cameroon, I was taken by armed men, I don’t know who they were. They were Nigerians, maybe they belonged to Boko Haram, maybe not. I must have been around eight years old then, or nine, I didn’t know what was happening. They locked me up in a room and kept me there for four days. They didn’t want me to cross the border into Cameroon. I still have problems with one ear because of how they beat me, I hear a constant sound in that ear ever since.

When they let me go, they left me out somewhere, I didn’t know where I was. At this time, Boko Haram was often cutting the network, so I couldn’t reach my family. I lived on the road for 3 months. People gave me food and shelter.

When I came back to my village, there was no one there anymore. My family was gone. Everybody fled. This was near Mubi.

I made it to Yola, and finally crossed back into Cameroon. I saw my mother again in 2013 – after I had not seen her in 5 years. But she had got married in the meantime, I couldn’t stay, there was nothing there for me.

I finally left Cameroon in 2016. I went to Niger first. To Agadez, and then to Arlit. I didn’t have any money for the journey, so I had to work everywhere I went. In Agadez I sold candy and other food. Sometimes people gave me money. I saved everything.

In Arlit, I was captured by the Nigerien army and sent to prison. I don’t know how long I was in prison for. It was a man from the border police who released me. I was so famished and so small, he had pity. He was a Muslim man as well.

From Niger I crossed the border into Algeria. I worked there as well, I learned to mix cement. I was lucky, I was able to hide on construction sites to sleep. When they catch you, they can take everything.

In Libya, I was sold twice, the first time in Ghadames. I was sent to Zintan, where I was held in a house. I was not allowed to leave. I was starved, I was given electric shocks, beaten. They call your family to ask for ransom. These things happen, that’s Africa.

I was sold a second time in Zuwara, this time to Sabratha.

I paid 1000 Euros to a smuggler to cross the Mediterranean.

*The name was changed to protect the identity of the survivor.
Photo credits: Fabian Mondl / SOS MEDITERRANEE