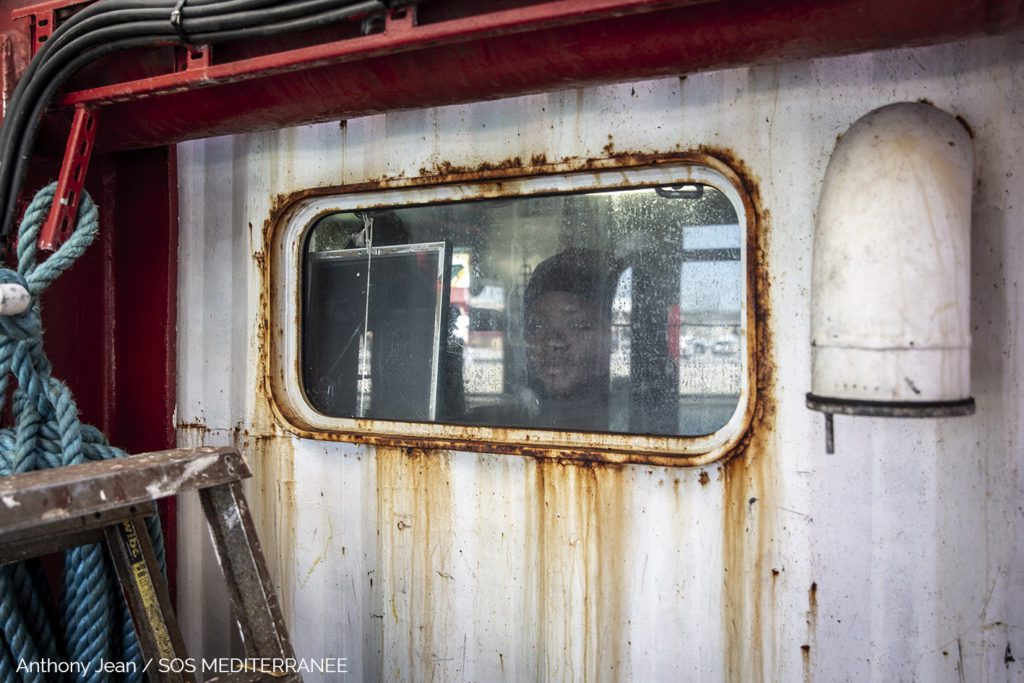 Aya* is 22 years old and from Ivory Coast. She was rescued on February 19th, 2020, along with her husband and daughter, in international waters off the coast of Libya, by the Ocean Viking.

“In Libya, I was locked up between four walls most of the time. I didn’t go out much. I mainly lived in Zawiyah and Bani Walid. There, African women with black skin barely went out. Most of the time, people say that if you are not careful, that is to say if you go out, people would kidnap you to sell you, send you to prison here and there, and demand ransoms. If you don’t have money, they can rape you. They can even come where you stay. Even men get robbed. Women cannot defend themselves. Even if you are married, if God is not with you that day, they will rob you and they will rape your wife. I almost became a victim of this, but God kept me from it. I almost got raped.

It was on a Thursday, we wanted to go to the market. Women only go out on Mondays and Thursdays, on market days. I took a taxi with two of my friends. Usually our men would come with us, but that day they couldn’t. Market days are the only days when women can relax a bit. Go out, see the city… so we left with a taxi. But the taxi driver did not take us to the market where we had asked him to go. I did not know enough about the place. It was my friend who said “no, this is not the right way. Where are you going? “. He said we just had to be quiet, otherwise he would kill us. There, he pulled out a weapon, a pistol, to scare us. I think he first intended to sell us. But God didn’t want to, that day he couldn’t sell us. So, he said he wanted to have sex with me. He said in English, “You, me fuck you”. I said “no, I’m married”. He said that it didn’t matter, he could do what he wanted. I said no. He said there was no discussion. I said again “no, I’m married, I’m with my daughter even”. He said: “even if your daughter is there, I do what I want.” He said that if he wanted to have sex with me, he would sleep with me. I started to pray, pray, pray. All the Gods I know, I called them that day. I prayed that this problem would not happen to me. It was not easy. But a friend of mine, who was sitting behind him, tightened his neck, then she and I grabbed his gun. There, we pointed his gun at him and told him that if he didn’t drive us to the right place, we would kill him. It was not easy. He had parked in a bush; we didn’t even know the place but God made us able to threaten him, so he brought us back where he took us.

Even when you work for Libyan families, it is not easy. Can you see my hand? All of it has been injured in Libya, all my fingers. I worked as a housekeeper. But if one of their sons wants to sleep with you -and often even the father wants to sleep with you- if you don’t accept, they don’t pay you. It’s your money for the month that is at stake. I have worked with two families. The same situation happened each time. I refused every time, it’s not a question of money! But they will scare you.

My husband worked in construction. His boss was a nice person. He gave him a card that allowed for him to move around, to go to work and come back. If the police arrested him, he would show his card and the police would let him go. However, he was kidnapped several times. His card protected him from the police, but if bandits catch you, it’s over for you. This is my third attempt to flee by sea. The two first times, we were caught by the Libyans [editor’s note: the Libyan coast guard] and taken to prison. My daughter was two years and a few months old.

In Libya, they say: an eye for an eye, a tooth for a tooth. Everyone is responsible for themselves.

In prison, women pay more to go out. They know that women are afraid and cannot run away, especially when they have a child, while men are more likely to be able to escape.

Even to wash you, it is the men who do it. They tell you to undress, completely naked even, they take the pipes themselves and you are washed like that. They take women to a corner, they can be two, even three people to rape a single woman. Then they throw you in a cell. I saw women leave and come back after this. Imagine how they were. They were destroyed, they wanted to kill themselves. They had lost their dignity. It’s very, very hard to see. It is very scary. In prisons, rapes are daily. And often they want to do it with the same woman… do the same thing as yesterday.

One day they caught a baby. They hit the mother. Beat her, beat her, beat her. Supposedly, she only had to call her parents to send the requested ransom. But she had no parents who could pay her ransom and she had no husband. One day, they took her baby, they dug a hole and put the child inside and started pouring sand up to his head. The child was screaming, crying, crying, crying. After 10 minutes, they removed the child to return him to his mother.

Another time, I was with a woman whose face was completely burned, her hand, her arms, everything was burned. She had a baby too. They had no mercy. If you don’t have money there, you’re going to die.

To go out of prison, my husband and I called older brothers back in our home country, our dads. My husband’s older brother sent the money so that we could go out. Our families regrouped to be able to pay the ransoms.

*Name has been changed