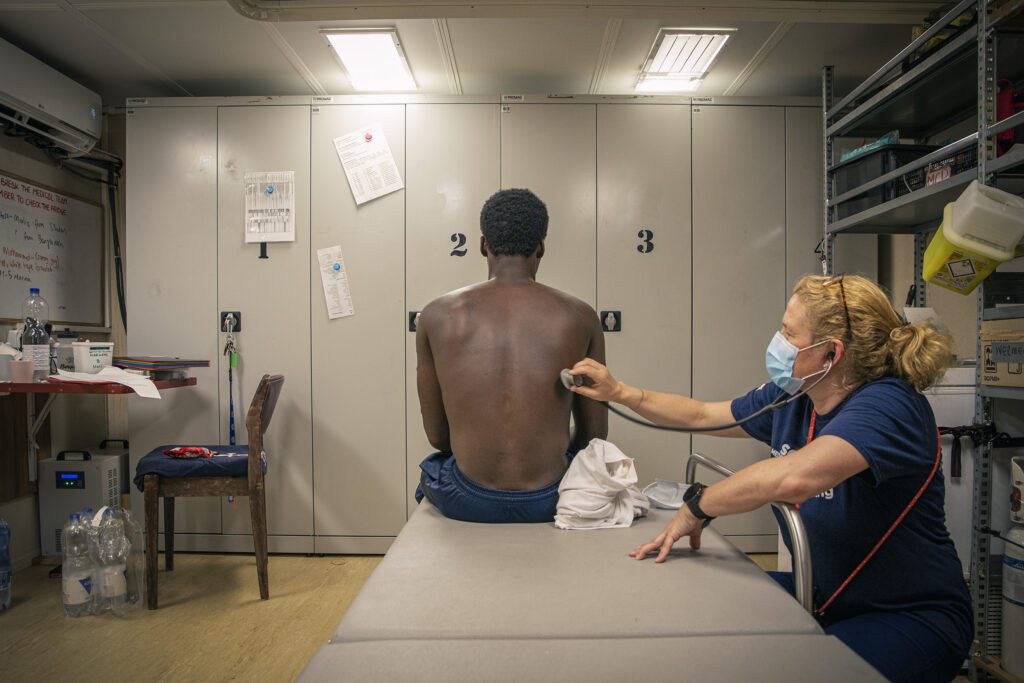 Samuel*, 17 years old, was rescued on June 26, 2022, by the Ocean Viking from a boat in distress in the Libyan Search and Rescue Region. After a first attempt to flee Libya, he was intercepted by the Libyan coastguard and put in jail. He shared with us the violence and abuse he suffered in prison.

“In 2010, during the crisis in Ivory Coast, I lost my father. After his death, I had no one to take care of me. I never went to school in my life. I learned to speak French with my friends who had this opportunity. As I grew up, I realised that I would have no future in my country, so I took the road to Libya to work. I crossed Mali and Algeria through the desert and arrived in Libya. I stayed there for two years but life was extremely hard and violent. That’s why I decided to cross the Mediterranean, to come and earn my freedom because in Libya there is no freedom.

The first time I crossed the sea, people I was traveling with died. The conditions were horrible. The waves were huge. The water was cold. Our boat was intercepted by the Libyan coastguard. I was sent to prison and after a few weeks I was transferred to another prison.

The scars on my arm and my head happened when I tried to escape during the transfer between prisons. The guards caught me and beat me for three days. There were four Libyan guards who took us into a house. One of them had a knife, others had weapons. They beat us until we were lying on the floor. We were seriously ill. I lost a lot of blood that day. My scars still hurt, in my nerves. Sometimes I stop in front of the mirror to look at myself, I have tears in my eyes. I have done nothing to deserve this kind of life, but in Libya there is no law, everyone has guns.

To reach the boat – to flee that hell – we first walked for 4 kilometres before arriving to the sea. There were pregnant women, sick people. After several hours, when I saw the Ocean Viking arrive. I couldn’t say a single word because I was so happy. I understood that I had my freedom back. That I was safe.”

*The name was changed to protect the identity of the survivor.